Usefulness of Altitude Compensation for All Rockets.
I have argued altitude compensation has importance not just for SSTO's but for all launchers. For SSTO's it can double the payload possible. This leads to the unexpected conclusion that for both expendable and reusable rockets SSTO's with altitude compensation can be more cost efficient than two-stage rockets:

But in that blog post, it is also shown that even for two-stage rockets such as the Falcon 9 altitude compensation can improve the payload 25%.

Another important application of it is that it makes it possible for low cost pressure-fed rockets, using multiple cores, to be able to do orbital launches. This brings orbital rockets within the range of even university aerospace departments and amateur rocket developers. Or as I like to say it:

Also multi-cored rockets such as the Delta IV Heavy and Falcon Heavy can double their payload by using cross-feed fueling in conjunction with altitude compensation:

This is important because by doubling the Falcon Heavy payload to ca. 100 metric tons, this brings it in the range to do a manned lunar landing mission with a single launch. Also key is that it brings it close to the $1,000/kg price range space advocates have argued is necessary to allow high launch rates and additional cost reductions by volume.

For these reasons it is important to investigate altitude compensation techniques whether or not you believe in the value of SSTO's. Ironically, though once these techniques are applied to existing rockets, it will become apparent how valuable SSTO's are.

In fact part of the point I'm making is the number of ways of accomplishing it at low cost. I'll describe two others here.

The term "impulse pressure" or "impulse pressurization" is hardly standard. What I mean to say by it is illuminated by this image showing nozzles not optimized to altitude:

Rocket engines achieve their best efficiency at vacuum conditions with a large nozzle that allows the exhaust to expand out to near vacuum ambient pressure. However, having a large nozzle at sea level can cause unstable flow that can even tear apart an engine. It's referred to as "flow separation" and is illustrated in the bottom image.

Then the idea behind the "impulse pressurization" is to use a large nozzle at sea level but direct a portion of the exhaust flow out towards the sides of the nozzle to counteract this flow separation. That is, use the momentum, the impulse, of the flow to provide outwards pressure against the walls.

There are two ways this outwards impulse can be provided: you could have the exhaust be swirled by vanes within the nozzle to cause an outwards momentum to the flow or you could have the exhaust be deflected outwards by a shelf within the nozzle that is at an angle to direct the portion of the exhaust near the walls, outwards to impinge against the nozzle walls.
Note that for both of these methods you don't want most of the flow to be swirled or directed outwards but only the portion of the flow near the walls. Note also the swirl vanes or deflecting shelf can be rather far down towards the bottom of the nozzle since the degree of flow separation usually is far down towards the bottom of the nozzle. So for both of these methods most of the thrust attained at vacuum will be maintained at sea level.

Additionally,  as the rocket increases in altitude the ambient pressure decreases and there is reduced need for this outward pressure. So the portion of the exhaust that is directed outwards will be reduced as the rocket gains altitude, to the point that the full exhaust will be allowed to flow directly downwards when the rocket reaches near vacuum. This can be done in either method by changing the angle of the swirl vanes or deflecting shelf to gradually decrease to null as the rocket achieves altitude.
(Patent pending.)

An Earlier Patent?
I have found one patent that attempts altitude compensation by a swirling exhaust flow, but not the deflecting shelf method:

3,443,384
SWIRLING FLOW NOZZLE.
James _E. Webb, Administrator of the National Aero
nautlcs and Space Administration with respect to an
invention by Frank X. McKevitt, Palos Verdes Penin
sula, Calif.
Filed May 17, 1967, Ser. No. 640,787
Int. Cl. F02k 1/02, 9/00; B05b 3/00
U.S. Cl. 60--263 4 Claims
ABSTRACT OF THE DISCLOSURE
This disclosure relates generally to rocket engines. It
teaches a method and construction for increasing the effi
ciency of a rocket engine by matching its exhaust gas
pressure with changing ambient pressure. Essentially, a
gas is introduced tangential‘ly into the engine so as to form
a vortex within the nozzle. The size of the vortex can be
used to vary the effective throat area of the nozzle. The
size of the vortex can be changed by varying the relative
amounts of axial and/or tangential flow of gases to the
nozzle. 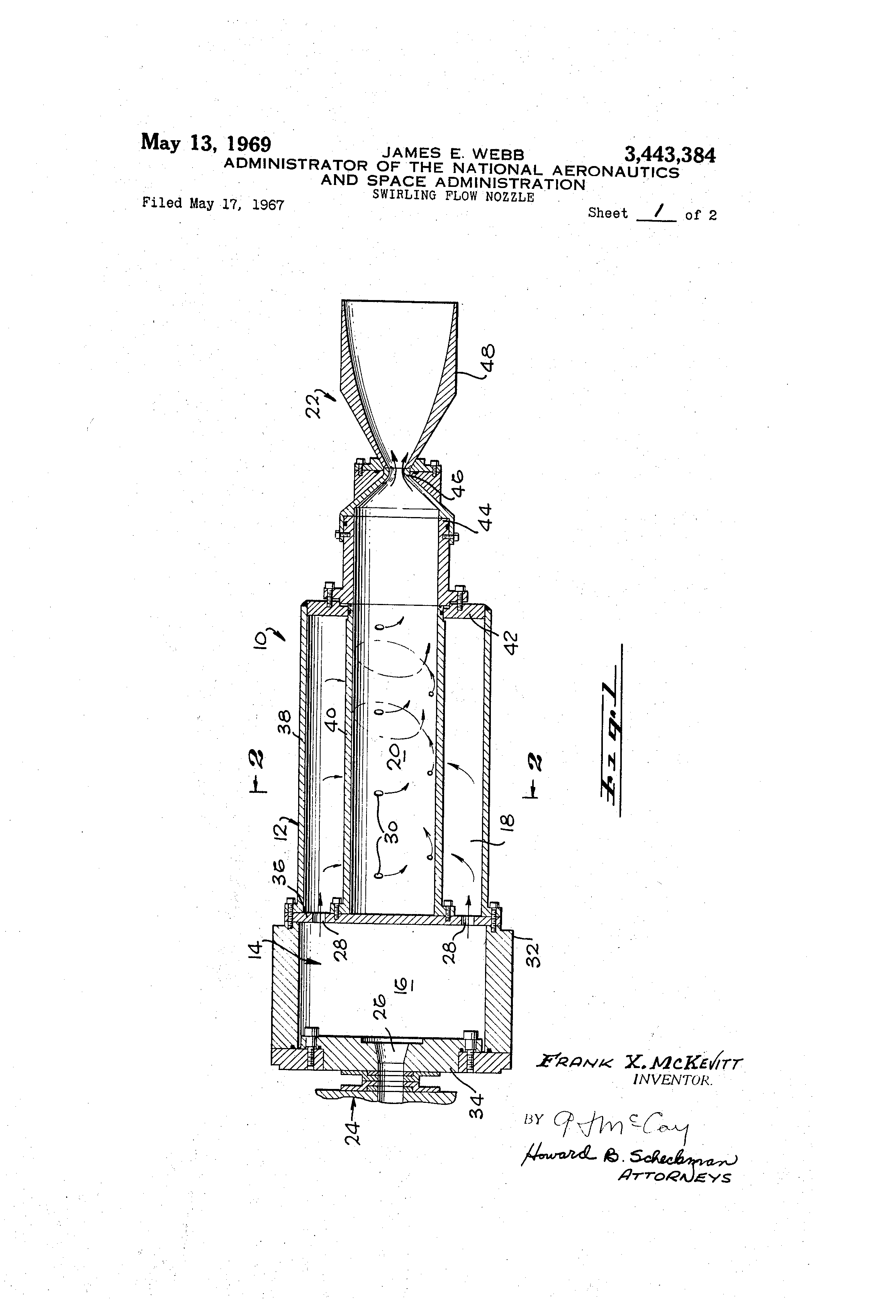 There are some differences. This attempts to swirl the combustion gases right within the combustion chamber and thus induce a swirl within the entire exhaust flow inside the nozzle. In contrast, my method will attempt to maintain a large proportion of the vacuum thrust and Isp by only inducing the swirl near the bottom of the nozzle and only for the outer portions of the exhaust flow.

But a key distinction is that my proposal could be attached to the nozzle of existing engines. That is important to maintaining the idea that altitude compensation is simple and low cost to accomplish.

Orbital Technologies Corp (ORBITEC) is investigating swirling, vortex motion within the combustion chamber of their engines:


UPDATE, January 18, 2016:
I used the term "impulse pressurization" to describe the pressure provided by a portion of the exhaust flow directed to impinge on the nozzle walls.
Actually, there is a term in common use for this concept, called "dynamic pressure". For instance during rocket launch, rockets have to be throttled down during the period called "Max Q" where the sum of the ambient pressure at altitude and the force pressure due to the air flow at high speed is at a maximum.

So I could have called this idea "dynamic pressurization".
Posted by Robert Clark at 12:54 PM