Hovering capability for the reusable Falcon 9, page 2: Merlin engines in a pressure-fed mode?

It is understandable that SpaceX wants to use the "hover-slam" approach, which allows no hovering capability, for their vertical landings of the Falcon 9 first stage. This means they would have to make no modifications to their rockets. However, it has always been taken as a given that vertical landing reusable launchers would have hovering capability:

In the blog post "Hovering capability for the reusable Falcon 9", I suggested various attachments to the Merlin engine nozzles that could serve to give the first stage hovering ability. Here I'll suggest some methods that will provide different means of producing lower thrust from the engines.

The Merlin's are turbopump fed engines that use moderately high chamber pressures to produce high thrust. But what we want for the landing is actually low thrust. Then rather than using the turbopumps can we use the engines in a pressure-fed mode? The idea will be that during landing the propellant is presented to the engines using the pressurization from the tanks alone, bypassing the turbopumps.

Another possibility is to just use the usual piping that goes into the turbopumps but insure the turbopumps are turned off during this mode. There are various types of operating cycles used in rocket engines however. Is the gas generator engine cycle used by the Merlins amenable to this mode where the turbopumps are not turning and the propellant is allowed to flow straight through from the tanks into the engine? 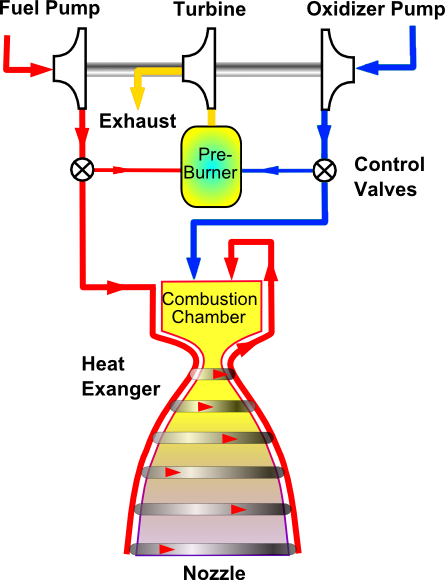 Gas-generator rocket cycle. Some of the fuel and oxidizer is burned separately to power the pumps and then discarded. Most gas-generator engines use the fuel for nozzle cooling.

For instance, with the relatively low fuel flow possible without the turbopumps would this supply sufficient cooling to the combustion chamber and nozzle?

There is also the question of how much thrust you can get at this low pressure. Typically for pump-fed engines, the propellant tanks are only held at pressure ranges of about 2 to 3 bar. Necessarily then the pressure within the combustion chamber would have to be even lower than this. You would then have the problem that the pressure in the combustion chamber would be only slightly higher than the surrounding air pressure at sea level, making it difficult to get net thrust. If it does work, likely you would need to use more than one Merlin for the landing, possibly all of them,

Another possibility for getting lower thrust would be to emulate the "thrust augmented nozzle" proposal of Aerojet. This works in analogous fashion to an afterburner for fighter jets. It would inject additional propellant into the nozzle to get higher thrust, so you have actual combustion going on both in the combustion chamber and in the nozzle.

A modification to this idea would be to just inject the fuel, not the oxidizer, into the nozzle. Since this is to be used just for landing you would have sufficient air for combustion. The advantage of this is that you would save on the total propellant required for the landing since the oxidizer would not be used.

If the Merlin can not be made to be pressure-fed, SpaceX does have a pressure-fed engine, the Kestrel. It was used on the upper stage of the Falcon 1. It had an approx. 3,000 kilogram-force vacuum thrust. Being an upper stage engine it would have reduced thrust at sea level.

Moreover, it was designed for the 200 psi tanks of the Falcon 1 upper stage. The Falcon 9 tanks, for the pump-fed Merlins, would be at lower pressure, perhaps in the 50 psi to 100 psi range. This would mean the thrust would be even further reduced.

For a ca. 15,000 kg dry mass F9 first stage you might need 8 to 10 of the Kestrel's with their reduced sea level thrust. The mass penalty would not be severe since they only weighed 52 kg. And they would weigh even less than this in this application since you would greatly reduce the nozzle size to operate at sea level. There is also the fact that for a first stage, extra mass added to the stage only subtracts a fraction of this added mass from the orbital payload capacity.

Ariane 5 Core plus 4 Ariane 4 side-boosters as a manned launcher, page 2: use as another ISS supply vehicle.

In the blog post "Ariane 5 Core plus 4 Ariane 4 side-boosters as a manned launcher", I suggested such a configuration would give a quicker, cheaper implementation of the Ariane 6 that would have the advantage that it could also be used as a manned launcher.

A recent news report gives this even greater importance, the fact that France wants to sell its stake in Arianespace to Airbus Safran:

GEO satellite launcher.
The calculation for this configuration without an upper stage was for 15 metric tons(mT) to LEO. Much of the satellite launch market however is to geosynchronous orbit. Using an existing upper stage for this version would eliminate another development cost for the current version of the Ariane 6 which envisions a new large upper stage using the new Vinci engine.

For this configuration use instead the already developed Ariane H10-3 upper stage. This has a 1,570 kg dry mass, 10,470 kg propellant mass, 62.7 kN vacuum thrust and 446 s vacuum Isp. Plug these numbers in for the upper stage into Schilling's launch performance calculator with the same numbers for the Ariane 5 core and Ariane 4 liquid-fueled side-boosters as used in the "Ariane 5 Core plus 4 Ariane 4 side-boosters as a manned launcher" post.

For GEO satellites the launchers actually send the satellites to geosynchronous transfer orbit (GTO) which is a highly elliptical orbit that reaches from LEO to GEO, with the satellites onboard propellant and engines providing the final kick to a circular orbit at GEO. For the GTO orbit, enter in Schillings calculator the default perigee of 185 km, 35,000 km for the apogee, and an inclination of 5.2 degrees to match the latitude of the Ariane launch site. Then the calculator gives the results:

"Payload" refers to complete payload system weight, including any necessary payload attachment fittings or multiple payload adapters
This is an estimate based on the best publicly-available engineering and performance data, and should not be used for detailed mission planning. Operational constraints may reduce performance or preclude this mission.

Also, ESA is considering some versions of the reusability in returning the engine compartment of the core stage. However, by using liquid side boosters you can make the side boosters reusable as well by doing a vertical landing on those.

Inexplicably, in ESA trade analyses of liquid-fueled versions for the Ariane 6 versus solid booster versions, no consideration was given to the major advantage of liquid fueled versions of providing Europe with an independent manned launch capability. Note this all liquid implementation would give a manned vehicle using four liquid-fueled boosters attached to the core stage, as both the
Russians and the Chinese have done to produce their manned launchers. And because of the rapid development time due to the minimal new development needed, Europe could probably field this manned launcher by the time the Americans field theirs, expected in 2017.

Use as an ISS supply vehicle.
Last months failure of the Falcon 9 launch to resupply the ISS reveals another reason such fast development time is important. All three of the current ISS cargo launchers have experienced recent launch failures. Then another launcher to serve as a cargo supply vehicle would be useful. Because it would have a short development time and low development cost, this version could serve as valid alternative to the other launchers. Then this opens up another revenue source for this all-liquid version of the Ariane 6.

Moreover, the Cygnus capsule, being European, could also be used as a low cost cargo capsule, rather than the expensive ATV.


Bob Clark
Posted by Robert Clark at 1:27 AM No comments: