The OldSpace companies had always discounted the viability of reusable launchers on the grounds that the launch market was not enough to pay for it. However, a new market will soon be opening up for hundreds to thousands of launches required for the impending satellite megaconstellations. Now even the OldSpace company ArianeSpace is speaking of transitioning to reusability.

So with reusability soon to become prevalent we have now further justification for resurrecting the X-33. Boeing supported by a DARPA grant is developing a reusable, spaceplane first stage, the XS-1, then Lockheed with the X-33 would have a competing reusable launcher.

In the blog post DARPA's Spaceplane:an X-33 version, I discussed that the X-33 used as a reusable first stage has importance beyond that of just a test stage of an operational SSTO, the VentureStar. For the X-33 could be its own operational vehicle, cutting costs in its own right as a reusable first stage.  But intriguingly the problems that originally doomed the X-33 and its SSTO follow-on the VentureStar may also be solvable.

As discussed in that earlier post, it was the failure of the composite tanks that caused the X-33 program to be cancelled. But some new high strength aluminum alloys may have the comparable lightweight characteristics as carbon composite tanks.

Carbon composite propellant tanks are a pretty well developed technology, as long as they are cylindrically shaped. But the unusual conformal shape of the composite tanks on the X-33 caused them to fail.

Carbon composite saves about half-off the weight of standard aluminum tanks. But interestingly some new aluminum alloys have comparable high strength at lightweight as carbon composite and therefore could be used to give the lightweight tanks needed.

See for example the graphic: 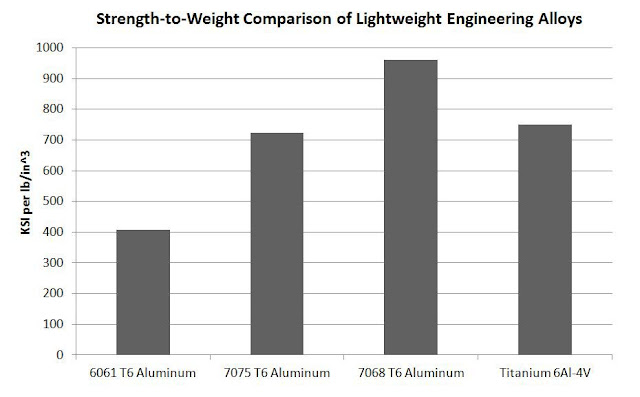 A consideration as described on that page is that 7075 is 2 to 3 times more expensive than the standard 6061 and the 7068 is 3 to 4 times more expensive. But considering that because of their higher strength, smaller amounts of the material by a factor of 2 to 2.5 would be needed the price difference in practice would not be as great.

Note also since it was the inability to produce the composite tanks in the X-33 at the needed lightweight that caused the program to be cancelled, existence of the high strength aluminum alloys make the SSTO VentureStar once again viable.

In the earlier "DARPA's SpacePlane" post, I suggested a smaller version half-size in linear dimensions of the X-33 might cost ca. $45 million to build. This would test the technology and moreover using it as an upper stage of the X-33 would give a fully reusable system.

I've been informed of other other high strength, lightweight metal alloys that could also allow VentureStar to achieve its goal of a being a reusable SSTO, and allow the X-33 to be able to serve as a low cost reusable first stage.

The alloys have various strengths and weaknesses. For example some are are just now being experimented with but their measured strength-to-weight ratio is more than 3 times better than standard aluminum. Some are steel alloys which have better weldability than the aluminum alloys, etc.

For instance in the graphic above, the titanium 6Al-4V alloy is a little better than the 7075 and is already used in rockets for example for solid motor casings.

There is also a high strength steel alloy, the 17-7 PH stainless steel CH 900:

It has comparable strength-to-weight as the 7068, i.e., nearly 2.5 times better than standard aluminum. It also has better weldability than the aluminum alloys.

A recent report shows some high strength aluminum alloys such as the 7075 can be 3D-printed:

This is useful since the high strength aluminum alloys such as the 7075 have poor weldability. But the conformal shapes of the X-33/VentureStar tanks would be difficult to make without welding.

Finally, a titanium alloy known as the Ti185 was long known but it was difficult to produce it so it had uniform strength throughout. A new method of producing it using titanium hydride powder can produce it so it is uniformly strong:

Approaching 1,700 MPa in tensile strength, it would be 3.5 times better on strength-to-weight than standard aluminum. Because it is made of titanium hydride powder, it may also be possible to make it by 3D-printing, which would solve the problem of producing a conformal shape for the tanks of the X-33/VentureStar.

Long-time space advocates will recall back in the late 90's there was a push for large numbers of communication satellites for the purposes of cell-phone communication. This led to the creation of several private launch companies then to serve what was expected to be hundreds to thousands of required launches.

However, it turned out the great majority of cell-phone communications could be served by terrestrial cell towers. The large satellite constellation plans were then abandoned, and those private launch companies then collapsed.

But now once again there are renewed plans for satellite megaconstellations containing hundreds to thousands of satellites, such as OneWeb or SpaceX's StarLink. This time it is primarily for high speed internet service. This time there is billion dollar backing for the projects and there have been preliminary launches to test the idea.

It's very likely now that the projects will take place. For space advocates, an important result of the large numbers of launches required is that it provides a clear advantage for low cost reusable launchers.

SpaceX always believed reusable launchers could be financially feasible. But other space launch providers were skeptical. They didn't think the number of launches under the current market would pay for reusability.

But now with the advent of the new megaconstellation plans even previously skeptical Arianespace plans to transition to reusability. See for example the articles here:

One project Arianspace is planning is called Callisto. It is to be a small sized hydrolox test vehicle to test reusable, vertical landing boosters. It is to be analogous to the SpaceX Grasshopper tests.

However, unlike the SpaceX Grasshopper that used the original Merlin engines and the same F9 propellant tanks, though perhaps only partially filled, the Callisto plan is to use an entirely newly designed and built stage.

I believe this was a mistake. It would have been better if the X-33 itself was to be used as an operational vehicle. It could have been used as a reusable first stage booster to cut costs for a two-stage to orbit system, a la the SpaceX plan:

Then my recommendation is not to repeat the mistake of the X-33 program by instead actually using operational stages to test reusability and vertical landing.

This could be done with two existing Arianespace stages. The Ariane 5 core stage and the Ariane H10-3 cryogenic upper stage. In both cases you would use partially filled tanks, approx. half-filled so that the stage could lift-off on their single engines.

Another advantage of this approach is that it would finally provide Europe with an independent manned spaceflight capability.

In the discussion above I forgot a key point. The most important factor in
regards to cost is not the development cost.
The key cost factor is what they would charge per flight for a reusable
launcher. Robert Zubrin made this point insightfully in one of his books. He
recounts that he made the argument for reusable launchers in his former job
with one of the big launch companies.

He argued that they could cut the cost of launch by an order of magnitude.
The company execs responded: why would we do that? Their view was their
revenue would then be slashed by a factor of ten. They were assuming the
market would still be the same but they would be getting one-tenth the
revenue.

So the OldSpace companies were acting quite rationally in a business sense
in discounting reusability. They were saying the market was not enough to
make it advantageous to them.

But if there were a large market then they would make more money making more launchers at the lower price. That is, the price would be reduced by a factor of ten but the number of launches would be increased by more than a factor of ten.