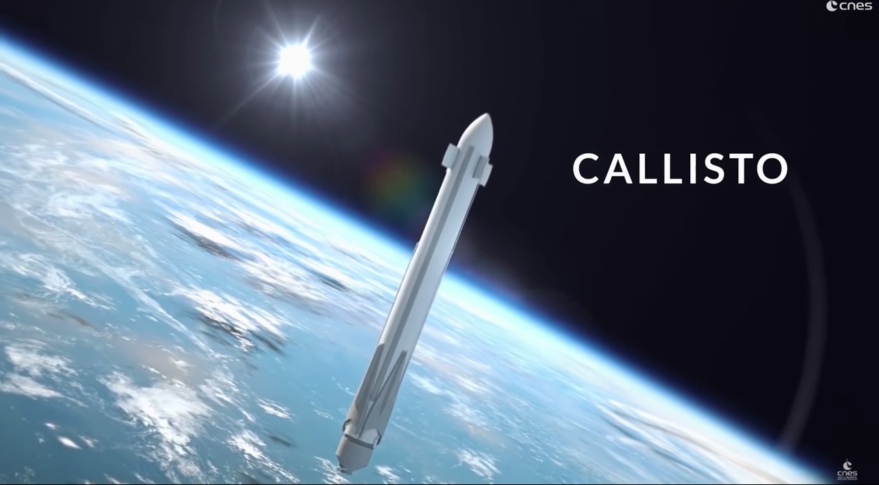 "We are lacking an experience by operation of recovering a vehicle and reflying it. This is exactly what we would like to do with Callisto,” — Jean-Marc Astorg, head of Launch Vehicles Directorate, CNES. Credit: CNES
https://spacenews.com/france-germany-studying-reusability-with-a-subscale-flyback-booster/

The term "flyback"is used in the title of this article but both vertical, powered, and horizontal, winged approaches for return will be investigated.

The plan is for this to be only a demonstrator. However, there is an emergent market for small satellites under 500 kg that is expected to reach $30 billion by 2026:

The size of this market is expected to be helped by the upcoming megasatellite constellations consisting of thousands of satellites for broadband internet communication through space links.

Callisto can be used as an operational first stage booster to launch such satellites, either as expendable or reusable.

I think a mistake of the American X-33 program was that it was only envisioned as a testbed never to be put into service. Since it was testing SSTO capabilities for a much larger, operational SSTO, it had to use lightweighting methods on the tanks such as using carbon-composites that the operational SSTO vehicle called the VentureStar would have used. When the technology for the carbon-composite tanks was not mature enough to become operational the program was cancelled.

Actually, some recent high strength metals are even better than carbon-composites in strength-to-weight ratio, so now even the SSTO VentureStar is now possible:

The engine for Callisto.
The engine now being considered for Callisto is to be hydrogen/oxygen at a 40 kilonewton(kN) thrust, about 4,000 kilogram-force:

However, for the role of being a first stage booster I suggest a larger one would be better. In this case the Vinci engine to have its first launch as the upper stage engine on the Ariane 6 in 2020 would be ideal. 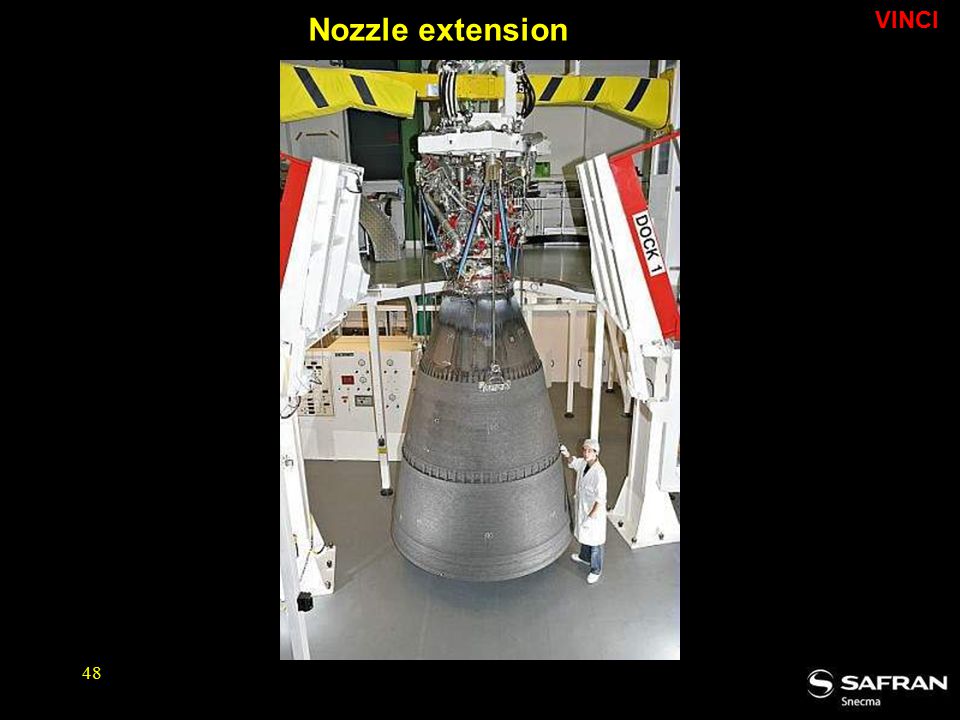 However, such large, vacuum-optimized nozzles can not operate at sea level, since they would be dangerously overexpanded. But another aspect of the Vinci makes it ideal for use as a engine for the Callisto, its use of a nozzle extension: 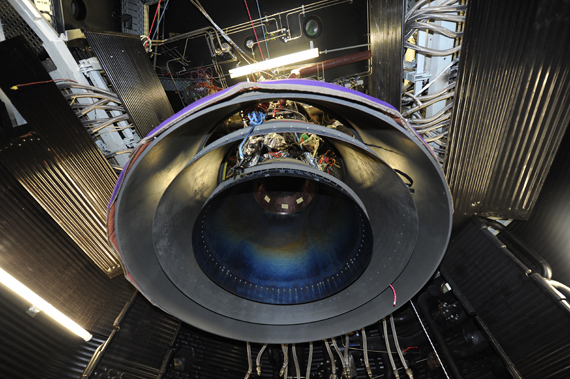 The expansion nozzle of the Vinci engine consists of three parts, which can be telescopically extended in flight.
Credit: DLR.

The use of a nozzle extension would allow the engine to be operated with the nozzle retracted at sea level and extended for high altitude, near vacuum conditions.

Nozzle extensions are used on a few other upper stage engines, notably on the American RL10-B2: 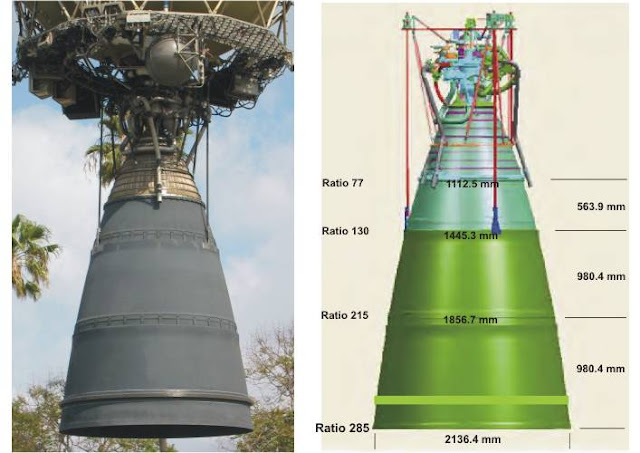 But their purpose is to allow the long nozzle to fit within a shorter length when stowed. They are not extended while the engine firing, only prior to upper stage ignition after the lower stage is jettisoned. However, tests have been run which shows the engine does work even when the nozzle is in the process of being extended:

Another version of a nozzle extension has been known of since the 70's and was always intended to be extended while the engine is firing, an inflatable nozzle extension:

Such nozzle extensions are methods of altitude compensation. This allows engines to have optimal performance both at sea level and at vacuum.

The stage for the Callisto.
The advantage of using the Vinci engine is that it will already be developed so most of the development cost for the engine will already be paid for. To reduce costs further, I suggest the same for Callisto's rocket stage: use the Ariane H10 upper stage at a 11.86 ton propellant mass and 1.24 ton dry mass. We'll swap out the HM7-B engine on the H10 though to be replaced with the Vinci engine.

The Vinci vacuum Isp is given as 465 s with a vacuum thrust of 180 kN , but no sea level Isp or thrust is specified since it's not intended to operate at sea level.

We can estimate a sea level thrust though for the case when the nozzle extension is in retracted position. In the RL10 version with the long nozzle extension, its vacuum Isp is the same as the Vinci at 465 s. So for the Vinci's sea level performance, we'll compare it to a sea level version of the RL10, the RL10-A5 engine. This was the version of the RL10 with a shortened nozzle, used for sea level operation on the DC-X rocket:

Note how short the nozzle is compared to even the standard RL10, without the long version of the nozzle extension: 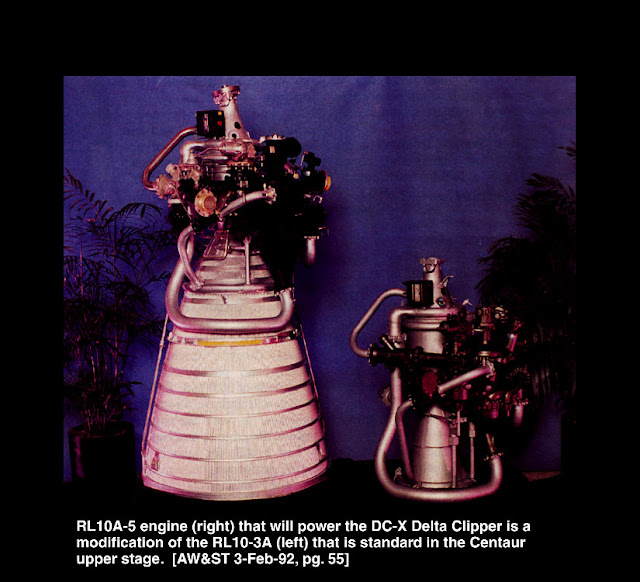 Ideal delta-v to orbit.
A problem with engines with altitude compensating nozzles is calculating the delta-v possible using them. Commonly, for fixed nozzles you can use the vacuum Isp to calculate the ideal delta-v for the rocket. This would be the delta-v if there were no losses for gravity drag, air drag, sea level Isp loss. When these losses are taken into account an ideal delta-v, larger than just orbital velocity, is used to estimate payload to orbit: 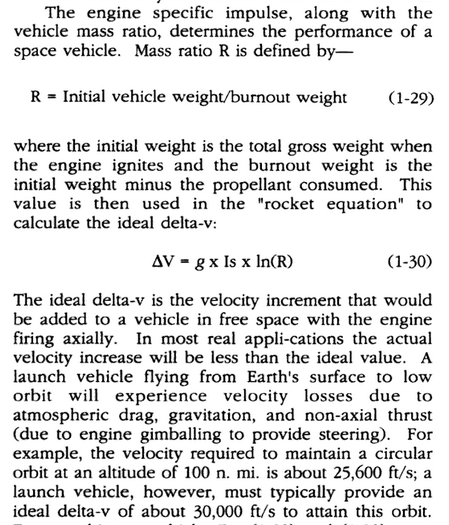 This takes the ideal delta-v for orbit as 30,000 ft/s, about 9,150 m/s while using the vacuum Isp in the rocket equation calculation.

Another article uses another common method to estimate the payload to orbit, using an average Isp over the trajectory:

Towards Reusable Launchers - A Widening Perspective.
H. Pfeffer
Future Launchers Office, Directorate of Launchers, ESA, Paris.
Because rocket propulsion is mandatory to accelerate to orbital speed in vacuum, the most logical design option is to use rocket propulsion from take-off until orbit insertion. Both gravity and drag losses must be overcome on the trajectory to orbit. The ideal velocity increment, Delta V, required from an SSTO-RRL is then about 9000 m/s in order to reach a Low Earth Orbit (LEO). All further considerations concentrate on reaching LEO, because this is the most difficult part of gaining access to space and the major hurdle to be mastered in terms of reusability.
The mass that can be accelerated into orbit using rocket propulsion is given by the equation: M 1 /M 0 =exp ( -Delta V /V E ) where M 0 is the mass at take-off, M 1 is the mass which has received the ideal velocity increment Delta V, and V E is the ejection velocity of the rocket engine.
For a given Delta V, which is mission-imposed, the mass ratio M 1 /M 0 increases with increasing V E . The highest practical rocket ejection velocities are achieved by burning hydrogen with oxygen in a combustion chamber and ejecting the produced gases through a convergent/divergent nozzle. When averaged over the trajectory, the exhaust velocity V E is in the order of 4000 m/s. The corresponding mass ratio to reach LEO is: M 1 /M 0 =exp(Delta V /V E ) = exp ( 9000/4000) = 0.1054 = 10.54%
http://www.esa.int/esapub/bulletin/bullet87/pfeffe87.htm

In this case, using an average Isp, the ideal delta-v to orbit is taken somewhat lower at 9,000 m/s. In any case the delta-v to orbit depends on several factors such as T/W ratio, altitude and inclination of orbit, etc.

Commonly for rocket engineers the vacuum Isp is used. But that becomes doubtful with a non-fixed nozzle, such as when using altitude compensation.

Lacking an average Isp in the alt.comp. scenario, I'll use the vacuum Isp in the calculation.

However, a true trajectory simulation over the entire flight using altitude compensation needs to be done to calculate the average Isp in this scenario to get a more accurate estimate of the payload.

Calculation for the TSTO Callisto.
I'll just calculate the expendable case here. Once it is seen how much payload is possible, the Callisto developers can determine the best ways to add reusability systems.

A problem at the start is the Ariane H10 stage with the Vinci engine added is at 13.1 tons gross mass, while the Vinci estimated sea level thrust is just in the 13 tons range.

We could ramp up our thrust above that of the nominal thrust. For instance the space shuttle main engines had their thrust increased 9%. And the Merlin engines had their thrust increased 15%. If we could ramp up the thrust 9%, the sea level thrust of the Vinci would be at 14.2 tons. One method for ramping up the thrust is varying the mixture ratio. Increasing the LOX content compared to the LH2 would give the exhaust more mass and more thrust, though at a loss of Isp.

Then with a .76 ton payload the delta-v would be:

But it must be noted this is under the simplification of just using the vacuum Isp of the Vinci. A more accurate, probably reduced, payload needs to be found under a more accurate calculation using the varying Isp for the altitude compensating nozzle.

Calculation for the SSTO Callisto.
It is interesting to calculate the delta-v of the stage with no upper stage and no payload:

The payload as an SSTO is surprisingly close to that as a TSTO. This is undoubtedly because of the rather low thrust of the first stage compared to the stages gross mass, which limits the size of the second stage that can be used.

We'll reduce the propellant load to 10 tons. The reduced propellant load in the first stage allows us to carry a heavier upper stage. We'll use the Star 37X. It carries a 1,070 kg propellant load, at a 80 kg dry mass and 296 s vacuum Isp. Then we can get 690 kg to orbit under the TSTO case:

European space agencies and industry have just announced they will be investigating reusable TSTO and SSTO launchers with the RETALT program: https://www.retalt.eu/project/#RETALT2

For such an experimental program, it will be much easier and cheaper to add altitude compensating additions to existing engines rather than developing whole new engines from scratch.