Can we adapt the Antarctica IceCube Neutrino Observatory drilling technique to explore the subice oceans of Europa?

The IceCube Neutrino Observatory was able to drill down 2.5 kilometers rapidly into the ice in Antarctica using a relativly simple method using heated, pressurized water. Can we adapt this to reach the subice oceans on Europa?

Here is a published description of the drilling method:

The total power for drilling a 60 cm wide hole was 5 MW. The great majority of this was the thermal power of 4.7 MW for melting the ice.

For just sending a small probe beneath the ice we'll make the hole width smaller by a factor of 10 to 6 cm, 2.4 inches. A probe of greater capabilities will be obtained by simply making it longer, while keeping it the same width.

The required power will scale by the cross-sectional area to 50,000 watts, 50 kW.

In this blog post I noted the Falcon Heavy can send a 1 ton spacecraft to the surface of Europa using currently existing in-space stages:

The aerospike is a method of altitude compensation for a rocket nozzle that provides the optimal expansion for the ambient air pressure all the way to orbit. Two ways of doing this is one, to use a toroidal combustion chamber and exhaust the flow down the sides of the spike. 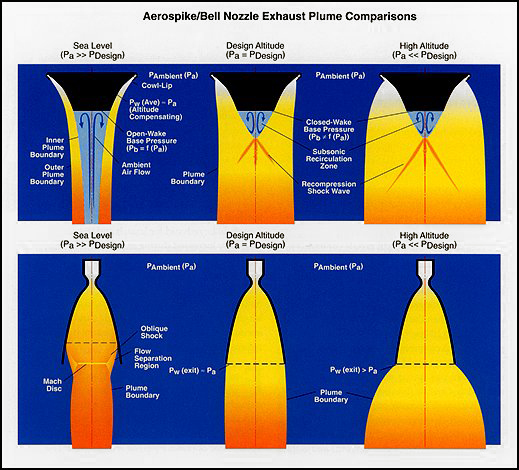 Another way is to use multiple small combustion chambers that each separately exhaust down the sides of the spike. 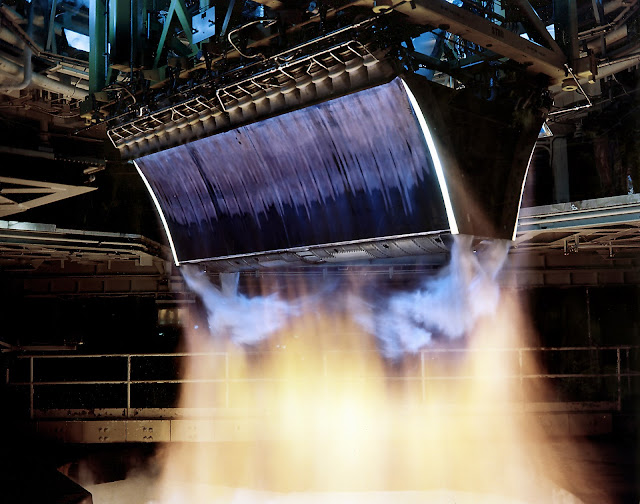 In both cases the exhaust flow is initiated at only the top of the spike. However, a problem is converting a cylindrical combustion chamber to a toroidal one is an expensive process.

Another problem would be for the case of a Falcon 9 or a SuperHeavy where the entire base area is covered by the multiple engine bells there would be no room to place a spike below it. 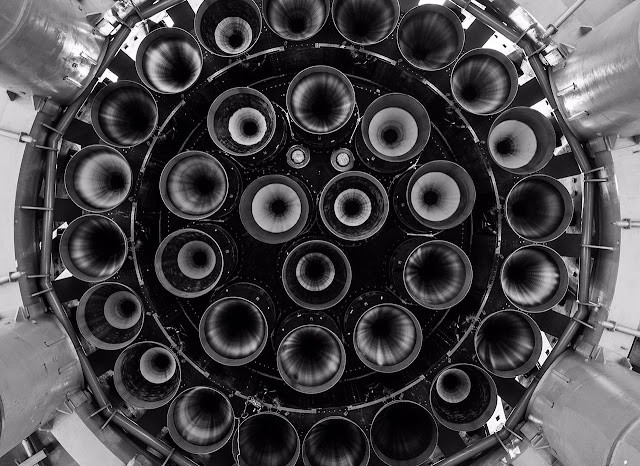 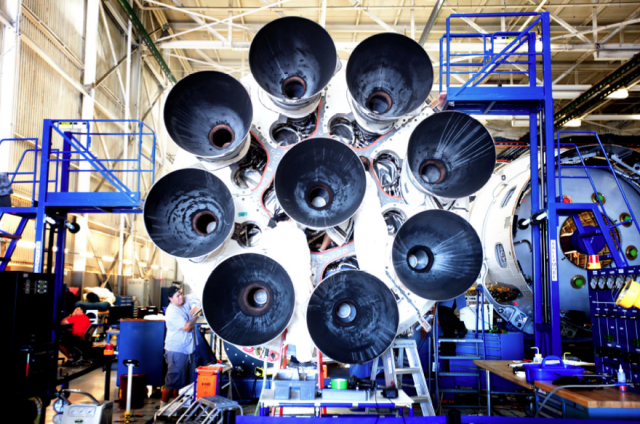 But a way it could be done would be to arrange the various engines in three dimensions down the sides of the spike: 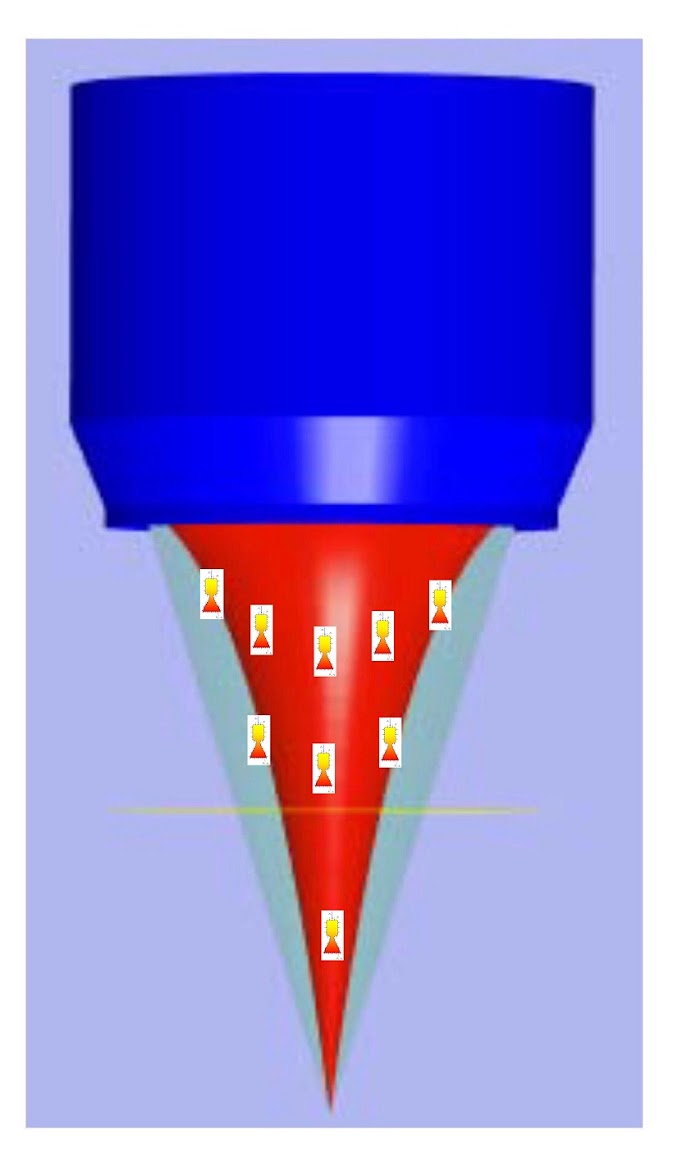 The above was for a multi-engine stage. But there is a way to emulate this for a single engine to produce a 3D level exhaust flow as for the multi-engine case. 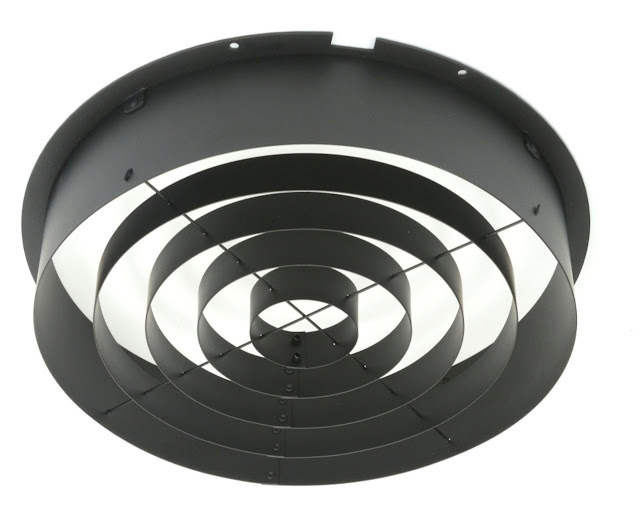 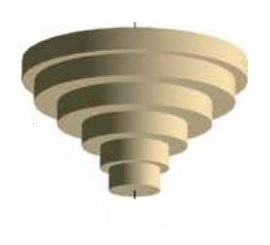 The exhaust flow would follow the exterior of an aerospike shape as before.

In the blog post Possibilities for a single launch architecture of the Artemis missions I discused that a single launch architecture is possible for the SLS rocket if there is a lightweight lunar lander. Such is possible using currently existing space stages. Firstly, a lunar crew module of ca. 2 ton mass is possible based on Orbital Sciences Cygnus capsule, discussed in Budget Moon flights: lightweight crew capsule. The Cygnus is actually build in Italy by Thales Alenia Space. As it is already built, the additional modications for added life support would be comparatively low cost.

Note Thales Alenia Space is already adding life support sysmtems to a larger version of the Cygnus for the lunar Gateway. Then a lower cost version would simply use the smaller Cygnus itself, at a ~2 ton dry mass for a short term stay on the lunar surface.

As for the propulsion system, the earlier Ariane 5 EPS storable propellant upper stage prior to the current cryogenic upper stage could be used for the purpose: it had a 1.275 ton dry mass and 9.750 ton propellant mass, for a 11 ton gross mass. Then the crew module and propulsion stage would mass 13 tons. 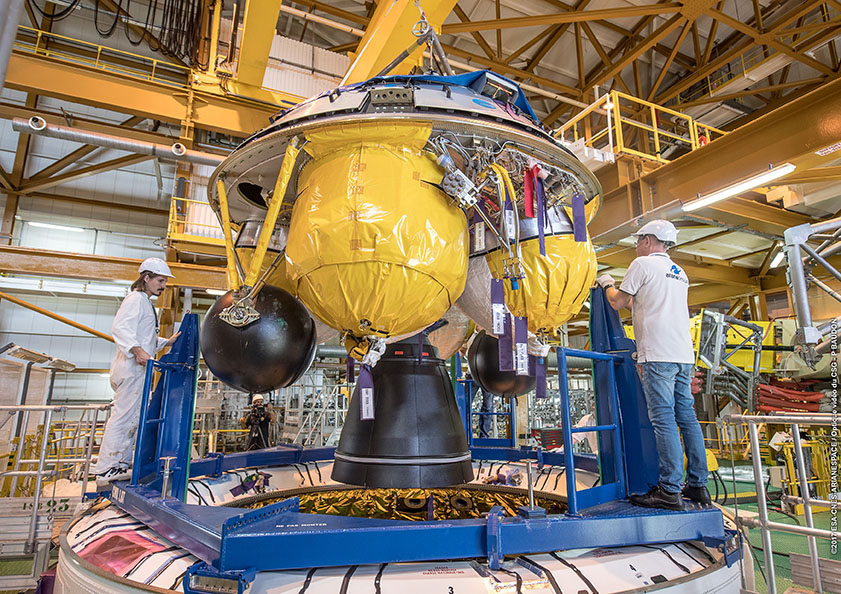 An advantage over the SpaceX Starship lunar lander plan is that it is only 3 meters high, the same height as for the Apollo lunar lander descent stage, making it easy for the astronauts to climb down to the lunar surface, compared to the 25 meter height for the Starship.

The delta-v to the lunar surface from low lunar orbit is 1,870 m/s: 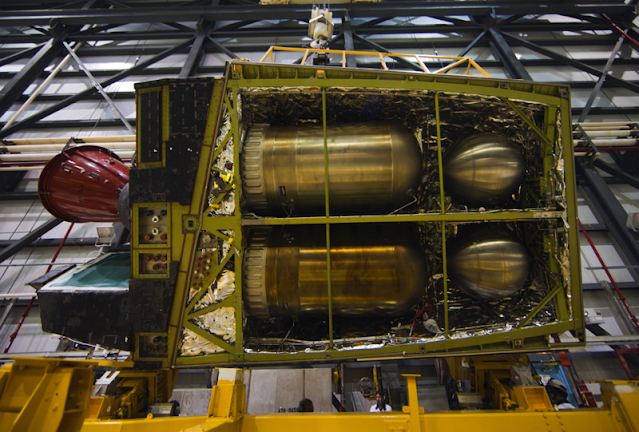 The specifications for the OMS pods are given here:
SHUTTLE PERFORMANCE ENHANCEMENTS USING AN OMS PAYLOAD BAY KIT 1991 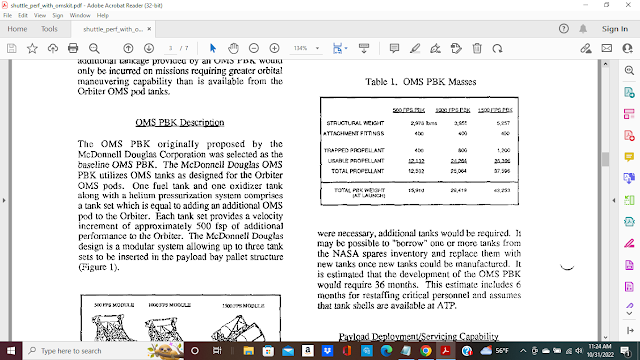 Why does the Boeing Exploration Upper Stage(EUS) cost so much?

The Boeing Exploration Upper Stage(EUS) is only about 1/10th the size of the SLS core stage. Why couldn't this upper stage be built in the same fashion as the core?

The SLS core like the shuttle External Tank before it is built by welding together barrel sections: 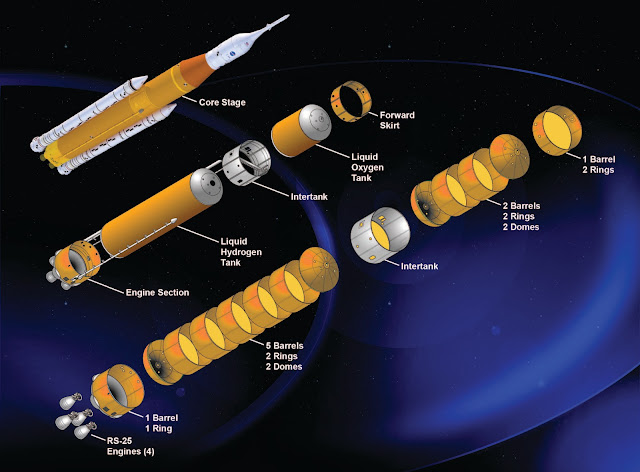 Being only ~1/10th the size of the core it likely would have fit in the same building during the construction: 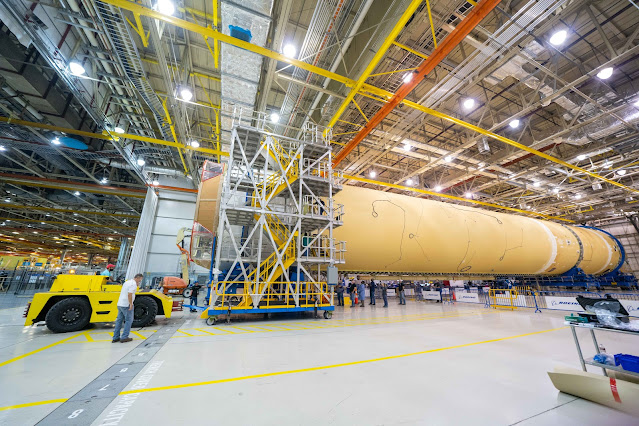 Instead of this simple approach, Boeing chose a more complicated construction that resulted in higher development costs: In fairness to Boeing it should be said that they most likely wanted to save on dry mass on the stage. Unlike for lower stages like the core, extra mass on the upper stage results in direct reduction in that mass from the payload.

However, to accomplish the same payload with a less mass efficient stage they could have just increased the stage propellant size. For instance the Delta IV first stage has a 200 ton propellant load at a 26 dry mass. You would not need the full thrust and high mass of the sea level engine the RS-68 used on the stage for this upper stage use. Smaller thrust and weight engines such as 4 RL-10's or a single J-2X would suffice.

The total development and production cost for the Boeing EUS will probably be $10 billion:

Eric Berger
@SciGuySpace
·
Oct 8, 2021
More far-out facts: The EUS will probably cost $10 billion and (it's being built by Boeing, recall) won't be completed for at a minimum of five years. Do you think a fully expendable $2.5 billion super heavy lift rocket will have any relevance at that time?

And the per stage cost likely ~$880 million each:

Note the entire SLS development was in the range of $20 billion, with an expected per lauch cost of $2 billion. Then this EUS stage at ~1/10th the size of the SLS core and without the extra expense of the SLS side boosters or current interim SLS upper stage would amount to half the cost of the entire current SLS.

While the RS-68 engine(with a vacuum optimized nozzle extension) would be over powered for the upper stage use, it would be significantly cheaper than using 4 RL-10's for example. The RL-10's are estimated to cost $25 million for a total of $100 million for 4. The RS-68 in contrast is estimated to only cost $10 to $20 million. For the J-2X engine, being an engine only developed but not yet used, there are no estimates on its cost, but it's very likely to cost much less than the $100 million for the 4 RL-10's. Another possibility might be the Vulcain engine used on the Ariane 5. It's estimated cost is only $10 million.

As an estimate on how much the stage aside from the engines might cost if built in the same fashion as the SLS core and shuttle external tank, look at the costs for the shuttle ET built by Lockheed. They were given a contract for 18 External Tanks for a total $3 billion, about $166 million per tank. Note too an SLS upper stage at ~200 ton propellant load would be less than 1/3rd the size of the External Tank. Given this much lower cost Lockheed should be asked how much would be a stage built in the same fashion as the shuttle ET at ~ 200 ton propellant load.