SLS for Return to the Moon by the 50th Anniversary of Apollo 11, page 3: lightweighting the SLS core.


In the blog post SLS for Return to the Moon by the 50th Anniversary of Apollo 11, page 2: Orion + SEV design, I made the argument that the SLS Block I, scheduled to launch in 2017, should have significantly more payload than the 70 mT cited by NASA, which is no more than that of the smaller, less powerful Block 0 SLS. Recent news reports also indicated that a Freedom Of Information Act (FOIA) request to NASA on the SLS specifications was denied:

However, I have been informed by those in the know that the Block I will indeed likely have a greater payload capacity than the 70 mT of the Block 0 version. However, a problem with providing such specifications for a new rocket is there is always weight growth beyond that which was originally expected.

I had argued that scaling up a rocket should result in increased payload. But an additional factor to consider is that the new SLS core will not be scaled up in all dimensions. It is to be kept at the same width of the shuttle external tank (ET) while its length is stretched 33%. The same diameter is maintained to use the same tooling as that used to build the ET. However, stretching the length while maintaining the same diameter means additional strengthening members have to be attached to maintain its strength against bending and buckling loads. So it's not just a straight-forward matter of scaling up the mass of the core stage to estimate the payload capacity of the Block I. So I fully believe as the SLS core stage comes closer to completion then more accurate values for the payload capacity will be released.

I was interested to note that, according to what I have been informed, that the current internal NASA estimates of the SLS payload to LEO would still allow my Orion+SEV lunar landing proposal, though not with as much leeway. Then to the end of increasing the payload and increasing the mass growth margins, I have some suggestions. Though having the propellant tanks being composite might be a bridge too far for a 2017 launch some of the structural strengthening members in the tanks might be. I was struck by this image while researching composite structures:


It shows a new carbon composite structure called an isotruss. It just looks like it would be lightweight for the strength, doesn't it?

SpaceX also uses composites to reduce weight in the interstage between the first and second stage of the Falcon 9. They could be used for the interstage for the SLS as well. An even more weight saving application of composites might be in the intertank though. This is the component of the external tank that supports the oxygen tank above the hydrogen tank. It's actually a heavy component of the ET, weighing more even than the oxygen tank.

The tank mass of the ET and other rocket stages is discussed in the report:

I consider this by the way to be the best aerospace engineering paper never published because of the importance of its conclusions. If the validity of its arguments had been recognized then, then we would already have by now routine manned space access.

On page 8 in Fig. 6 is shown a diagram giving the mass of the intertank in the ET. It's mass is listed as 5.5 tons: 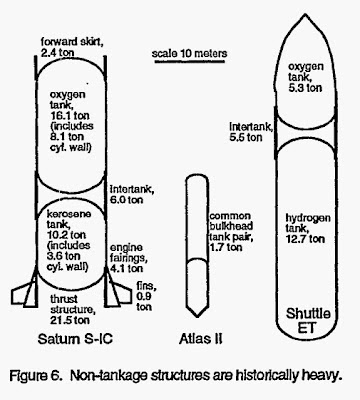 For the tank stretched 33% in the SLS this might be 7.3 tons. Estimates put the weight savings in the structural mass in the 40% range by using composites.

A greater weight saving strategy would be to eliminate the intertank entirely. This is known as common bulkhead design. It also eliminates the weight of one of the bulkheads. This was used very successfully on the Saturn V cryogenic upper stages. Currently it is used on the Centaur upper stage, the Falcon 9 first stage, and the Ariane 5 core. The plan now is to use separated tanks with an interstage to maintain commonality with the current ET design. Still it might be advantageous to do a trade study on the increased payload in comparison to the increased cost of the common bulkhead design.

Another possibility to save weight might be inflatable payload fairings. For such a large rocket, intended to carry such large payloads, the payload fairings would be quite heavy. There was a NASA RFI for innovative proposals on fairings and adapters, which has already expired. However, perhaps NASA can do a trade study of the weight saving possible under this method. Bigelow has been in the news for his inflatable habitats so this would not be so unusual for aerospace applications.

Also, I want to argue again as I did in my Orion+SEV post for funding the ULA suggestions for lightweighting the Centaurs, to the extent of getting a 20 to 1(!) mass ratio. With a propellant size of 40 metric tons(mT) this would allow a round trip lunar landing mission with a single in-space stage. In fact such a lunar lander could be reusable, and it would be so small it could even be launched with a 70 mT sized launcher.

It needs to be mentioned that many knowledgeable industry insiders do not believe the final Block II version of the SLS will ever fly. This is because of the long time frame, 20 years from now so over several presidential administrations, and because of its high cost. The SLS Block I scheduled for 2017 on the other hand very likely will.

Wouldn't it be great for the public to learn as we more closely approach the completion date for this SLS in 2017 that it already will have the capacity for lunar landing flights and moreover we already have, by then, the in-space stages to accomplish it?

NASA considering the very legitimate possibility that the Block II will not be funded should have as a contingency some plans of accomplishing the BEO explorations with the Block I SLS. This can be done with no new technology and not really very much extra cost, but just by using known methods of lightweighting the core and in-space stages.