The Commercial Space Approach to Beyond Low Earth Orbit Spaceflight.

The National Research Council has released a report on NASA's plans for human spaceflight beyond low Earth orbit (BEO). It confirmed what many observers of the space program had already realized that NASA's current approach is unfocused and uninspiring, and most importantly unlikely to succeed:

NASA could not deliver humans to Mars, says new strategy report.
Published time: June 05, 2014 02:39
Landing humans on Mars is unattainable for NASA if the space agency’s current strategy and level of funding are not modified in the near future, according to a new congressionally-mandated report.
…
Of the three pathways to Mars that NRC suggested, two were associated with a return to the moon. A lunar landing and habitat would hone technologies that could later be employed on a Mars mission, the report said.
The Obama administration has publicly expressed distaste for continued, expensive moon landings. In outlining US space policy in 2010, President Barack Obama said, “I just have to say pretty bluntly here: We’ve been there before.”
The third option outlined by the report includes the Asteroid Redirect Mission, a plan still in the study phase but currently endorsed by the Obama administration.
Such a mission would send robotic spacecraft to essentially grab and re-orbit an asteroid passing near Earth, allowing astronauts to take samples of the rock.
That mission, though, is not preferred by authors of the report. Safety issues and development of “dead end” technologies render the asteroid mission inferior if NASA wants to reach Mars, it said.
The asteroid option “cannot provide the flight frequency required to maintain competence and safety,” the report posits.
http://rt.com/usa/163736-mars-nasa-funding-strategy/


A major problem is that NASA is taking the Apollo approach to such missions, which required huge expenditures:

It’s time for NASA to abandon the Apollo mission model.
by John K. Strickland
Monday, June 23, 2014
What, then, is the opposite of the Apollo Mission model? It is the concept of a set of continuing missions designed to operate with a set of reusable space vehicles (both for crew and cargo), allowing the creation (and construction) of enduring infrastructure in specific locations in space and at surface destinations beyond low Earth orbit, using local materials, and making each subsequent mission easier, safer, and cheaper. One very critical aspect of this concept is the use of fully reusable spacecraft in an integrated cislunar transport system. Despite its name, such a cislunar system is not focused exclusively on access to the Moon, but to multiple cislunar and other inner solar system destinations. While at least one booster is about one year away from being operationally reusable, almost all spacecraft and other boosters are not, and according to some are in fact prohibited from being reused by NASA.
http://thespacereview.com/article/2537/1


The Apollo program absorbed 5% of the federal budget at the time. This is compared to the 0.5% NASA currently gets. If NASA were funded to the same extent as during the Apollo era, it would be getting in the range of $180 billion per year(!) That's not happening.

However, there is a way to get similar results without the huge payouts, and that is to follow the commercial space approach. Both SpaceX and Orbital Sciences were able to develop both launchers and capsules at 1/10th the cost of the usual fully-funded government projects. That's four separate systems able to cut 90% off the development costs. That is not just a coincidence.

Detractors of commercial space have complained the name is a misnomer for they still get federal funding. However, the name you apply to it is irrelevant. What is important is the results you get for an order of magnitude lower cost. For the commercial space approach to work though the companies involved have to be convinced they can make a profit on the projects, for it involves a public and private partnership where the companies share part of the development cost, rather than it being fully government funded.

This will be dependent though on these companies being willing and able to provide the needed funding for their part of the costs. For companies like SpaceX and Bigelow with wealthy, visionary leaders such as Elon Musk and Robert Bigelow this will likely be possible. But for the other start-up companies clearly this will depend on the size of the investment they need to make. Then a quite key fact to keep in mind is actually such missions can be accomplished at orders of magnitude lower costs than the amounts NASA estimates.

The example of a lunar lander illuminates this quite clearly. NASA has said that we can't afford to return to the Moon because a manned lunar lander would cost $10 billion to develop. But the examples of the Masten XEUS lunar lander and the NASA Morpheus lunar lander show a manned lander actually can be developed for only a few ten's of millions of dollars in development cost. And the costs that need to be borne by the companies will be even less with the cost-sharing with government space agencies.

I used the term "government space agencies" instead of NASA intentionally. The costs that needed to be borne by the companies would be reduced even further when more than one space agency contributed to the costs. For instance both NASA and ESA are contributing to the development of the Sierra Nevada Dream Chaser spacecraft. You could conceivably have all of NASA, ESA, JAXA, and Roscosmos contributing to the development cost of the BEO projects. Then the costs financed by the companies might only be 1/5th that of the already low commercial-space-approach development cost.

Let's Do Project M, Robonaut to the Moon.

Project M was conceived in the aftermath of the cancellation of the Constellation program to return us to the Moon, with no manned missions beyond low Earth orbit (BEO) in sight. It appeared that a manned return to the Moon was too expensive. Project M would send a humanoid robot to the lunar surface as inspiration for us to do such manned missions BEO:

The estimated cost was $450 million including launch cost. Part of the high cost though would be due to using the Atlas V 411 as the launcher. The SpaceX Falcon 9 v.1.1 rocket though would have comparable performance and would only cost $56 million. The lander used would be the Morpheus lunar lander. Considering the low cost of the Morpheus and the Robonaut, the cost conceivably might be in the $60 million range, certainly well less than $100 million.

The non-reusable version of the F9 v1.1, which does not need to keep a fuel reserve for return to the launch site, has an estimated payload to geosynchronous transfer orbit (GTO) of 5,745 kg. The delta-v to GTO is 2,500 m/s and the total delta-v from LEO to the lunar surface is 5,930 m/s. Then 3,430 m/s delta-v would have to be supplied by the Morpheus lander.

According the Wikipedia specifications on the Project Morpheus lander, it has a propellant mass of 2.9 metric tons (mT), a dry mass of 1.1 mT, and an engine Isp of 321 s. Then it could transport 350 kg the rest of the way to the lunar surface:

Since Project M was proposed in 2010 there has been significant advance in humanoid robot locomotion, particularly in regards to walking in the vicinity of obstacles and on uneven terrain. DARPA has conducted a competition for humanoid robots completing physical tasks humans could normally do. NASA's entry was a version of the Robonaut given legs called Valkyrie at a 125 kg mass:


However, Valkyrie did not perform particularly well during the DARPA robotic trials. It might be better to use the Robonaut torso only while using some more advanced robots for the legs such as Boston Dynamics' Atlas:


This would have an even greater inspirational effect if done by a humanoid robot.
However, Project M accomplished with the Morpheus lander would have benefits beyond just that of inspiring an interest in BEO spaceflight. Because the Morpheus lander was developed at such low cost it would give support for the idea a Morpheus-derived manned lander could also be low cost.
This has importance to those of us who think that a return to the Moon is important to accomplish in itself for man's expansion into space, but also because of the fact it can be used as a stepping-stone for further interplanetary missions to Mars or to near Earth asteroids.
And in any case the NASA plan of having a station at L2 from which to direct robotic operations on the lunar surface would still benefit from humanoid robots performing those operations and of those robots being delivered by low cost landers.

Note the delta-v to many Near Earth Asteroids (NEA's) is less than that to the surface of the Moon:


The full Moon sometimes looks huge when it's low on the horizon. I was
wondering if the same effect would occur on the Moon if we saw a full phase
Earth from the lunar surface.
There haven't been many pictures taken from the surface of the Moon that
show the Earth. Here's one: 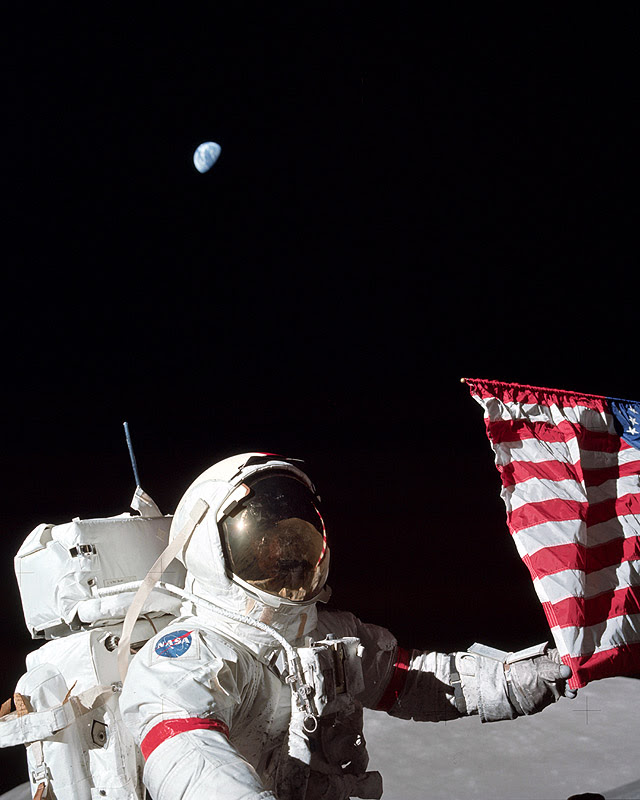 The Earth can look pretty large low on the horizon from lunar orbit even
when not at full phase as shown by this Apollo 11 image taken from orbit: 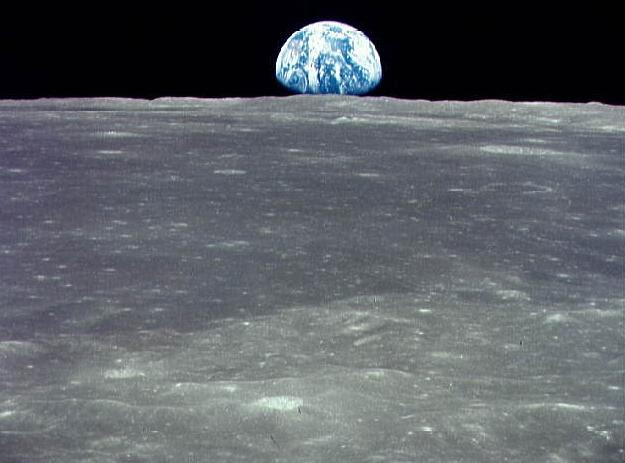 Are there images taken from the lunar surface either by robots or manned
missions that show the Earth rise at or close to full phase?

Earth Rising.
Earth as seen from the Moon is always in the same place – true or false? It
depends.
By Paul D. Spudis
May 15, 2014


Thus, there are places on the Moon from which we can stand and
contemplate the sheer beauty and magnificence of a slowly rising Earth.
Given the sea change in global perspective provided by the famous Earthrise
picture taken by the Apollo 8 crew almost fifty years ago, what societal
impacts will occur when a human being stands on the lunar surface and
watches the Earth slowly rise above the horizon?  I suspect that a similar
shift in planetary perspective will occur.  If history is any guide, such a
shift will have profound psychological and political implications  – both
positive and negative – in our reach for the stars.


I wonder if a Google Lunar X-Prize entrant could land at one of the
locations where Earthrise would be visible.

The Morpheus lunar lander as a manned lander for the Moon.


The project leader notes it could be scaled up to be a manned lander. Based on specifications of the lander I estimate it would need to be scaled up by a factor of three to form a descent stage while using the original sized version for the ascent stage. The delta-V from low lunar orbit to the lunar surface is 1,870 m/s each way: According to the given specifications, the Isp of the Morpheus engine is 321 s and the propellant load is 2.9 mT and dry mass, 1.1 mT. So with a 2 mT lunar capsule mass, the ascent stage consisting of a single Morpheus would have delta-v of:

Another nice article describes the origin of the idea of the Morpheus and its innovative, low cost approach:

Based on a $14 million development cost for two prototypes, one scaled up by a factor of three might cost $21 million. So $28 million for both stages. Actually by the Wikipedia page on Project Morpheus, the parts to build the Morpheus version 1.5B were only $750,000. So construction of a single Morpheus was probably well less than $7 million, and the cost for one three-times scaled up one well less than $21 million.

In any case we see again, just as with the Masten Xeus lander, a manned lunar lander can be made for 10′s of millions of dollars rather than the $10 billion of the Altair lunar lander.