In the post Budget Moon flights, I argued that by using a capsule half-sized to the Dragon capsule at ca. 2,000 kg dry mass, that we could launch a manned lunar landing mission carried to LEO by a single Delta IV Heavy or Ariane 5 ME, with a separate man-rated launcher to carry the capsule and crew. And if using the Falcon Heavy at the stated $1,000 per pound price point it could be done at launch costs of less than $100 million.

I'll discuss such a half-sized capsule here. This report discusses a capsule with such low dry mass:

Phoenix: A Low-Cost Commercial Approach to the Crew Exploration Vehicle


Abstract: Since the announcement of President Bush’s Vision for Space Exploration (VSE) in early 2004, the architecture of Project Constellation has been selected. The system will be centered around the Crew Exploration Vehicle (CEV), which has been dubbed by NASA administrator Michael Griffin as “Apollo on steroids”. The CEV is to be launched on a new launch vehicle, derived from existing shuttle technology. The development of this new
spacecraft and launch vehicle is a very costly proposition. An alternate approach is proposed in this study. The Phoenix is a smaller spacecraft designed specifically to be launched on the Falcon 5 vehicle under development by SpaceX. Because the SpaceX vehicle will cost only a fraction of today’s launch costs, the Phoenix is estimated to cost less than half of the price of the CEV. This reusable three person capsule utilizes an innovative re-entry concept, which allows for a cylindrical spacecraft with greater interior volume. This extremely cost-effective spacecraft is an attractive option for fulfilling VSE requirements.

Below is page 3 from this report: 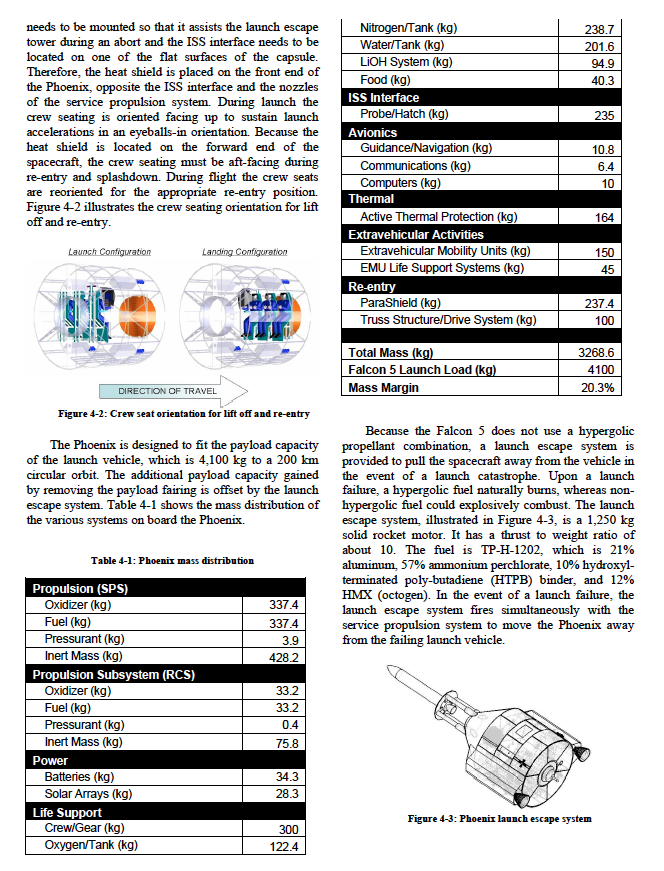 Our crew capsule would not need its own propulsion system, so get the dry mass by subtracting off the masses in the "Propulsion (SPS)" section to get 2,160 kg. We will retain the RCS system though. Note the 2,160 kg dry mass actually also includes the mass for a crew of three and the mass for their space suits, as well as the food and water for a mission to and from the Moon.
The heat shield is of the innovative "parashield" design: 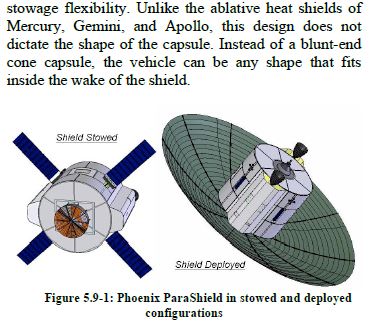 This with its truss structure/drive system would amount to about 15% of the capsules dry weight. This is about the same as Apollo era heat shields. However, the lightweight PICA-X material used on the Dragon capsule can withstand lunar return velocities and would only weigh half as much. This would subtract about 160 kg from the dry mass.

This report on a "Phoenix" capsule only envisions this crew module to carry the crew from LEO to lunar orbit and back with a separate module to be used on a lunar lander, a la the Apollo architecture. But following the Early Lunar Access architecture we could use this one single crew module for the entire flight.

It is notable that Orbital Sciences Cygnus capsule is of similar size to this "Phoenix" crew capsule. The Cygnus dry mass is 1,500 kg. This includes the propulsive service module at the base. The service module is based on Orbital's Star satellite bus. According to Astronautix this has a dry mass of about 800 kg. So the capsule itself is 700 kg. Adding on the life support elements as given in the "Phoenix" capsule report, would result in a dry mass of about 2,000 kg.
This is important because the Cygnus is built by Thales in Italy so it means Europe could make all the components for the Moon mission, including the man-rated launch rocket as described in post The Coming SSTO's: multi-Vulcain Ariane.
The "Phoenix" capsule report estimates billions of dollars in development cost. But this is using traditional NASA costing estimates. However, SpaceX has shown that development costs can be cut by a factor of 10 by private financing both for launchers and for crew capsules. From its half-size compared to the Dragon we might estimate its development as privately financed at half of the $300 million spent developing the Dragon, so to only $150 million.

For the passage above highlighted in red, I am now inclined to think that 1,500 kg dry mass does not include the mass of the service module, which is, the propulsion unit at the bottom. It's because of this page:

Cygnus standard and Cygnus enhanced use Pressurized Cargo Modules built by Thales Alenia Space, Italy. The module is based on the Multi Purpose Logistics Module that was flown on multiple Space Shuttle Missions to deliver pressurized cargo to ISS.

This page also has a separate section on the service module which suggests that mass amount above was only for the pressurized module itself.

SLS for Return to the Moon by the 50th Anniversary of Apollo 11, page 4: further on lightweighting the SLS core.

NASA has decided to revert to the original Al 2219 aluminum alloy that was first used on the shuttle external tank for the SLS core:

This is due to the greater brittleness of the lighter aluminum-lithium alloys used on the later super lightweight ET tank (SLWT). And because the later alloys were not available in the greater thickness needed for optimal lightweight performance.
However, NASA itself estimated the Al-li alloys could save 25% off the weight of a propellant tank over the Al 2219 alloy:

Still NASA estimated in regards to the SLS tank, reverting back to the Al 2219 alloy would only cost 3,000 kg in lost payload, much smaller than 25%. Apparently, the reduced thickness of the plates available for the aluminum-lithium alloys used on the SLWT results in reduced weight efficiency.
However, a new aluminum-lithium alloy Al-Li 2050 has similar strength at lightweight to the SLWT alloys and is available in thicker plate sizes:

Then we could recover the ca. 25% saving over using the Al 2219 alloy. This now is a significant increase in payload, beyond just 3,000 kg. The original ET tank using Al 2219 alloy weighed 35,000 kg. The new SLS tank is scaled up 33%, so under the same Al 2219 alloy would weigh in the range of 46,000 kg. Then the new Al-Li alloy saving 25% off this would be a saving of 11,500 kg.
NASA made an assessment of cost benefit analysis and decided on the older Al 2219 alloy. But this is Apollo era, 1960's, technology. This is going backwards not forwards in our technological development.
Further weight saving can be achieved by using composites for the intertank. NASA with Boeing is investigating large cryogenic composite tanks. This is still a research project. However the intertank is an unpressurized structure. Structures like this have been made of composites for decades.
To estimate the weight that can be saved, note the intertank in the al-li SLWT weighed 5,500 kg: 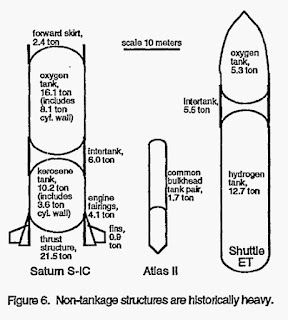 Then the intertank of the SLS of 33% larger size may be estimated to weigh 7,300 kg. A new composite material known as an isotruss saves significantly on weight:

It weighs less than 1/7th that of aluminum at the same strength. This would reduce the intertank mass to less than 1,000 kg. This would subtract off an additional 6,000 kg from the tank mass to bring it down to 28,500 kg. This is nearly 18,000 kg in total off from the original SLS tank weight, which could go to extra payload.
As I mentioned in the blog post SLS for Return to the Moon by the 50th Anniversary of Apollo 11, page 3: lightweighting the SLS core, internal NASA estimates put the actual payload of the SLS as significantly above the 70 mT mark often cited by NASA. Then an additional 18,000 kg added to this payload capability would put the SLS payload to LEO at ca. 100 mT. This is important because it would mean the SLS would have the capability to do manned lunar lander missions, not just lunar flybys.
NASA administrator Charles Bolden has said NASA, meaning the administrators, has no plans on a Moon mission, being more focused on a mission to an asteroid. However, the public in general, space advocates, industry, and even NASA's own ranks have shown no interest in the asteroid mission:

A week from Monday marks the third anniversary of President Obama’s speech at the Kennedy Space Center where he formally announced the goal of a human mission to an asteroid by 2025. While that is an official goal of NASA’s human space exploration program, there remains some opposition or, at the very least, lack of acceptance of the goal by many people, including some with NASA, as a report on NASA’s strategic direction concluded last December.
At a joint meeting of the Space Studies Board and the Aeronautics and Space Engineering Board in Washington on Thursday, the head of that study, Al Carnesale of UCLA, reiterated those concerns. “Since it was announced, there was less enthusiasm for it among the community broadly,” he said of the asteroid mission goal. “The more we learn about it, the more we hear about it, people seem less enthusiastic about it.”
Carnesale suggested that, in his opinion, it might be better to shelve the asteroid mission goal in favor of a human return to the Moon. “There’s a great deal of enthusiasm, almost everywhere, for the Moon,” he said. “I think there might be, if no one has to swallow their pride and swallow their words, and you can change the asteroid mission a little bit… it might be possible to move towards something that might be more of a consensus.”

The SLS even by its first mission in 2017 can do manned lunar landing missions by incorporating well known and relatively low cost weight saving methods to its core and upper stages.
This would go a long way towards garnering support both among the public and those in  industry to know that a return to the Moon is in the offing and in the very near term.