The option the ESA decided on for the planned Ariane 6 was the version using a solid propellant first stage:

However,  one of the other options discussed for the Ariane 6 would also allow manned European flight capability. This would be the two Vulcain core version.

CNES is evaluating these three launch vehicle concepts for a next-generation Ariane 6: two based on solid-rocket-motor technology plus an all-liquid-fueled launcher with optional solid-motor boosters. (Credit: CNES)

In the calculations for this multi-Vulcain Ariane core stage, I used this page for the specifications on the Ariane:

For the Vulcain 2 specifications, I've seen different numbers in different sources, though close to each other. I'll use this source:

I'll also use the earlier Ariane 5 "G" version that is lighter than the current "E" version to be lofted by two Vulcains without side boosters. According to the SpaceLaunchReport page it had a 170 mT gross mass for the core at a 158 mT propellant load, giving a 12 mT dry mass.
According to the Astronautix page, Vulcain 2 has a 434 s vacuum Isp and 1350 kN vacuum thrust. So two will have a 2700 kN vacuum thrust. The Vulcain's mass is listed as 1,800 kg. So adding another will bring the stage dry mass to 13,800 kg.
Now input this data into Schilling's calculator. Select again default residuals and select "No" for the "Restartable Upper Stage?" option. Select the Kourou launch site for this Ariane 5 core rocket. For the orbital inclination, I input 5.2 degrees. I gather Schilling uses this for Kourou's latitude since deviating from this decreases the payload. I chose also direct ascent for the trajectory.
Then the result I got was 7,456 kg(!) to orbit:

We should be able to remove a component on the Ariane 5 core to lighten the weight for this application. Ed Kyle on his Spacelaunchreport.com page discusses the Liberty rocket that had been planned to use a SRB first stage and an Ariane 5 core second stage. For the Liberty application, a forward skirt on the core called the JAVE ("Jupe AVant Equipée") that transmits the forces of the two solid boosters to the core would be removed. This will also be removed for our application without solid boosters.
The JAVE massed 1,700 kg. So our payload could be increased to 9,156 kg. However, Kyle also discusses on his page on the Liberty rocket that the increased thrust from the SRB first stage would require thicker walls on the Ariane core now used as an upper stage.
The thicker walls on the Ariane 5 core for the Liberty rocket are indicated in this video:


The 5-segment SRB to be used on the Liberty rocket has 12 times the thrust of the Vulcain engine. Yet as seen in the video the increased thickness to handle the increased axial load is only 50%. Then only doubling the thrust by adding a second Vulcain quite likely will require a much smaller increase in thickness. I'm informed that the 158 mT propellant mass tank has a dry weight in the range of 4,400 kg. So even increasing the thickness 50% increases the weight by ca. 2,200 kg, and the payload would still be approx. 7,000 kg.  A problem with this estimate though, aside from the unknown accuracy of the video, is that it is based on the larger Evolution "E" version of the Ariane 5 core, which might not require as much strengthening to handle the higher thrust loads as the smaller "G" version.  So we'll use a formula for calculating the thickness of a propellant tank based on the axial load as given on this lecture page: Launch Vehicle Design: Configurations and Structures. Space System Design, MAE 342, Princeton University Robert Stengel http://www.princeton.edu/~stengel/MAE342Lecture4.pdf  on page 9: 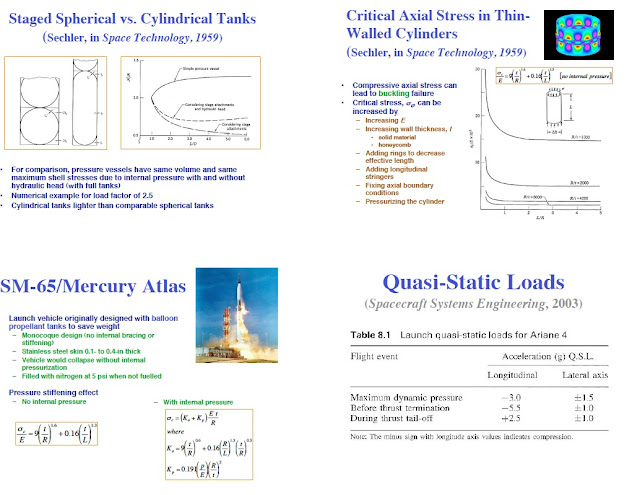 From the first formula the critical buckling load without the pressurization effect is:   σc,w/o pressure = [9(t/R)1.6 + 0.16(t/L)1.3]*E.   Multiplying out the second formula for critical buckling with the pressurization effect you see it's:   σc,w/ pressure = σc,w/o pressure + 0.191p(R/t).   Now use the formula on p. 8 that relates the tensile strength of the material to the thickness required of a pressurized tank: You see that  σhoop = p(R/t)  so that the formula above becomes:     σc,w/ pressure = σc,w/o pressure + 0.191σhoop .   Now use values for the tensile strength of aluminum alloy. The aluminum alloy used on the Ariane 5 core tanks, Al 2219, happens to get stronger at cryogenic temperatures: 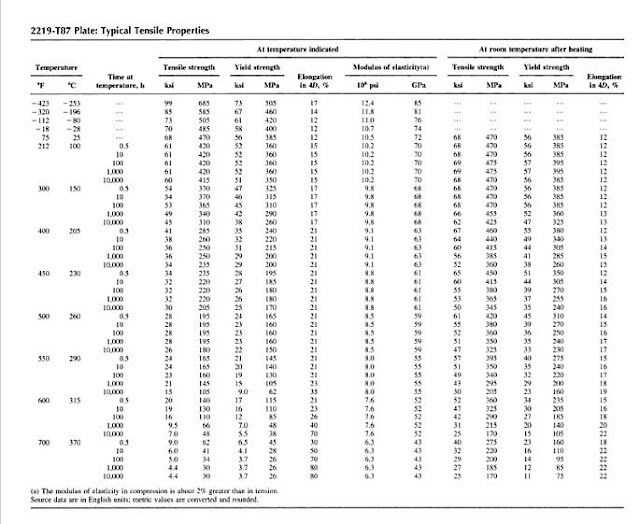 In the blog post SpaceX Dragon spacecraft for low cost trips to the Moon, I argued that manned flights to the Moon could be mounted for costs in the few hundred million dollars range. This is compared to the $100 billion cost estimated for the now defunct Constellation program.
The key to the low cost was using the SpaceX Falcon Heavy booster, and using already existing components, such as the Centaur upper stages. But I wondered could we bring the cost down even further using even smaller upper stages? Perhaps to even a few 10's of millions of dollars??
I'll use again a combination of hydrogen-fueled stages, two copies of the Ariane 4 third stage, version H-10-III this time. There are variations in the cited specifications for this stage in various sources:

It may be some sources are including the weight of the Vehicle Equipment Bay (VEB), others not. The VEB carried the avionics and telemetry equipment for the Ariane 4. We may suppose these functions carried out by the crew capsule, and at lighter weight than that used on the Ariane 4, first launched in the mid-90's.
I'll use the numbers on Braeunig's "ARIANE 4 SPECIFICATIONS" page. It gives the dry mass of the stage as 1,240 kg and the propellant mass as 11,860 kg. The HM-7B engine used on that stage has an Isp of ca. 445 s.

We'll use again this table of Earth/Moon delta-V's: 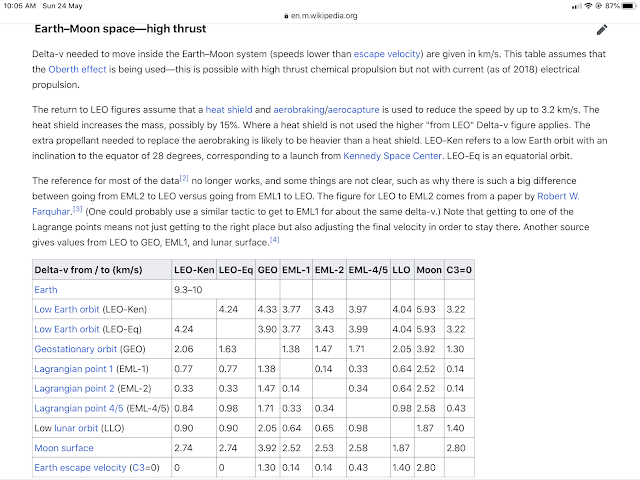 With aerobraking on the return to the Earth, the total round-trip delta-V is 8,650 m/s.  We'll  use the architecture that the landing stage is used to return all the way back to Earth, not just to link up with a stage waiting in lunar orbit. And just a single crew capsule will be used that carries the crew all the way from Earth to the Moon and back again, no separate command and lunar modules, as with Apollo. This is analogous to the Early Lunar Access proposal of the early 90's.
Then we could bring a payload of 2.4 metric tons(mT) to the Moon and back, sufficient for a half-Dragon sized capsule:

Various weight saving techniques can be used to save further weight on the stages.  The propellant tanks are made of aluminum rather than the heavier steel of the Centaurs. But they can be made lighter in the rang of 15% to 25% by using the aluminum-lithium alloy used on the later versions of the shuttle external tank (ET). Further weight saving techniques would be to use the common bulkhead and "balloon tank", i.e., pressure-stabilized, design of the Centaurs.
The tanks can be made even lighter by using composites, perhaps by 30% over aluminum-lithium: 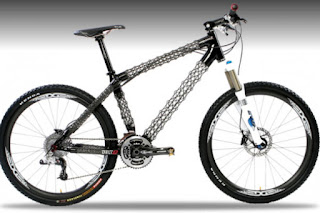 
According to the manufacturer, it weighs only 1/12th as much as steel at the same strength:

This would be sufficient for the H10-III stage. By next year they expect to have a 5.4 meter wide tank. This would allow a 20 mT standard sized Centaur to have the composite tanks. This size tank would also work for a scaled-up 40 mT Centaur-style stage. ULA has argued a stage this size following various weight saving techniques could get a 20 to 1 mass ratio. This would allow a stage that could make a manned round-trip lunar flight from LEO in a single stage.

ULA has discussed improving mass ratio as the best way to improve performance at the NewSpace 2012 conference. 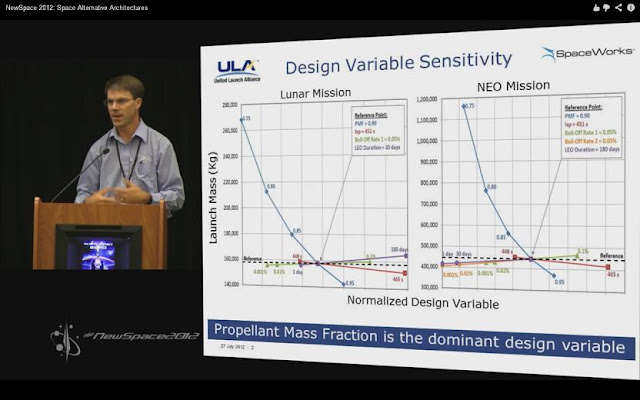 From the graphs shown it is apparent propellant mass fraction, or mass ratio, is far and away the best way of increasing performance.
Then to maximize the payload we can deliver to planetary targets, including on manned missions, it is important to implement such weight saving methods. For instance a single in-space stage for a lunar mission could be made reusable, thus cutting the cost of the in-space stage.
Conceivably just as important is that high mass ratio would also allow a single stage to orbit vehicle, SSTO. This has relevance to another ULA proposal of establishing propellant depots. It is known that a single stage capable of reaching LEO could also with orbital refueling make the round-trip from LEO to the lunar surface and back again as a single stage. So this one stage could make the entire trip from Earth to the Moon, with that one stop for refueling.
The DC-X test VTVL test vehicle will be having its 20th anniversary this year. The event is to be celebrated by the participants in the program in August this year. It will also be marked by restoration of the DC-X for display in the New Mexico Space Museum.
The DC-X itself was not intended to reach orbit. But interestingly the H-10-III stage, of similar size to the DC-X, may have this capability when lightweighted with composites. The single HM-7B engine it has though does not provide sufficient thrust for liftoff. You may need to add two to three additional engines. The increased thrust  however would add additional stress to the structure. It may require additional strengthening mass.

COST.
For the lunar flight scenario, the total weight for the two H-10-III stages and the 2.4 mT capsule would be 28.4 mT. Using the estimated $2,000 per kilo cost for the Falcon Heavy launcher this would be a launch cost of $56.8 million. There is the cost also of the H-10-III stages. According to the "Ariane H10-3" Astronautix page, it's listed as $12 million. So the total cost of the launch would be $80.8 million.
There is also however the cost of the capsule. We may suppose though the capsule is reusable so its cost per use might be only in the few million dollars range. Actually at a weight penalty of a few hundred pounds of propellant kept in reserve, which would subtract a proportionally smaller amount from the payload, the first H-100-III stage might be returnable to Earth to also be reusable. The second stage, used as the lander, could already be reusable since under the Early Lunar Access architecture it would also serve as the propulsive stage to return the capsule all the way to Earth. This would reduce the per use cost for the upper stages as well.
You would not be limited to using the Falcon Heavy, though this would be the lowest cost. The Delta IV Heavy with upgraded RS-68a engine has a 28 mT payload capacity to LEO, slightly less than the 28.4 mT needed at around a $300 million launch cost. However, the Delta IV Heavy is not expected to be man-rated anyway so you might as well launch the capsule on another rocket and link up with the propulsive stages in orbit.

ESA VERSION.
This may be an architecture that could be implemented by the ESA. The Ariane 5 ME  is to have a 20% increase in payload to GTO to 12 mT. If the increase in payload to LEO is also 20% then that would bring the payload capacity to 24 mT. This would be enough to carry the propellant of the two H-10-III stages. Neither the current Ariane 5 nor the ME version will be man-rated however. We will need a separate man-rated rocket to carry the crew to orbit. This would have to lift the two H-10-III dry masses plus the capsule mass for 2*1.24 mT + 2.4 mT = 4.88 mT. I'll show in an accompanying blog post this is well within the capability of a vehicle made from a just a single stage of the Ariane 5 core with a second Vulcain 2 engine added.
The cost of the Ariane 5 is about $200 million. If the cost is also increased by 20% on the ME this would bring it to $240 million. And the cost for the manned launcher? I'm informed by a member of ESA that the estimated cost for a modified Ariane 5 core with a second Vulcain 2 engine would be ca. $60 milion. Plus the $24 million cost of the two upper stages brings the cost to $324 million.