In the blog post "Golden Spike" Circumlunar Flights, I suggested that the Falcon 9 1.1/Dragon could do a circumlunar mission with a half-sized Centaur, of ca. 10 mT propellant load, to do the translunar injection.
Interestingly it might be possible to do without even needing the extra in-space stage. Elon Musk has said through his Twitter account that the 13 mT payload capability was actually a reduction of the F9 V1.1's true capability due to reusability considerations. Gwynne Shotwell confirmed this on a TheSpaceShow interview on Friday, Mar. 21 at about the 9 minute mark. She said the quoted payload on their web site for the F9 v1.1 is about 30% less than that of a one-use version.
This would put the expendable version in the range of the 16.6 metric tons to LEO given on NASA's site:

The point is this would be just about at the payload capability to do translunar with the Dragon using just its onboard Draco, or upgraded SuperDraco, thrusters. On the "NASA Launch Services Program" site, click the link for the Performance Query Tool and select the Falcon 9 and "elliptical" orbit option. Enter in 36000 km for the altitude corresponding to geosynchronous transfer orbit (GTO) and 28.5 degrees for the orbital inclination corresponding to launch from Cape Canaveral. Then the calculator gives the payload to GTO as 5745 kg. 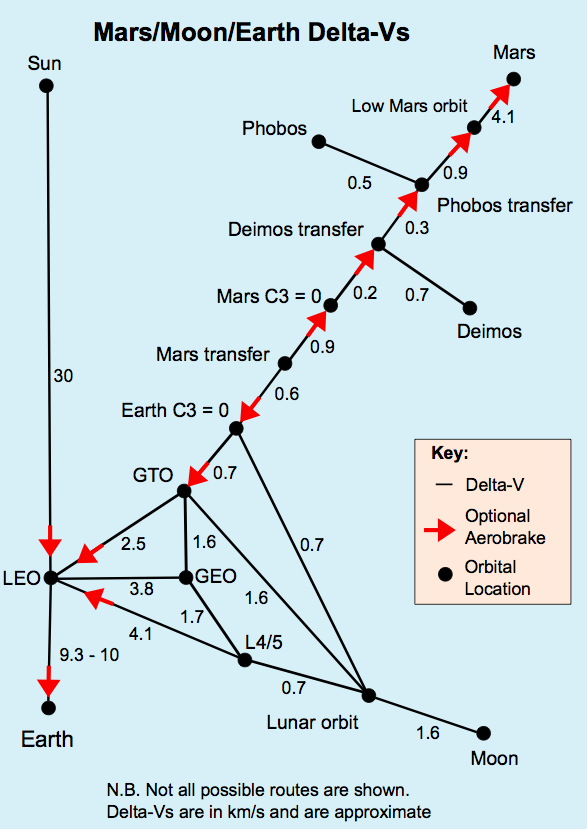 Then translunar injection (TLI) at 3,100 m/s would only require an additional 600 m/s delta-v. The Dragon has a dry mass of 4,200 kg and a propellant mass of 1,290 kg. SpaceX has not released the Isp of the hypergolic thrusters on the Dragon, but they typically are in the 320 s range in vacuum. Then it could carry 1,800 kg payload to the 600 m/s needed to reach TLI:

Actually that 1,800 kg payload would put the total mass beyond the 5745 kg capacity to GTO. Smaller payload say in the 250 kg range would be doable.
Such missions would be important to do since at a perhaps $120 million total launch price for the Falcon and Dragon it would show lunar missions are possible without requiring huge launchers such as the Saturn V, Ares V or SLS.

On TheSpaceport.us forum, DocM informed me via PM that in an environmental impact statement SpaceX gave the propellant load for the Dragon as 1,388 kg. This would raise the max payload to reach 600 m/s delta-v to 2300 kg. Again though this would put the total mass outside the range that could be lofted to GTO. Likely you would still have to limit the payload to ca. 250 kg or so.

The primary criticism is that it would require unrealistically lightweight nuclear propulsion. However, Zubrin doesn't even like the idea of fast propulsion to allow short travel times to Mars. He argues in favor of using 6 month or more one-way travel times to allow free return trajectories at Mars. But the health disadvantages of long travel times such as radiation exposure, bone and muscle loss, and the recently found eye damage and vision loss suggest we should investigate such short travel times.

Now we find there is also another reason: mechanical breakdowns on such missions of 2 or more years round trip length, such as found with the coolant system on the ISS.

Note that the argument about free return trajectories does not hold with respect to planets with atmospheres. The Apollo missions did do a free return around the Moon, but there was no non-propulsive method to slow down at the Moon. On return to the Earth though, even Apollo had a trajectory that would send it off into space if the angle was too shallow or plunging too steeply into the Earth's atmosphere to burn up if the angle was too steep. The same could be used in addition to the propulsive method whose high efficiency would also allow it to be used for slow down at Mars.

So it is important to note we may have a short term power source instead of nuclear power, for plasma propulsion such as Vasimr at the needed lightweight.

A disadvantage is this increases the loss due to heat and also if the light is too intense it can overload the solar cells so they don't work at all. However a recent report claims they can use concentrated light at thousands of times higher than solar insolation:

This work is important because photovoltaic energy companies are interested in using lenses to concentrate solar energy, from one sun (no lens) to 4,000 suns or more. But if the solar energy is significantly intensified – to 700 suns or more – the connecting junctions used in existing stacked cells begin losing voltage. And the more intense the solar energy, the more voltage those junctions lose – thereby reducing the conversion efficiency.

Several reports in fact claim solar concentration at hundreds to thousands of Suns:

FEBRUARY 17, 2011
Concentrated solar power at half the cost of thin film solar.
http://nextbigfuture.com/2011/02/concentrated-solar-power-at-half-cost.html

This will be dependent on having lightweight mirrors or lenses. However another key fact is that the parabolic mirrors do not have to be telescope grade accuracy. Indeed you can find on the net videos of amateurs making their own homemade solar furnaces that also require light to be concentrated to high intensity. These homemade mirrors can be as simple as aluminum foil spread onto a cardboard frame and still concentrate light to generate thousands of degrees. Not requiring high accuracy for the mirrors suggest they can be made lightweight.

Another example of how lightweight we could make the mirrors is actually to be tested in space:

This solar sail has 25 square meters at only 2 kg weight. Let's suppose we only need 10 times solar concentration. This should already be within the capacity of currently used solar cells to accommodate since recent research is in the 100's to 1,000's of Suns range.
At 10 times solar concentration this means the solar cells have 2.5 square meters area in order for the mirror reflecting area to be 10 times greater. If they were 100% efficient this would be 2500 watts of power under standard solar illumination, i.e., without concentration. Solar cells though typically are only in the range of 30% efficient. So they would give 750 watts under standard solar illumination. At a 200 watts per kg power density now reached for space solar cells they would weigh 3.75 kg.
Now we are assuming the sail concentrates 10 times greater surface area onto the cells, so under this concentrated illumination they will put out 7,500 watts. The total weight of the cells and sail would be 5.75 kg. And the power to weight efficiency would be 1,300 watts per kg, sufficient for the Vasimr.

The question though is would extra mass be needed to dispense the extra heat. Low power concentrators don't need these cooling systems:


Low concentration PV are systems with a solar concentration of 2-100 suns.[5] For economic reasons, conventional or modified silicon solar cells are typically used, and, at these concentrations, the heat flux is low enough that the cells do not need to be actively cooled. The laws of optics dictate that a solar collector with a low concentration ratio can have a high acceptance angle and thus in some instances does not require active solar tracking.

We only need about about 5 times concentration with currently available space solar cells without significant loss of efficiency from the solar cells to get the needed specific power.

These methods would concentrate sunlight onto solar cells. However, solar cells are typically low efficiency, in the range of 30%. Another advantage of concentrators is that increase the efficiency. The latest ones can get 44.7% efficiency and researchers believe they can reach above 50%.

Another method would eliminate the need for solar cells. That is to use a solar furnace. These can get temperatures as hot as the surface of the Sun by concentrating sunlight. By thermodynamics very high temperatures correspond to high efficiency conversion of heat to other forms of energy, 90% and above.

An additional problem with plasma thrusters though is the high weight compared to the thrust they put out. For VASIMR the thrust to weight ratio can be calculated to be in the range of only 1 to 4,000. See for example this report for the mass of the thruster per given power on p. 2  and the thrust per power on p. 3:

Other plasma thrusters however, such as the Hall effect thruster have better thrust weight ratios, ca. 1 to 200. A recent advance may even improve on that. This report discusses "nested channel" Hall effect thrusters, which have been shown to achieve the same thrust at a lower weight: 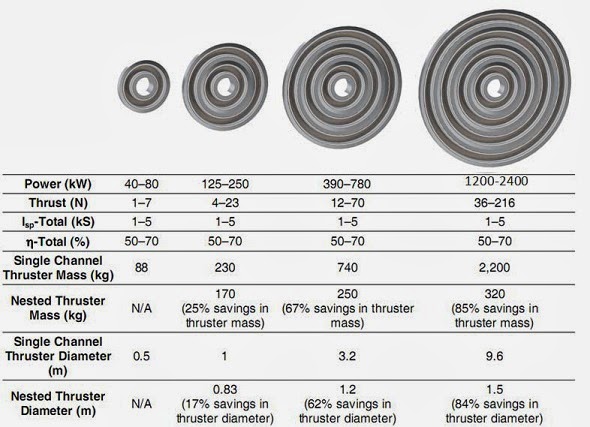 The three-channel thruster in this table only weighs 320 kg. There is an inverse relationship between Isp and thrust as shown in the graph in Fig. 3 of this report on p. 3. So for the high of 5,000 s Isp in this table, the thrust would be 36 N. Still this is a 1 to 90 thrust to weight ratio, quite good for plasma propulsion. In comparison, at a 1 to 4,000 thrust to weight ratio, the VASIMR thruster would weigh nearly 15,000 kg.

In addition to the thruster though plasma propulsion systems need a power procession unit (PPU). This transforms the low voltage put out by solar cells, usually just a few volts, to the hundreds of volts needed for plasma propulsion. The PPU mass is often comparable to that of the thruster itself.

However, there may be methods to reduce or eliminate this extra mass. One method might be to put the solar cells in series like with batteries to build up the voltage. There is the question though if the solar cells can handle this higher voltage. Another possibility might be to use the recent advances in nanotechnology to produce a lightweight PPU. For instance quantum dots can transform low frequency light to high frequency light. It might possible to adapt this method to transform low voltage to high voltage.

An exciting upcoming development is the Sunjammer solar sail scheduled for launch in January, 2015: 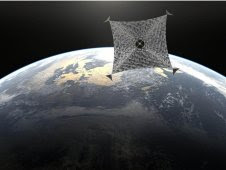 This sail will have an area of 1,200 sq. m. at only a 50 kg weight. At perihelion, the solar irradiance is about 1,400 watts per square meter. This would give a maximum possible power of close to 1.7 megawatts at 100% efficiency. If using the new 44.7% efficiency solar concentrator cells, this would be 750 kwatts.

Then as early as next year we can test high power plasma propulsion systems that can make manned missions to Mars at travels times of weeks rather than months.

The use of solar concentrators to reduce the mass of solar power systems would have applications also to space solar power. Then it is notable that a recent development in carbon nanotubes may make the required mirrors 1,000 times lighter than even the Sunjammer solar sail: