Copyright 2015 Robert Clark
NASA has proposed funding for a future orbital mission to Europa. This is expected to have a billion dollar cost. A NASA-funded lander mission to Europa was expected to be too expensive. University of Arizona researcher Christopher Impey suggests doing privately funded missions to Europa:

Indeed, by following the commercial space approach an actual lander mission, not just orbital, can be mounted for costs in the range of one of NASA's lowest cost Discovery-class missions.

Some observations by the Hubble telescope were that Europa may have plumes like Enceladus though those observations have not been confirmed. If it does, then it may be the subice ocean on Europa could be reached simply by traveling though the fissures, like on Enceladus, not requiring melting through the ice.

For getting funding for a privately-financed mission, imagine how much interest there would be among the public if we could actually access this subsurface ocean. As a point of comparison the Mars Pathfinder missions web site caused such overloads, with 40+ million hits per day, that some mirror sites crashed or had to have access limited:

Traffic on Mars
by Chuck Toporek
Asst. Managing Editor
Web Review
However, the most interesting and little known fact about the amount of traffic to the mirror sites comes from France, where the government actually pleaded with computer users to stop accessing the two Mars Pathfinder mirrors. You see, the phone systems in France carry all of the Internet traffic in the country, so when people started visiting the mirror sites at VisuaNet and Le Centre National D'Etudes Spatiales (CNES), they tied up the phone lines and basically disabled the country.
http://mars.jpl.nasa.gov/MPF/press/webreview/index4.html

Private companies that provided funding could be allowed to advertise on the mission web site.

Mission Delta-V requirements.
The spacecraft first has to be sent on a trajectory towards Jupiter. This requires a delta-v of 6.3 km/s. Following a Hohmann trajectory it takes about 2.7 years to arrive at Jupiter. Aside from this Jupiter transfer delta-v, it will need to be placed into Jupiter/Europa orbit on arrival, and then sent towards a landing on Europa. According to this report this will require a delta-v in the range of 3.9 km/s:
European Cryo-Ocean Exploration Submersible (ECOES).
Preliminary Design Report. 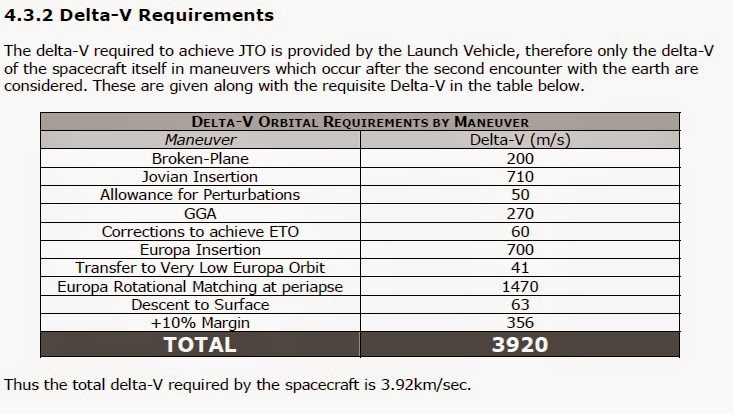 http://www.lpl.arizona.edu/~jmoores/ECOES.pdf
We'll use a cryogenic, hydrogen-fueled stage for the injection into a trajectory towards Jupiter. And because of the long travel time, we'll use storable (hypergolic) propellants for the propulsive maneuvers at Jupiter.
Falcon 9 v.1.1 sized launcher.
The expendable version of the Falcon 9 v1.1 has a payload to LEO of ca. 16.6 metric tons (mT). We'll use the Ariane H10-3 hydrogen-fueled upper stage for the Jupiter trajectory insertion. It has a 11.86 mT propellant mass, 1.24 mT dry mass, and 445 s Isp. Then it can carry 2.4 mT to the 6.3 km/s delta-v needed for the flight towards Jupiter:
445*9.81ln(1 + 11.86/(1.24 + 2.4)) = 6,324 m/s
For the stage, at Jupiter we'll use the Integrated Apogee Boost Subsystem (IABS) stage. 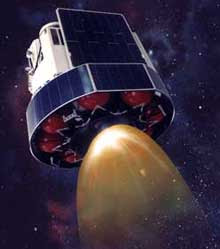 An artist's concept of a DSCS satellite being boosted by the IABS. Photo: U.S. Air Force


This is a small kick-stage used to put geosynchronous satellites in their final orbits. It has a 1,578 kg gross mass and 275 kg dry mass, for a 1,303 kg propellant mass, and a 312 s Isp. Then this could provide a 220 kg spacecraft with the 3.92 km/s delta-v needed to land on Europa:
312*9.81ln(1 + 1303/(275 + 220)) = 3,947 m/s.
The Falcon 9 v.1.1 costs in the range of $56 million, the Ariane H10-3 cryogenic stage costs in the range of $12 million and the IABS stage costs in the range of $15 million, for a ca. $83 million launch cost.
For a model of a low cost lander we might use the Mars Pathfinder mission. This weighed only 264 kg for the lander plus 10.5 kg for the rover. The development cost for the lander was less than $150 million. The development cost of  $150 million is quite low for a planetary mission. However,  privately financed it would be even less than that, perhaps as much as a factor of 10 cheaper.
SpaceX was able to develop the Falcon 9 at a 90% (!) saving off  the development cost of a fully government-financed launcher of similar size. Planetary Resources Inc. plans to produce imaging satellites at a fraction of the usual cost. 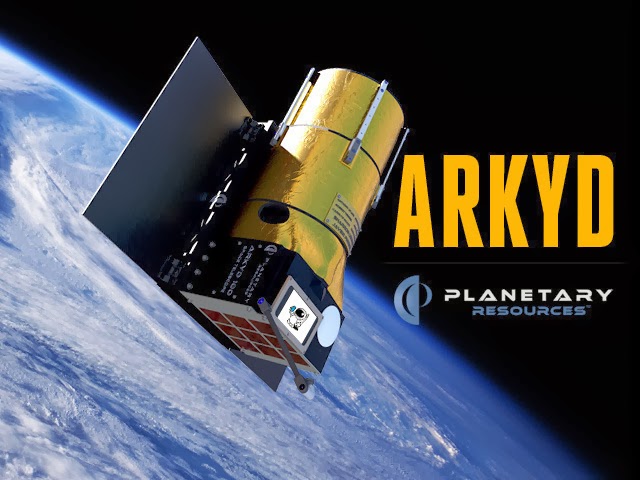 Arkyd 100 space telescope.
With mission costs this low we might want to produce a separate orbiter mission at Europa. As models for this we might use the small Mars orbiters Mars Odyssey and Mars Climate Orbiter.

Falcon Heavy sized launcher.
﻿
The Falcon Heavy will allow a larger payload to be transported to the Europan surface. It is expected to be able to carry 53 metric tons to LEO. We'll use two Centaur stages together for the injection into a trajectory towards Jupiter. For the maneuvers at Jupiter, we'll use the storable propellant stage Delta K. This has a 6 mT propellant load, 0.95 mT dry mass, and 319 s Isp. Then it can provide a 1 mT spacecraft with the 3.9 km/s delta-v needed for the Europa landing:
319*9.81ln(1 + 6/(0.95 + 1)) = 4,397 m/s.
The Centaur has several incarnations. It's propellant load is in the range of 20 mT, dry mass ca. 2 mT, and Isp ca. 451 s. Then two Centaurs together could provide the 6.3 km/s delta-v needed for the Jupiter flight carrying the 7.95 mT total mass of the Delta K stage + Europa lander:
451*9.81ln(1 + 40/(4 + 7.95)) = 6,500 m/s.
The Falcon Heavy will cost in the range of $125 million. The Centaurs cost in the range of $30 million each and the Delta K stage costs ca. $4.35 million. Then the total launch cost will be in the range of $189.35 million.
As a model of a 1 metric ton lander we might use the Mars Curiosity rover. This is a $1 billion mission however. The commercial space approach however should be able to produce a similar size spacecraft for a fraction of this cost.
Bob Clark
﻿

The web traffic to the NASA web site for the Mars Exploration Rovers was even more extraordinary, measuring in the billions of hits:

NASA’s Web Site for 2005
By Digital Trends Staff — January 7, 2005
The U.S. National Aeronautics and Space Administration Web portal continues to drive high traffic numbers — more than 17 billion hits in 2004, report both NASA and Speedera Networks, a leading global provider of on-demand distributed application hosting and content delivery services. Speedera delivers content from the space agency’s portal to visitors seeking access to the site from around the world. Popular events on the NASA Web site, including the ongoing Mars Exploration Rover mission entering its remarkable second year, as well as upcoming major projects such as the launch and comet encounter of NASA’s Deep Impact satellite mission in 2005, are expected to drive continued high levels of traffic, according to NASA officials.
http://www.digitaltrends.com/computing/nasas-web-site-for-2005/

It was estimated there were 142 million visits to the site during this period. So the question is how much advertising could be sold for a site this well visited?
Posted by Robert Clark at 6:45 PM 3 comments:

Ariane 5 Core plus 4 Ariane 4 side-boosters as a manned launcher.

In the blog post "Ariane 4 for European manned spaceflight", I suggested resurrecting the Ariane 4 to produce a European manned launcher. In the blog post "A half-size Ariane for manned spaceflight", I suggested using a half-size Ariane 5, so as to be loftable by a single Vulcain 2, to serve as a manned launcher.

Here, I'll suggest using a full Ariane 5 core but using 4 Ariane 4 liquid side boosters for a manned launcher. I'll use the smaller Ariane 5 "G" version to be loftable by the boosters and the single Vulcain 2 engine. By the Spacelaunchreport.page on the Ariane 5G, the core has a 12 metric ton (mT) dry mass and a 158 mT propellant mass. By the Astronautix page on the Vulcain 2 used on the core, it had a 1,350 kN vacuum thrust and 434 s vacuum Isp.

For the liquid-side boosters from the Ariane 4, they had a 4,493 kg dry mass and 39,279 kg propellant mass. The Viking 5C engine used had a 752 kN vacuum thrust and a 278 s vacuum Isp. Plugging these numbers into Dr. John Schilling's Launch Performance Calculator gives the results:


"Payload" refers to complete payload system weight, including any necessary payload attachment fittings or multiple payload adapters
This is an estimate based on the best publicly-available engineering and performance data, and should not be used for detailed mission planning. Operational constraints may reduce performance or preclude this mission.

The 15.5 mT payload is surprisingly high. Note this is without even using an upper stage.

Also, at a 15,500 kg payload capacity this Ariane 5 core plus Ariane 4 side-booster launcher could loft the Sierra Nevada Dream Chaser, at 11,300 kg. 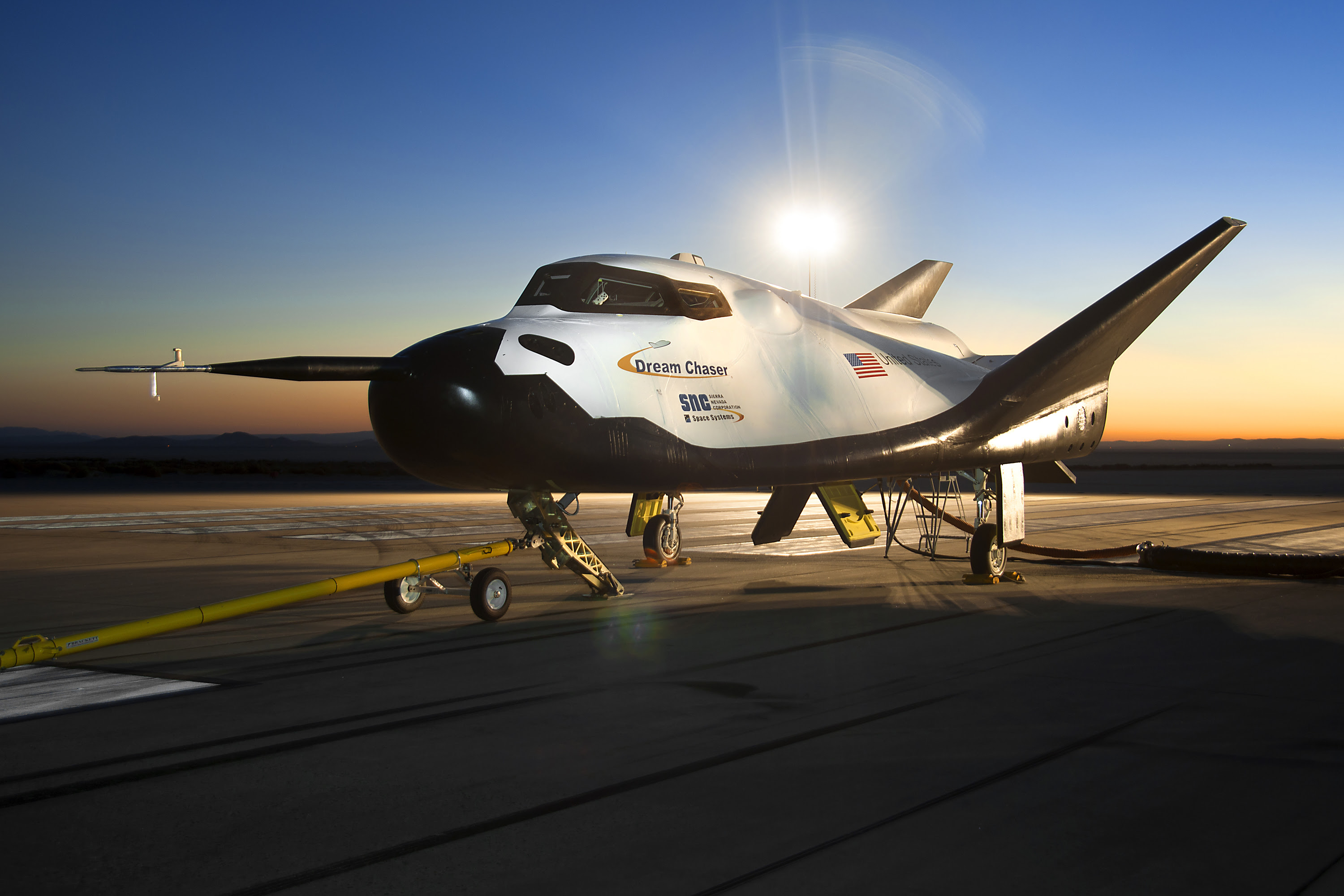 European companies are researching with Sierra Nevada the possibility of using the Dream Chaser as a manned spacecraft.
Posted by Robert Clark at 12:03 PM No comments: