Then I'll propose an alternative solution to achieving the long-distance water flow. In the high volume, high head "mud pumps" discussed in the Page 2 blog post, the pumps necessarily had to have both high volume and high head because in their dredging, mining, drilling use they have to pump both mud and rocks in addition to just water.

The problem with sending water streams long distance is that the water streams will disperse into droplets due to air drag under the high speeds or pressures needed to send them the long distances. However, rocks certainly can be sent such long distances even acting under air drag. So the idea would be to have the water contained as some percentage within mud or rock. Depending on the relative proportion of the mud/rock to the water, the individual packets would be sufficiently cohesive to be sent the required distance.

Another possibility would be to send the water as frozen blocks or balls. There would be the question then of how to get the water rapidly frozen while being sent out at high pressure or speed. One possibility would be to first use snow making machines that can make snow using up to 107 gallons per minute of water. The water is sent out in the form of a fine mist so that it will rapidly freeze. You would also need a compartment of refrigerated air kept below freezing so that the water will rapidly freeze like in the Winter conditions on a ski slope: The snow is made in the form of small ice crystals though. The snow/ice would then have to be compressed into balls or cubes so it would have longer range when then sent to the high pressure pumps.

Still another possibility is the water could be encased in a biodegradable plastic bag or shell before being sent to the high pressure pumps.

To minimize drag we might want to put the encased or frozen water into a tear drop shape. We might also want to give it fins and use spin stabilization for a straight-line flight kilometers long.

A gliding approach to long range.
To get even longer range, we could also shape the mud packs, ice packets, or plastic shells into aerodynamic lifting surfaces. Gliders for example can have lift/drag ratios in the range of 40 to 60.

The glide ratio which is the ratio of the horizontal length traveled divided by the vertical drop is equal to the lift/drag ratio.

So in the originally proposed scenario in this series of blog posts of using a high volume fireboat such as the Warner Lawrence, we could first send the high volume of 38,000 gallons per minute to 400 feet. 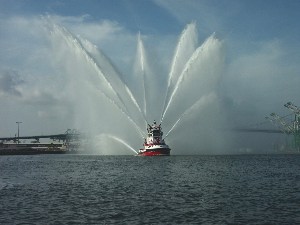 Then encasing the water into a gliding aerodynamic shape with a ca. 60 to 1 lift drag ratio, we could cover 24,000 feet horizontally as it fell 400 feet.

This would have the advantage in that you would not need to convert this high volume pumping capacity into lower volume, but higher head.

The disadvantage is the high lift/drag ratio shape of a sailplane would be highly subjected to winds. 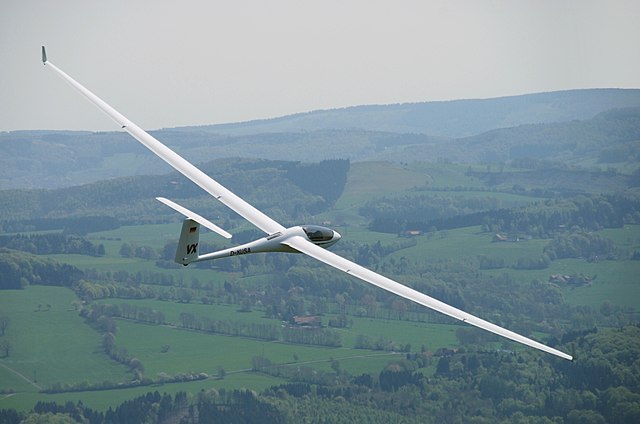 
So we likely would need some method of automated control surface maneuvering to ensure straight and true flight. One possibility might be the rolleron fins used on rockets:

A rolleron is a type of aileron used for rockets, placed at the trailing end of each fin, and used for passive stabilization against rotation.[1] Inherent to the rolleron is a metal wheel with notches along the circumference. On one side, the notches protrude into the airflow. During flight, this will spin the wheels up to a substantial speed. The wheels then act as gyroscopes. Any tendency of the rocket to rotate around its major axis will be counteracted by the rollerons: the gyroscopic precession acts to move the rolleron in the opposite direction to the rotation.[2]
https://en.wikipedia.org/wiki/Rolleron

Bob Clark
Posted by Robert Clark at 1:48 PM No comments:

In the blog post Pumping pressurized fluids to high altitude for the space tower and for fighting forest fires, Page 2: high volume, high head, single pump solution, I speculated that we might be able to send water streams long distances, kilometers long, without piping by using laminar flow. As shown in the videos, on that page laminar flows displays surprising cohesiveness in the water streams, and extends the distances possibile over standard streams.

Studies on the flow distance of non-laminar water streams show their distance is dependent on where the break-up distance occurs, [1]. This is known to be dependent of turbulence within the piping. Laminar flow achieves longer distance because of reduced turbulence. Then the natural question to ask is how much we can reduce turbulence.

Gas flow through tiny atomically flat walls: Atomic-scale ping-pong.
Date: June 20, 2018
Source: University of Manchester
Published in Nature, this new research shows that the channels allow gas through them at rates that are orders of magnitude faster than expected from theory. This will not only be important for fundamental studies on molecular flows at nanoscale but also for applications such as desalination and filtration.
The reported anomalously-high flow is due to a phenomenon called 'specular surface scattering', which allows a gas to pass through the channel as if it were not there at all.
https://www.sciencedaily.com/releases/2018/06/180620150200.htm

Note this would be important not just for inducing low turbulence and laminar flow for a pipe-free approach but also for the approach using piping to reduce drag and pressure loss.

Actually, there are two effects involved in this report that need to be investigated separately. One, is that the surface is atomically flat, the other is that the channels are at nanoscopic widths.

The flatness at atomic scales would likely reduce drag and turbulence for macroscale pipes, and therefore also improve the laminar flow effect on exiting the pipe.

But an aspect of how laminar flow streams are produced suggests the nanoscale piping in itself would also improve laminar flow. In the case of laminar flows in amateur experimenters, they were produced by using multiple small straws placed within the pipe to produce multiple small streams. The experimenters noted the effect is much better for small straws as for example coffee stirrers compared to larger straws as used for example sodas. Then the natural question that needs to be investigated is how much better would the effect be for microscale and nanoscale piping.

In extending the results of the published report on helium gases to water another effect needs to be taken into account, the stickiness of water on surfaces. Materials low in this measure are called hydrophobic. Recent research has been on materials extremely low on this measure called superhydrophobic. In this case simulations and experiments show the drag can be reduced 50%, [2].

REFERENCES.
1.)Theoretical Range and Trajectory of a Water Jet.
http://trettel.org/pubs/2015/Trettel-2015-Theoretical-range-and-trajectory-of-a-water-jet.pdf

Posted by Robert Clark at 9:36 AM No comments: