A crewed version of the Cygnus capsule probably could be produced to mass in the range of 2,000 kg dry mass:

In regards to the question of the suitability of the Ariane 4 for manned missions, i.e., whether it could be man-rated, note that it was considered for the purpose in the 1980's:


British manned spacecraft. Study 1987. Britain was the only European Space Agency member opposed to ESA's ambitious man-in-space plan, and the British conservative government refused to approve the November 1987 plan.
However, the British aerospace industry did propose some interesting alternatives, such as the $2-billion 'Multi-Role Recovery Capsule'.
British Aerospace Ltd. (BAe) regarded the French Hermes mini-Shuttle as too expensive and complicated. Instead, they felt a simple crew capsule would make more sense as an 8-man 'lifeboat' for Space Station Freedom (NASA issued a competitive request for proposals in late 1987). MRC was to be launched on the existing Ariane-40 rocket and the capsule could be flown manned or unmanned, for sensitive microgravity experiments in orbit.

Posted by Robert Clark at 11:58 AM No comments:

I have become enamored of NASA's Morpheus lunar lander project. In the post "NASA Technology Transfer for manned BEO spaceflight", I discussed how it can be used to produce a manned lunar lander, or asteroidal lander, for a few 10's of millions of dollars, far less than the $10 billion estimated to be needed by NASA. And in "NASA Technology Transfer for Orbital Launchers", I discussed how its engines could be used for the small orbital launch system Firefly, resulting in a significant reduction in the launcher's development costs. 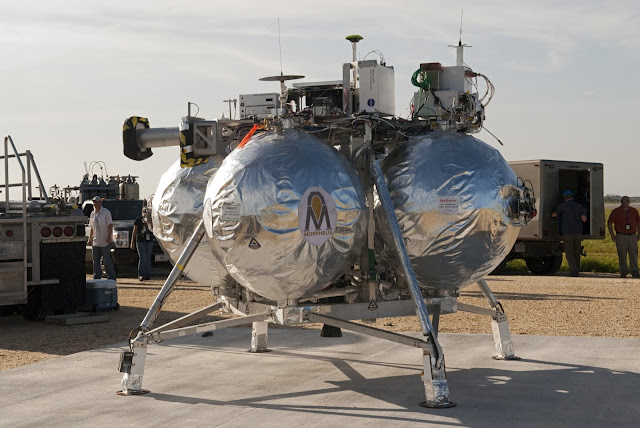 Note this means when fully fueled the single engine could not lift the vehicle in Earth's gravity. The single engine of course would be fine for its intended purpose as a lunar lander at 1/6th gravity. However, for a Earth launch system we'll use a half-size vehicle to be launchable with a single engine. Rounding off this gives it a propellant mass of 1.5 mT and dry mass of .5 mT. Compared to the full Morpheus this will have only two spherical propellant tanks instead of four, one each for the liquid methane and LOX.

Since this will be reaching high velocity through Earth's atmosphere it will have to be streamlined. Then we'll place the two propellant tanks inline vertically. We'll also need an aeroshell. To save weight we could make the aeroshell composite. Another possibility would be to make the aeroshell inflatable. Since the aeroshell would not need to be load-bearing and with the possibility to make it inflatable we'll assume it adds only a small proportion to the weight. We could save additionally weight by making the tanks out of aluminum-lithium alloy, titanium, or composites. Alternatively, we could use a cylindrical tank to hold the propellants to eliminate the need for an aeroshell.

This page gives the required delta-v for a suborbital flight as in the range of ca. 2,400 m/s:

There are commercial opportunities for suborbital flight with NASA. Also using two to four copies or scaled up that many times this could also be used for a suborbital tourism vehicle.

DARPA is funding research into a small air-launched system called ALASA, As described in the blog post "Dave Masten's DARPA Spaceplane, page 2: an Air Launched System", high altitude supersonic air-launch at Mach 2 can cut 1,600 m/s from the delta-v needed for low Earth orbit. This would reduce the delta-v that needed to be supplied by the rocket from 9,100 m/s to 7,500 m/s.

We'll use two copies of the half-size Morpheus firing in parallel and cross-feed fueling. Cross-feed fueling allows the upper stage to have its full level of fuel after staging, unlike the usual case with parallel staging. As in the earlier blog post, we'll again use the Star 17 solid stage as the final, orbital stage:

Then we can get a payload of 55 kg to orbit by supersonic air-launch:

Posted by Robert Clark at 3:02 PM No comments:

The Morpheus lunar lander developed by NASA demonstrates how successful NASA can be when it takes a low cost approach to developing new systems. Not only can the Morpheus be used for unmanned robotic landers, but scaled up it can produce a manned lunar lander at orders (plural) of magnitude lower cost than the $10 billion NASA previously estimated for a lunar lander. Then Project Morpheus becomes a prime example of how NASA's Technology Transfer program can be utilized.

The orders of magnitude reduction in cost is important for enabling the low cost commercial space approach to BEO (beyond low Earth orbit) spaceflight. For this to work, first, the companies that engage in the commercial space approach have to be convinced they can make a profit on such ventures. This is much easier to do when the development costs are in the ten's of millions of dollars range rather than the billions of dollars range

Now note that by taking a smaller, modular approach to BEO spaceflight, as exemplified for example by the Early Lunar Access proposal, it is only a lander that would be needed to be developed for lunar flights.

This actually is also the case for asteroidal flights since the delta-v to near Earth asteroids is actually less than that to the Moon. No hugely expensive super heavy lift launchers would be required. Only currently existing launchers, or those fully paid for by the developer such as the Falcon Heavy, would be used. Then that huge proportion of the development cost of such missions for the HLV would be eliminated.

Then at least the development costs, aside from the launch costs, can become manageable for private financing. Then private BEO proposals such as by Golden Spike Company. Planetary Resources, Inc., Deep Space Industries, etc. become feasible.


Bob Clark
Posted by Robert Clark at 1:53 PM No comments:

NASA's Technology Transfer Program intends to partner with U.S. companies to commercialize technology developed at NASA. One example is the autonomous landing system for robotic lunar landers (ALHAT) developed by NASA which will be used by the Moon Express team for their Google Lunar X-prize entrant.

I suggest another example that has more important commercialization potential are the methane engines developed for NASA's Project Morpheus robotic lunar lander. The Firefly launch company intends to make small methane fueled orbital launchers. The largest single development cost for a launcher are usually the engines. By using the engines already developed for the Morpheus lander for the Firefly, a significant proportion could be cut from the development cost.