A contingency plan for a fast return of the U.S. to space. 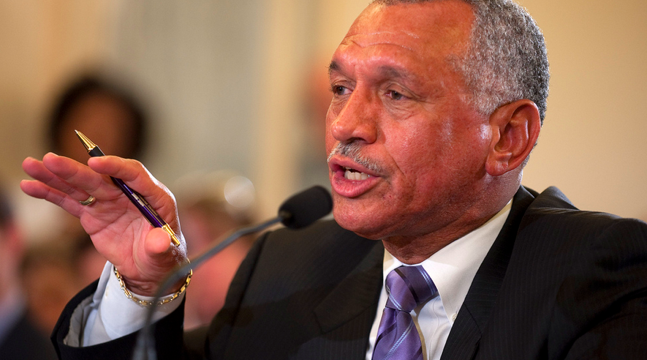 
The congressmen kept asking for a short-term contingency plan to return America to space in case of seriously deteriorating U.S/Russia relations and Bolden kept responding with the three-year plan to have commercial crew flying. But there is a shorter term plan. BOTH SpaceX and Boeing have said they could be flying crew by next year with funding. So if the congressmen want a shorter term contingency plan, provide that required extra funding.

At the Humans 2 Mars 2014 conference I asked Bolden about such a contingency plan. It's about at the 15 minute mark in this video:


He responded that SpaceX has not been selected yet as the crew launch provider. OK, then also fund Boeing so they can also return crew to the ISS by 2015.

There has been talk in Congress of only having one crew launch provider. I strongly disagree with that plan. We all saw what can happen when you only have one launch provider and that one goes down, as happened with the shuttle. SpaceX is furthest along so they should be one of the providers. But on the other hand the Boeing capsule would be carried on the Atlas V which has had a remarkable string of successful launches, which SpaceX is nowhere near to matching yet.

Russian Deputy Prime Minister Dmitry Rogozin mocked the U.S. space sanctions against Russia saying NASA would need to get a trampoline to get its astronauts to the ISS. This led Elon Musk to state through his twitter account that SpaceX would be revealing its man-rated Dragon 2 at the end of May: 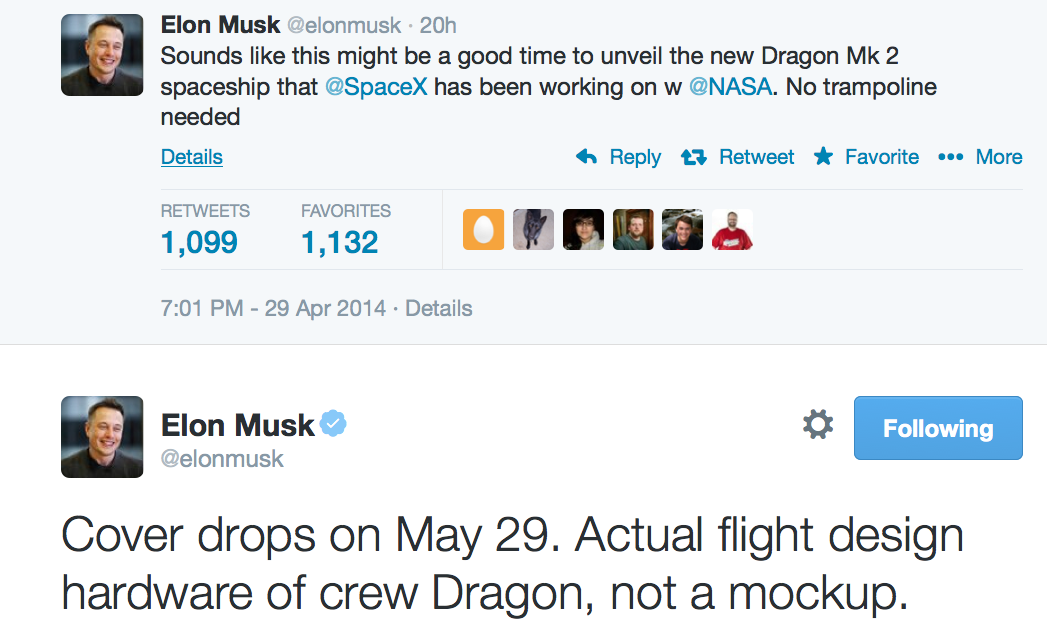 Now, if SpaceX is flying their own crews to LEO in 2015 and there is still a strained relationship between the U.S. and Russia then, then it would be extremely embarrassing for NASA to still be paying Russia to ferry NASA astronauts to the ISS when SpaceX will already be flying American crews to LEO.

A solution would be for NASA to at least draw up a contingency plan including cost estimates of how much extra funding it would take to also take NASA astronauts to the ISS. Then the onus would be on Congress to decide if they want to provide NASA with the extra funding to do so.

Allan Savory: How to green the world's deserts and reverse climate change

I found this on a climate change skeptic site but it is an important lecture whatever your opinion on that issue.
The presenter was haunted by the decision to kill 40,000 elephants in his home country of Zimbabwe to preserve grasslands from being overgrazed. Since then he has dedicated himself to finding other ways of preventing desertification.
He believes he has found one as he describes.

Interestingly this technology also now makes possible economical space solar power (SSP). For SSP a key detriment has been the huge weight thought needed to be sent to space. For instance solar cells typically have a 100 watt per kg weight, though more recently they are in the 200 watts per kg range. So if you wanted to get a 1 gigawatt system, about that required for a large city, you would need to send 10,000,000 kg to orbit just in solar cells alone, hugely expensive

BUT you would also need to send the mirrors to orbit. And that is a second key advance we have also now reached, lightweight space mirrors. The Sunjammer space mirror to test solar sail technology is scheduled to be launched January, 2015. It has a 1,200 sq. m area at only a 50 kg weight.This can collect about 1 megawatts of power. So at 1,000 times larger, it could collect 1 gigawatts of power at only 50,000 kg mass, which could be launched by a single Falcon Heavy. Another consideration though is solar cells are not 100% efficient. They are actually about 30% efficient. So you might need 3 times larger collecting area. Still only 3 launches of the Falcon Heavy.

Actually though some recently work on solar concentrators have also been able to use the heat created, thereby increasing the energy efficiency to 80%. So you may get close to the area size for a 100% efficient system.

Interestingly some recent work on carbon nanotubes may be able to make the mirrors even lighter:

Researchers produce strong, transparent carbon nanotube sheets.
Aug 18, 2005
"Strength normalized to weight is important for many applications,
especially in space and aerospace, and this property of the nanotube
sheets already exceeds that of the strongest steel sheets and the Mylar
and Kapton sheets used for ultralight air vehicles and proposed for
solar sails for space applications, according to the researchers. The
nanotube sheets can be made so thin that a square kilometer of solar
sail would weigh only 30 kilograms. While sheets normally have much
lower strength than fibers or yarns, the strength of the nanotube
sheets in the nanotube alignment direction already approaches the
highest reported values for polymer-free nanotube yarns."

This is more than 1,000 times better than the Sunjammer sail. The transparent nanotubes sheets would have to be given a thin reflective layer. But this is commonly done with telescope mirrors and add little weight to the mirror. Actually it's been found that nanotube properties are highly tunable so it may be possible to create these thin, strong nanotube sheets that are themselves reflective rather than transparent.

Notably, this would provide a market for getting large amounts of mass to orbit for the space solar power to be applied globally for electricity generation. Then this may finally be the "killer app" for generating a large enough market for space access to bring the costs down and thereby make space access routine.

Gravity measurements from Cassini have provided further evidence that Enceladus has a subice liquid ocean. It is being regarded now as a prime target in the search for extraterrestrial life. The question is how to reach that ocean through what may be 40 km of ice. There have been various proposals for drills. However, NASA has modeled the plumes seen to arise from the "tiger stripes" on Enceladus as coming from vents that attach to the ocean below. Then a simpler method may be to reach the ocean by traveling through these vents.

This graphic shows how the ice particles and water vapor observed spewing from geysers on Saturn's moon Enceladus may be related to liquid water beneath the surface. The large number of ice particles and the rate at which they are produced require high temperatures, close to the melting point of water. These warm temperatures indicate that there may be an internal lake of liquid water at or near the moon's south pole, where the geysers are present.
http://www.nasa.gov/mission_pages/cassini/multimedia/cassini20080207.html


In this model the temperatures don't have to be particularly high, just near the melting point.

This method may work to reach subsurface liquid water for other outer solar system bodies expected to have them such as Europa, Titan and Ceres.

As a feasibility test we might try it to explore subsurface though deep-sea hydrothermal vents here on Earth.

According to this model the temperatures might reach a maximum of 400 °C. If we can develop a robot to travel through these conditions quite likely it would also work in the conditions for the vent systems of these outer solar system moons.

In an upcoming blog post I'll discuss how the Falcon Heavy at a 53 metric ton(mT) payload capacity and the first version of the SLS at 70 mT could each be used to conduct sample return missions from these outer solar system moons.

At the Humans 2 Mars 2014 conference it was mentioned "white smokers" during an astrobiology session. These are lower temperature than the "black smokers" so might be easier to explore internally: 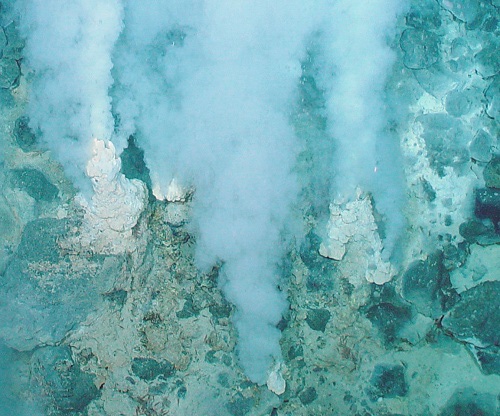 White smokers are seafloor hydrothermal vents that are cooler than black smokers. They deposit light-colored silica minerals as well as some sulfides.
https://web.archive.org/web/20130329102456/http://geology.about.com/od/geoprocesses/ig/hydrothermal-features/white-smoker.htm

Since they are smaller however we would need smaller robots to explore them.

JPL is investigating robots that can explore fissures in volcanos. They are also considering how they could be used to travel to the subsurface through fissures on worlds such as Europa and Enceladus: