The worldwide space community was amazed by the success at which SpaceX was able to launch the Falcon Heavy and land the two side boosters back at the launch site:

This led the current head of ESA Jan Woerner to suggest that ESA should promote reusability for future launchers. But, Woerner argues, the currently planned version of the Ariane 6 using two solid side boosters and with no reusability is so far along it should probably be completed:

However SpaceX is progressing so rapidly with reusability, and reduced costs, that by the time the Ariane 6 is expected to reach full operation in 2023 it's high cost may make it obsolete.

But in fact a faster, and much cheaper alternative is possible for the Ariane 6 that would have also have the advantage it could be made reusable: and that is to give the Ariane 5 core an additional Vulcain 2 engine so it can lift off without needing the solid side boosters.

According to studies by the French space agency CNES this could be done for only a $200 million development cost:

On the lasting importance of the SpaceX accomplishment, Page 3: towards European human spaceflight.
https://exoscientist.blogspot.com/2013/05/on-lasting-importance-of-spacex.html

This is compared to the multibillion dollar development cost for the Ariane 6 version with side boosters.

I had previously written about the possibility of giving the Ariane 5 a second Vulcain engine here:

However, that was in the context of producing a SSTO. But SSTO's are still controversial. And in any case it would have a lower payload capacity than the solid booster version of the Ariane 6, and couldn't, in itself, fulfill the important role of launching GEO satellites.

So I'll discuss the case of giving the Ariane 5 core a second Vulcain engine while keeping an upper stage. I was surprised that my calculation showed this version without side boosters was able to get close to the 6.5 ton to GTO requirement ESA set for the Ariane 6 just with the two liquid stages, no solid side boosters.

This article discussed the various options that were being considered for the Ariane 6 including a version that added a second Vulcain engine to the Ariane 5 core: 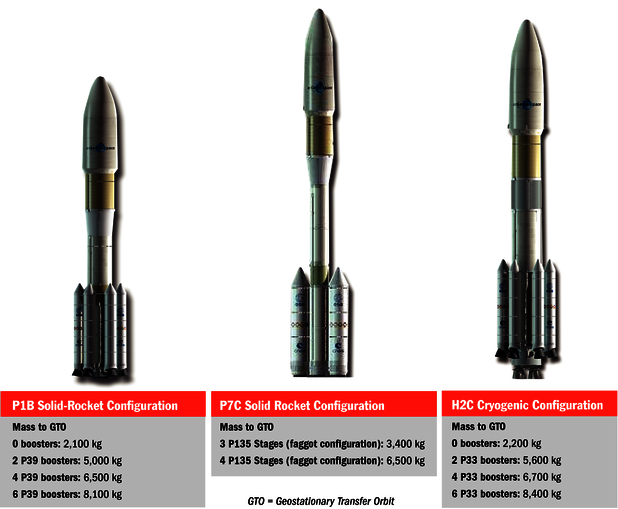 You see it only lists 2,200 kg to GTO with the two stage H2C all-liquid configuration of the Ariane 6.

And even more surprisingly, my calculation shows my two-stage version could get the high GTO payload without using the expensive new upper stage being planned for the Ariane 6 with the new Vinci engine. It could do it with an already existing cryogenic Ariane H10 upper stage.

Use publicly available sources for the specifications of the Ariane 5G core, Vulcain 2 engine, and Ariane H10 upper stage to enter in data into the Schilling calculator. The calculator takes the vacuum values for the Isp and thrust even for first stage engines, since it already takes into account the diminution of these values at sea level. Then with two Vulcain engines the input page looks like this: 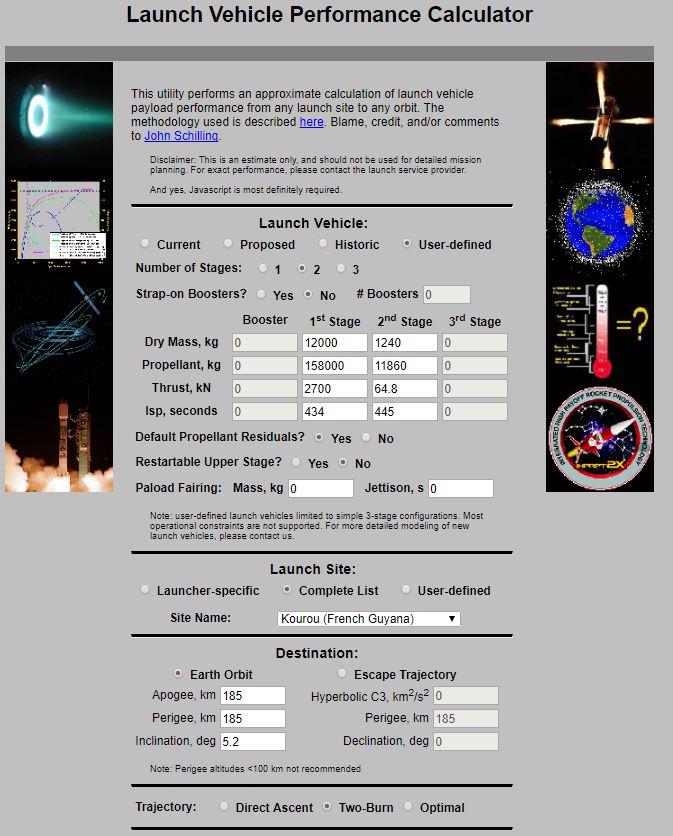 Note that while the thrust indicated for the first stage at 2,700 kilonewtons (vacuum) is well above the rocket gross mass, the sea level thrust for the two Vulcains is about 190,000 kilogram-force. With payload, this would not be enough to lift off. A couple of solutions. One would be to change the mixture ratio at lift off to increase the oxidizer to fuel ratio. This decreases Isp, but increases thrust. Another possibility is that liquid fuel engines can be run at some percentage above their rated values. For instance the space shuttle main engines could be run at 9% above their rated thrust values and the latest version of the SpaceX Merlin engines run at about 15% above the Merlins rated thrust value.   Another possibility would be to reduce the propellant load. I'll look at this last solution in a moment.

In any case with these specifications the calculator gives this payload to LEO: 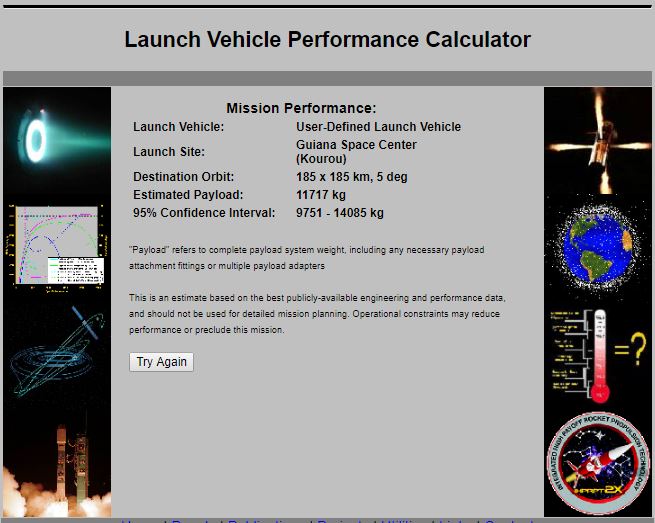 Now to get the GTO payload, change the "Apogee" entry from 185 km to 35,000 km. Then the calculator gives the result: 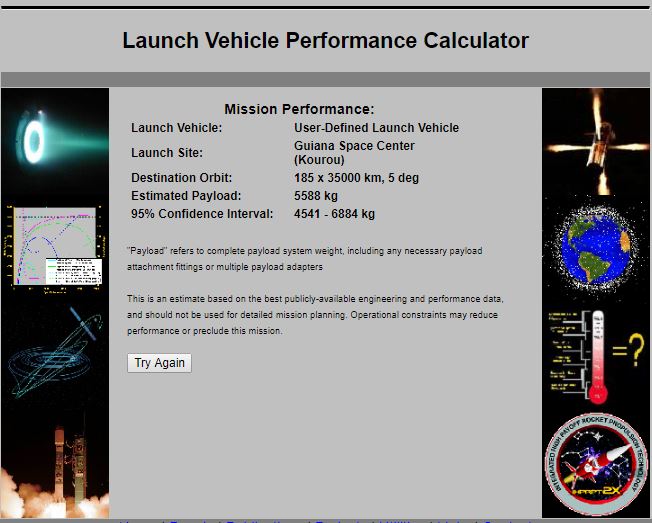 As shown by the RL10-B2 engine, with a nozzle extension a hydrogen-fueled engine can get a vacuum Isp in the range of 465 s. So change the first and second stage Isp's to 465 s and increase the vacuum thrust proportionally. Then the payload for the LEO case would be: 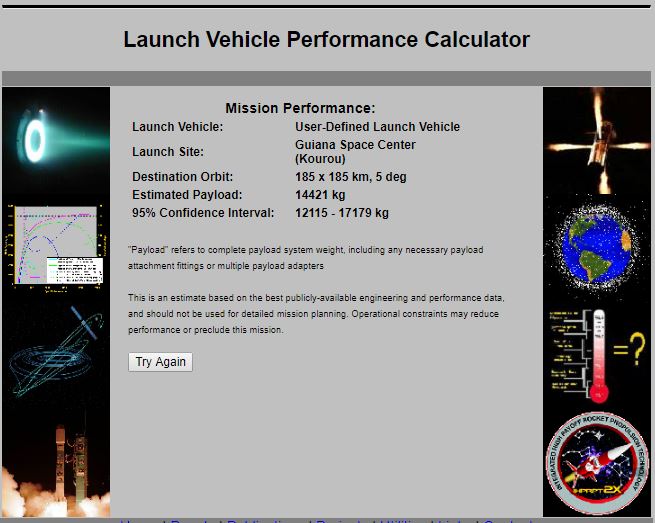 And the payload to GTO would be: 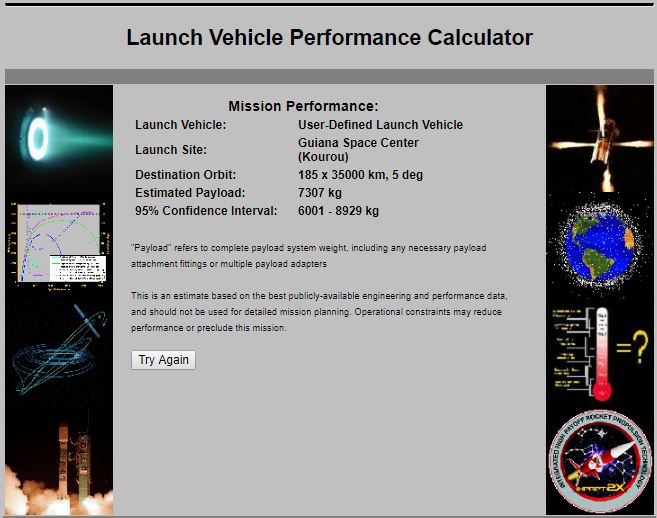 And Yet Even More.
Beyond the importance of giving Europe a reusable, low cost launcher, there is also the fact that being all liquid-fueled, no solid motor boosters, Europe now would have an orbital launcher that could be used for manned spaceflight. Europe would finally have its own independent manned spaceflight capability.