SLS for Return to the Moon by the 50th Anniversary of Apollo 11. 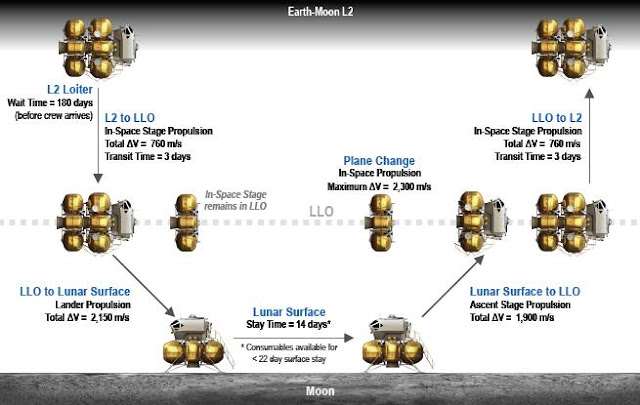 The Early Lunar Access [1],[2], proposal of General Dynamics came as quite a surprise to those in the industry when it was first proposed in the early 90's. It suggested manned lunar missions at half the mass needed to LEO and at 1/10th the cost of the Apollo missions.
It was based on using existing launchers with small upgrades to keep costs low. The only part of it that was technically doubtful at the time was that you could get the lightweight 2-man capsule they were proposing at only a ca. 3.7 mT crewed mass.
Based on such a small sized capsule, they were able to get a manned mission to the Moon at only about 52 mT required to LEO using all cryogenic space stages. However, the 7-man Dragon capsule at a ca. 4mT dry mass suggests this is indeed feasible.
It is also interesting the architecture they were proposing for low costs was similar to what I suggested for the SpaceX Dragon via the Falcon Heavy launcher. It would use a single capsule to take the crew all the way from LEO to the Moon's surface and back again, i.e.,no separate lunar crew module. Also it would use as I suggested a single lander stage to take the crew capsule from low lunar orbit to the Moon's surface and then all the way back to LEO, rather than linking up with a return stage waiting in lunar orbit for the return.
This gives further confidence in the feasibility of the lunar lander plan using the Dragon with Centaur-style stages launched on the 53 mT Falcon Heavy.

Re: On the lasting importance of the SpaceX accomplishment.


Congratulations to SpaceX on their second successful flight to the ISS. However, it is disturbing that there have been engine anomalies on all the flights, the last being the most serious:


It is reassuring that the mission was able to be completed even with one engine shut down. However, I don't think that would be an acceptable state of affairs for manned flights to have an expectation that during any flight at least one engine would malfunction and need to be shut down, including to the extent that that engine would be destroyed, shedding debris in the process.
I think SpaceX should investigate the possibility of producing a larger version of the Merlin to reduce the number of engines required. It's been reported also that NASA is not too sanguine on the possibility of using so many engines on a manned vehicle.
There was a discussion of this possibility on the NasaSpaceFlight.com forum:

Should SpaceX aim for a 330,000 lbs engine rather than am F1 class engine?
http://forum.nasaspaceflight.com/index.php?topic=29277.0

The idea was generally disparaged on that forum, but I think it is a good idea. SpaceX was considering building a 1.5+ million pound thrust engine referred to as the Merlin 2 as part of a proposal to NASA for a heavy lift vehicle. They estimated a $1 billion development cost for the engine. Based on thrust size, we might estimate the development cost for this smaller upgrade at 1/5th of this so only $200 million. Given the billion dollar contracts SpaceX already has for NASA and commercial satellite launches, there is little doubt that SpaceX could again get private financing for the development of this engine.
SpaceX has shown that it is able to cut development costs when it follows a private financing path. I think that would be the ideal approach to follow in this case as well.
If they did develop the 330 klb. engine, that would still require 5 engines for the Falcon 9 v1.1 first stage. My preferred solution then to minimize the number of engines at an affordable cost would be to go for a 500,000 pound thrust engine. Again estimating based on thrust size, this would be a ca. $300 million development cost, not too much more than the 330 klb case. But in this case you would only need three engines.