Elon has said the current plan is for the BFR first stage, now called the Super Heavy, to have 35 engines, with 6 engines on the Starship for 41 engines total:

It may be possible to accomplish the same payload of a super-heavy lift launcher with a fewer number of engines, and significantly lower cost. But first ...

A Heavy-Lift Launcher.
A 100 ton launcher is commonly taken as a requirement for manned lunar landing mission. Running the numbers, the BFR’s upper stage in the tanker version, i.e., without the passenger quarters, being used as a first stage booster with an additional StarHopper-sized stage added could form a 100 ton launcher.

Note there is a tanker version of the BFR upper stage that will not have the passenger quarters and provisions for 100 colonists for a six month flight to Mars, but only an empty fairing. This is the version being discussed here. The Starship version, i.e., the one that does have the passenger quarters, will have significantly greater dry mass than the tanker version.

The term "Starship" is used in the title only for its current familiarity. It is actually only the tanker version of the upper stage being discussed here. 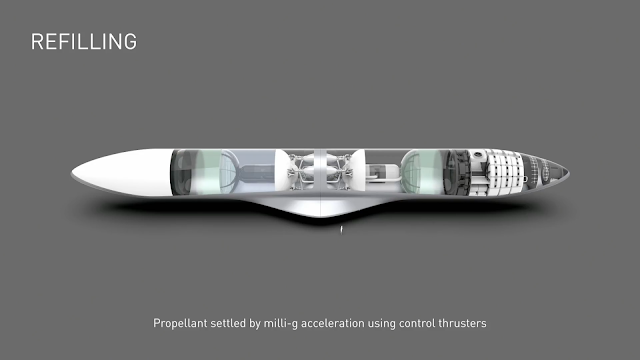 BFR tanker on left refueling the BFR Starship on the right.

The tanker version of the upper stage cuts nearly half off the dry mass of the Starship version which has the passenger quarters for 100 colonists on a six month flight to Mars. Then the tanker version would have a dry mass in the range of ca. 45 to 50 tons, at a propellant load of 1,100 tons.

SpaceX expects to test launch the BFR’s upper stage, likely in tanker or cargo version, i.e., without the passenger quarters, next year. Since the Starhopper is being built in parallel, SpaceX could probably have the weight-optimized Starhopper-sized additional stage ready in the same time frame. Then you could have a manned lunar mission class launcher by next year, in 2020.


A Super-Heavy Launcher.
The BFR’s 35 engine Super Heavy first stage will likely take longer and be more expensive to develop than the BFR upper stage. I suggest instead that SpaceX develop a triple-cored launcher using the BFR tanker stages as the cores. Judging from the expendable versions of the Falcon Heavy in comparison to the Falcon 9, this could launch about 3 times the payload of the TSTO, so to about 300 tons. This is about what the planned LEO payload of the BFR expendable is expected to be:

100mT to 125mT for true useful load to useful orbit (eg Starlink mission), including propellant reserves. 150mT for reference payload compared to other rockets. This is in fully reusable config. About double in fully expendable config, which is hopefully never.
2:48 AM · Jul 12, 2019·Twitter for iPhone
https://twitter.com/elonmusk/status/1149571338748616704?s=20

Elon on the other hand estimated the development cost of the full BFR as $5 billion. Likely, the triple core version would be significantly cheaper than this. For one thing the triple cores would only take 27 engines plus 3 for the Starhopper upper stage for 30 engines, much fewer than the 41 engines for the planned BFR.

Advantage with Altitude Compensation.
Another advantage of the triple cores is the increase in payload with altitude compensation. With a typical TSTO, alt.comp. might increase payload 25%. However, with a parallel staged launcher, alt.comp. typically can improve payload 40%. This improves even more so when cross-feed fueling is used in conjunction with alt.comp, typically by 100%. So this triple-cored version with the addition of alt.comp. and cross-feed could have a payload of 600 tons to LEO(!)

Another advantage of having a third stage for the BFR at a ca. 250 ton to 300 ton propellant range is that this stage could be launched fully fueled to orbit by the BFR expendable, whether it uses the current plan of a superheavy booster or the triple-cored option. Then a smaller mission size of ca. 25 colonists could be launched to Mars in a single launch, no multiple refueling flights required.

Judging from the fact the Falcon 9 reusable only reduced a proportionally small amount on the price, this one expendable launch would be cheaper than using 5 to 8 refueling flights. Also based on the long lag time between flights of the Falcon Heavy it could be launched much faster than the refueling, reusable version.


Note also this small mini-Starship if you will could serve as small SSTO launcher to LEO:

I argue this small, reusable SSTO would go a long way toward making spaceflight routine since it would be low cost and could be purchased and operated by independent owners.

Then private, independent owners can make their own manned interplanetary flights.

See here also for the argument a reusable SSTO can actually be more cost effective than a reusable TSTO because the two-stage loses 50% of its payload on reusability while a SSTO only loses a proportionally small amount:

The recent successful test hop of the SpaceX Starhopper raises again the possibility of it being used or more accurately a Starhopper-sized stage being used as a lander for the Moon and Mars.


For brevity, this Starhopper-derived stage weight optimized to have a comparable mass ratio as the Starship cargo/tanker version of ca. 25:1 to 30:1, I'll refer to just as the Starhopper stage.

For Moon missions, I had originally just wanted the Starship to be used as a first stage and a Starhopper stage to be used as a second stage, i.e., without a Superheavy booster, for a launcher for lunar missions. This would be 100-ton class launcher. It would be cheaper than using the Superheavy booster. In this case, though you would still need a service module propulsive stage and a lander propulsive stage, which would still needed to be designed and constructed.

NASA has contracted with SpaceX and other space companies for proposals for a lunar lander:

Blue Origin and SpaceX among winners of NASA technology agreements for lunar landers and launch vehicles
by Jeff Foust — July 31, 2019

SpaceX also is rapidly progressing with the Raptor engine so that vacuum optimized engines will be available for near term lunar and Mars missions:

SpaceX’s space-optimized Starship engine could be ready sooner than later.
By Eric Ralph Posted on May 23, 2019
SpaceX CEO Elon Musk says that there is now a chance that a vacuum-optimized version of the Raptor engine will be ready for near-term Starship launches, indicating that development has either been re-prioritized or is going more smoothly than expected.

Then if SpaceX were to use a Starhopper stage it would already have the lander for a lunar mission. With a full BFR being ready by 2020, with a Superheavy booster or using triple Starship cores, and the Starhopper only needing to be weight optimized, SpaceX would have a full lunar landing capable rocket already in 2020.

Moreover, with the Starhopper stage being able to be delivered to LEO fully-fueled by the BFR in expendable mode, the Starhopper would then have sufficient capability to carry the Dragon 2 capsule from LEO to the Moon's surface and back to Earth in a single stage. No refueling flights required.

In fact, it would have the capability to carry the Orion capsule and its service module at ca. 16 tons dry mass to the Moon and back, as long as the service module was unfueled, with all propulsion at the Moon being done by the Starhopper stage.

Both the Dragon and Orion capsules are rather small in diameter compared to the 9 meter diameter of the BFR though. You would need a rather large adapter for either of them. Then instead we could use a large hab for the purpose. Being able to deliver and return ca. 16 tons to the lunar surface, we could use a Transhab-sized crew/passeger module.

The Transhab was designed to be a habitat for a several months long Mars mission. It was to carry a crew of 6 at a mass of 13 tons and a 340 cubic meter volume. The Transhab was inflatable but at an inflated diameter of 8.2 meters it could be launched fully inflated on the BFR.

The Transhab could be transported to the lunar surface for longer stays a la the 6 month crew rotations on the ISS. The Starhopper would have enough capability so that the same stage could also return it to Earth without needing refueling.


Additionally, the Starhopper could deliver 35 tons of cargo to the Moon in a reusable mode where it returned to Earth after dropping off the cargo, or 55 tons to the Moon in a one-way, expendable mode. This would go a long way towards constructing the Moon base. 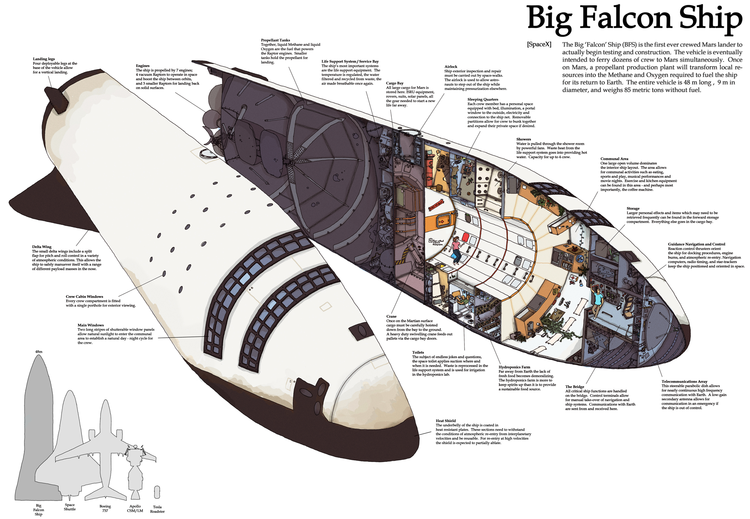 Image of the Starship with passenger quarters. For the Starhopper version the tankage section would be 1/4th the size.
Posted by Robert Clark at 1:50 PM 1 comment: