In this tweet I speculated on the possibility that the SpaceX's BFR upper stage, or BFS for Starship, when given wings might need no thermal protection at all:

Robert Clark @RGregoryClark
Replying to @elonmusk @LytovchenkoSerg and 2 others
Anyone know how the max temperature during reentry is reduced dependent on cross-sectional area? Using high strength, high temperature steel for wings, BFR may need no active cooling at all. Steel “isotruss” wings may allow wings at < 1% of landing weight …
7:31 AM - 15 Apr 2019
0 replies0 retweets0 likes

The idea behind it was an article that suggested with sufficiently low wing loading, weight per wing area, an orbital stage might need no thermal protection at all on reentry:

Wing loading (the vehicle’s weight divided by its wing surface area) is a prime parameter affecting flight. The antique aluminum Douglas DC-3 airliner had a big wing with a low loading of about 25 psf (pounds per square foot of wing surface). At the other end of the spectrum, the Space Shuttle orbiter has a high wing loading of about 120 psf. This loading, combined with an inefficient delta-shaped wing, makes the orbiter glide like a brick. A little Cessna 152 private plane features a wing loading of about 11 psf and modern gliders operate down around 7 psf. A space plane with huge lifting surfaces and a very low wing loading might not require any external thermal insulation at all. Building a space plane with a wing loading of, say, 10 psf should not be an impossible proposition. Perhaps some day it will be done.
http://www.thespacereview.com/article/1880/1

The stage intended as the Mars colony ship with the passenger quarters and provisions for 100 colonists on a 6 month trip to Mars, the BFS, gave a pounds per square foot at above twice the 10 psf level:

According to Wiki it has a dry mass of 85 tons, with a diameter of 9 m and length of 55 m. The lateral surface area of a cylinder is the circumference times the height (by imagining it sliced down the middle and flattened out.) The circumference is Pi times the diameter. However, the surface presented to the area stream when reentering broadside would be half the full area. So this area would be 0.5*Pi*9*55 = 777.5 sq.m. = 8,365.1 sq.ft.

Elon Musk may or may not have been raising the possibility (it's not always clear when Elon is being serious) of giving the BFS wings to get it below the 10 psf value with this tweet:

However, the tanker version, with no passenger quarters and just an empty fairing, might only weigh ca. 50 tons, based on a comparison of its size to the earlier, larger Interplanetary Transport System. This is a weight in pounds of 110,000 lbs. Using the same size for the tanker, the area presented to the air stream would still be 8,365.1 sq.ft, and the pounds per square foot would be 110,000/8,365.1 = 13.1 psf.

This might be workable to only need a small additional wing area to get it beneath the 10 psf. number.

However, it is interesting that some existing upper stages are below or close to the 10 psf number. For instance the Delta IV Medium upper stage:

Converting the weight to pounds and the lenghts to feet, the psf is:

The larger upper stage used on the Delta IV Heavy would also satisfy the 10 psf requirement:

The psf is then:

Note that the RL10 engine used on the Delta IV Medium, Delta IV Heavy, and Atlas V is both restartable and highly throttleable to be used for a vertical, propulsive landing:

In fact the degree of throttleability is such that it can do a hovering landing.

This is important for propellant saving on landing. SpaceX does a hoverslam approach to vertical landing because of the low degree of throttleability of the Merlin engines. This wastes a significant amount of fuel because the thrust has to be so much larger than the nearly empty weight of the stage.

In fact for powered landing of a stage the required fuel reserve mass is commonly taken to be only in the range of 10% of the landed, i.e., dry mass of the stage. See for example the discussion here:

It's because even without wings a stage reentering broadside would burn off almost all the orbital velocity by atmospheric drag alone. The result is the stage would only be at terminal velocity at 100 m/s as it approached landing which would have to be cancelled by out by the engines. With deep throttling the required thrust, and so propellant burned, would be much reduced so as to only cancel the nearly dry weight of the stage.

Then so small wings or fins could be used to bring it under the 10 psf range. However, a bigger problem is the vacuum Merlin engine does not have high throttleability and being vacuum optimized, it can not operate at sea level for the landing. In upcoming posts I'll discuss methods to solve these problems.

Actually, small movable fins might be needed in any case, for the other cases as well. This is because upper stages tumble and break-up when they reenter. They would have to be actively controlled to maintain the same attitude presenting their lateral side to the airstream to burn off the orbital velocity and to reduce stresses that would cause them to break up.

The planned movable fins on the BFS might be used:

Another possibility is the variable flaps at the rear of the ESA's IXV vehicle: 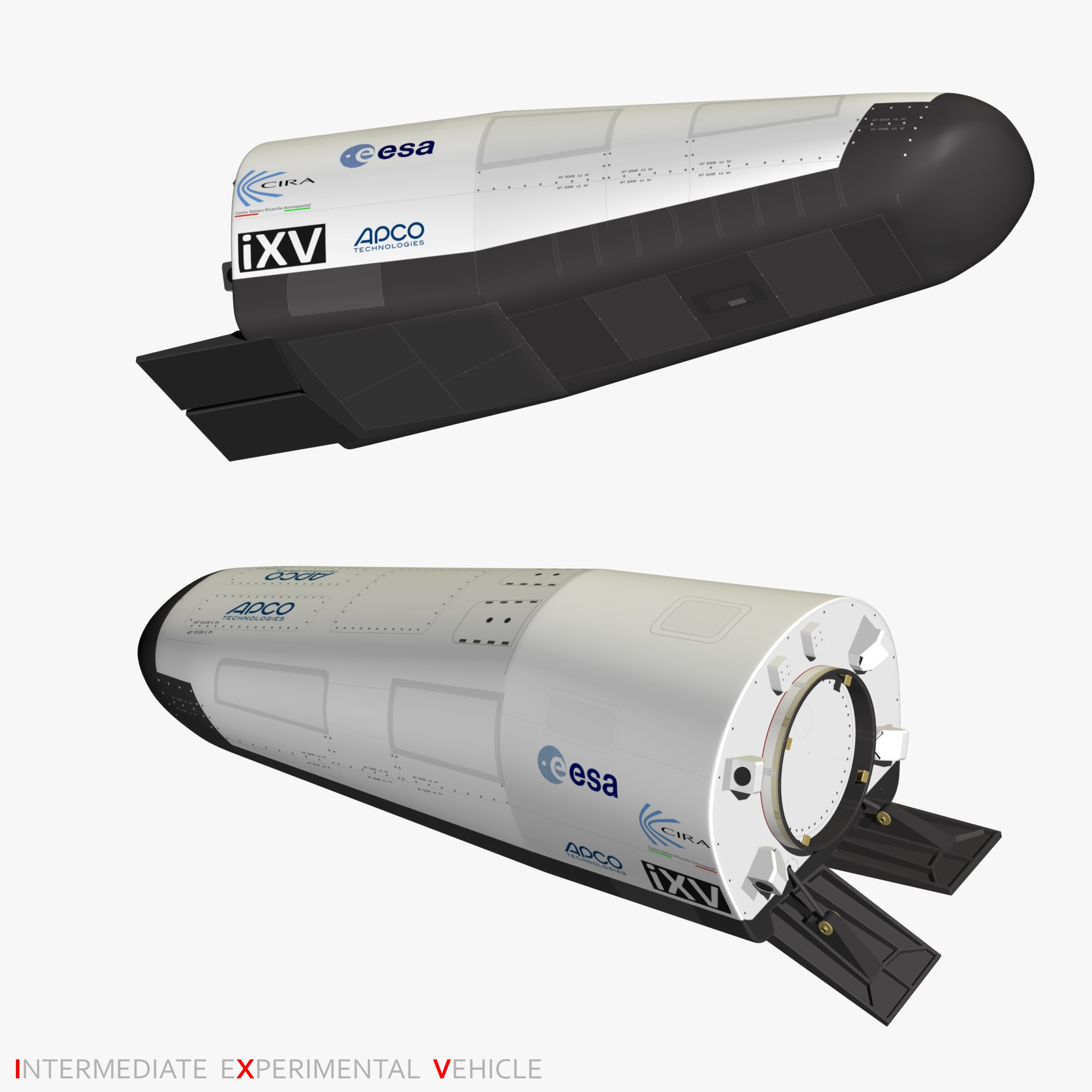 In the blog post "ESA's Callisto reusability testbed as an *operational* TSTO and SSTO", I suggested the Ariane 4 H10 upper stage be used for the Callisto reusability testbed, with its engine swapped out for the Vinci engine. It turns out this stage as well satisfies the 10 psf requirement for reentry without thermal protection. It had a 1,240 kg dry mass, 2.60 m diameter, and 11.05 m length. So the psf is: