A space tourism study concluded that in order for orbital tourism to take off, so to speak, the price would have to come down to $500,000 per person:

To date, only seven people -- beginning with multimillionaire businessman Dennis Tito in April 2001-- have paid to launch into Earth orbit, and they've reportedly plunked down between $20 million and $35 million for the experience.
Those are not the numbers of a thriving industry. But things could change dramatically if prices drop significantly -- down to about $500,000 per seat or so. That reduced rate could lure in hundreds of thousands of customers for orbital tourist trips, potentially generating revenues in excess of $100 billion per year, according to the study.

Note this is for flights to orbit, i.e., to LEO, not suborbital flights as with Virgin Galactic. Interestingly the Falcon Heavy might be able to make that price point by carrying airliner numbers of passengers. The Falcon Heavy is slated to cost $125 million for a flight to LEO. Then at a $500,000 price point it would have to carry 250 passengers.

You would need a passenger cabin to carry the passengers on the flight to orbit. As an estimate for a comfortable cabin size for a short travel time as with airliner flight we might compare this to the Boeing 757. In the 757-200 single-class configuration it can carry 239 passengers.

To carry the 250 passengers I suggest using the TransHab modified from carrying 4 to 6 crew for long space missions to having several rows and levels of seats for passengers on a 2 day or shorter trip to an orbital space station. The Bigelow space hotel BA 330 could also be used.

Transhab Module NASA's Johnson Space Center proposed a much larger and lighter inflatable 8-meter diameter "Transhab" module that also could be converted into crew quarters for future manned missions to the Moon and Mars. Credit: NASA via Marcus Lindroos.

According to the NASA page on the TransHab it has a inflated volume of 340 m^3, about the same as the Boeing 757-200 cabin. Then slightly changing the seat sizes or aisle size we should be able to fit 250 passengers in the TransHab volume.

For this many passengers we also need to calculate the amount of consumables needed, oxygen, food, and water. The book Expedition Mars estimates it as 5 to 10 kg  per person per day. Then this would be at most 2,500 kg for a 2 day flight. According to the NASA page on the TransHab, it weighs 13.2 metric tons. Allow also 100 kg per passenger and assume each passenger is allowed a space shuttle style orange flight suit at 12.7 kg and 10 kg for the seat. Then we're only up to 46.3 metric tons, within the 53 metric payload capacity of the Falcon Heavy.

However, it would be rather uncomfortable in that cabin  for that many people for two days even if allowed to float around the cabin once reaching orbit. We may want instead to do the Soyuz flight method that is able to cut the flight time from launch to ISS docking to only 6 hours.

But where to go once reaching orbit? We would need space hotels already in orbit. I'll estimate each passenger having his own 10 m^3 cubicle with shower. This would be about the size of a room 6ft x 8ft x 8ft. The TransHab at 350 m^3 could hold 35 of these cubicles. Eight of the TransHabs could hold enough cubicles to house the 250 passengers. In deflated form, the eight TransHabs could be launched in 2 flights of the Falcon Heavy.

For the cost for these TransHabs, the Astronautix page on the TransHab gives a price in 1998 dollars of $100 million:


American manned space station module. Cancelled 1998. Cost overruns soon forced NASA to consider other options for the International Space Station's habitation module. The space agency originally intended to use the same 8.2-meter long habitation module as the final 1991 Space Station Freedom design. In late 1998, NASA's Johnson Space Center proposed a much larger and lighter inflatable 8-meter diameter 'Transhab' module that also could be converted into crew quarters for future manned missions to the Moon and Mars. It was also possible that the module could be built and paid for by private industry and leased to NASA, although the exact configuration wasn't clear. Transhab and the 8.2-meter module appeared to be equally expensive ($100 million in 1998) and NASA had not made a final decision.
Article by Marcus Lindroos.

Keep in mind though this would be the price charged to the NASA, i.e., the government, for this module to be attached to the ISS. However, SpaceX and Orbital Sciences proved both with launchers and space capsules that development costs could be cut by as much as a factor of 10 by following the commercial space approach. Consider also the production cost for each vehicle is always a fraction of the development cost. Then the cost for each of the TransHabs as privately financed could be under $10 million each.

However,  even at a price of $100 million for the TransHab this might be feasible. For each of the 35 cubicles that would be $3 million that would have to be made up. Say the space hotel owner charged $100,000 per week for each cubicle. Then, at full occupancy, a TransHab could be fully paid for in 8 months.

That would be quite an expense though if the cost for each TransHab really were $100 million each, $800 million total for eight.

The inflatable habitats by ILC Dover designed for lunar habitats might also be used:

Bigelow Aerospace has suggested a price for its proposed Space Station Alpha at about three times the price point I was suggesting on a per volume basis. The Alpha station consists of two BA-330 modules. Bigelow is offering a 110 cubic meter space for lease for 2 months for $25 million. That amounts to about $280,000 for a 10 cubic meters space for one week. 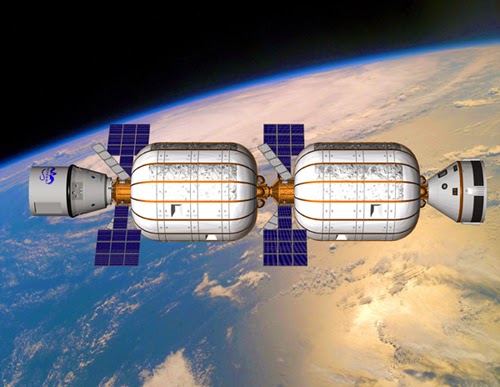 August 05, 2014
Bigelow Aerospace is hiring and targeting Inflatable Space Station Alpha to start launching in about 2017 or 2018.
http://nextbigfuture.com/2014/08/bigelow-aerospace-is-hiring-and.html

These prices though will undoubtedly come down as time goes on.

The estimates of hundreds of thousands of passengers and over a hundred billion dollars in revenues per year at a $500,000 price point is extraordinary. To put this in perspective note this would be more than an order of magnitude higher then current launch revenues. See the graph of the satellite launch market here:

Even if the estimate of a proposed passenger market is off by a factor of ten it would still double the current launch revenues. Launch providers have been criticized by knowledgeable observers of the industry as lacking in the will towards innovation, such as reusability. Their critique was that the launch companies reason "Why should we try to cut launch costs by, for instance, reusability when this would just shrink our yearly revenues?"

However, this survey shows, if valid, that in fact they would increase the launch market better than ten times by finding a new market, paying passengers. Every launch company in the world should conduct independent surveys to verify the results of this study. If true, than every launch company in the world should convert to reusability to cut their launch prices at least by a factor of 5 to bring it in the range of the approx. $2,000 per kg range SpaceX is proposing to offer for the Falcon heavy. For otherwise, they would be ceding a $100 billion a year market to SpaceX alone.

Posted by Robert Clark at 7:34 PM No comments:

In the blog post A SpaceX Heavy Lift Methane Rocket I discussed some possibilities for a heavy lift rocket using SpaceX's planned methane engine, the Raptor. Those calculations were based on the initial released values for its thrust of 660,000 lbs, 300,000 kilograms-force. However, recently SpaceX has said the Raptor may have a thrust of 1,800,000 lbs in vacuum, 1,600,000 lbs at sea level. So I'll give some revised estimates for its payload.

As before I suggest using the same tooling for the core stage as that used for the SLS core to save on development costs. Corresponding to the new higher thrust of the Raptor I'll use the full tank size of the SLS core, which would hold 1,000 metric tons (MT) of hydrogen-lox propellant. Since methane-lox is 2.4 times as dense as hydrogen-lox, the SpaceX methane-lox core will hold 2,400 mT of propellant. The relative densities of methane-lox compared to hydrogen-lox are given in Table 1 of this report:

In regards to the specifications of the methane rocket engine it should be noted the high vacuum Isp of 380 s  cited really would only be expected of a vacuum optimized nozzle. Such engines can not be operated at sea level. However, in an upcoming blog post I'll discuss some altitude compensation methods that will allow the engine to have this vacuum optimized Isp while still being able to operate at sea level. So I'll assume both the first stage and upper stage engines have the vacuum Isp of 380 s.

SSTO Case.
We'll use again Dr. John Schilling's Launch Vehicle Performance Calculator. Input the thrust as the value of the vacuum thrust in kilonewtons of 5 Raptors as 5*8200 kN = 41,000 kN, and the Isp as the vacuum Isp of 380 s. Input the propellant mass as 2,400,000 kg and the dry mass as 1/20th of this at 120,000 kg. For the "Default Propellant Residuals?" option select "Yes", and for the "Restartable Upper Stage?" option select "No". Selecting "Yes" for this last option would reduce the calculated payload.

Use the default altitude of 185 km. Select Cape Canaveral as the launch site with an orbital inclination of 28.5 degrees to match the latitude of the launch site. Then the Calculator gives the result:

Cross-Feed Fueling for Multiple Cores.
We'll just look at the 3 core case here. As described in the A SpaceX Heavy Lift Methane Rocket post, we emulate cross-feed fueling in the Schilling calculator by inputting for the two side boosters 2/3rds the actual  propellant mass, and also increase the first stage propellant mass by an additional 2/3rds. The rest of the specifications, dry mass, thrust, Isp remain the same.

Over 500 metric tons of payload! This rocket however would be truly massive at 3 times the mass of the Saturn V. This would likely require a new,expensive launch pad to handle a rocket this size.

Some methods of accomplishing the altitude compensation mentioned are discussed here: