Heat Radiators.
"As an example of the severity of this problem, let us examine the case of a
simple nuclear power plant whose energy conversion efficiency from thermal
to electric is approximately 10 percent. The plant is to generate 100 kW of
useful electricity. The reactor operates at approximately 800 K, and a
radiator with emissivity equal to 0.85 would weigh about 10 kg/m2. The
thermal power to be dissipated from the reactor would be about 1 MW. From
the Stefan Boltzmann Law, the area of the radiator would be about 50 m2 and
the mass approximately 500 kg. This seems quite reasonable.
However, we must assume that the electricity generated by the power plant,
which goes into life support systems and small-scale manufacturing, would
eventually have to be dissipated also, but at a much lower temperature
(around 300 K). Assuming an even better, aluminum radiator of about 5 kg/m2,
with again an emissivity of 0.85, in this case we find that the area of the
low temperature heat rejection component is 256 m2, with a mass approaching
1300 kg."
http://www.projectrho.com/public_html/rocket/basicdesign.php#radiators

This web site by the way provides a nice collection of the work that has been done on advanced space propulsion systems.

An additional problem though in regards to low efficiency conversion is that you need higher mass for the reactor and larger amounts of radioactive material that needs to be launched to orbit. For example in the blog post:

There might be some methods to reduce the heat that needed to be radiated away in the high efficiency scenario. For example Stirling engines can operate even at low temperatures. We could use these to make use of the heat at low temperatures coming from the turbines of  our generator.

There is also research on lightweighting radiators such as by using carbon-carbon composites:

However an interesting possibility exists that we might not need any radiators at all for the high efficiency case.

Note this would not obtain for the low efficiency, high output temperature case. If the output is at, say, 800 K to 1,000 K, then by the Second Law of Thermodynamics (Clausius form) we could not use this to cool the generator operating at, say, 300 K or below.

However, by exhausting down to cryogenic temperatures we could use the cold working-fluid to cool the generator.

The nozzle extension doubles the weight of the RL10 engine from 150 kg to 300 kg, so weighs 150 kg. The upper part of the nozzle is regeneratively cooled but the carbon-carbon extension is only radiatively cooled. The RL10-B2 engine puts out ca. 250 MW of power measured by its 110 kN thrust and 465.5 s Isp.

Because of the low mass of the spacecraft due to the short travel time the power level for the plasma propulsion can be less than 10 MW. Then, with regeneratively cooled upper nozzle section, the nozzle extension to bring the exhaust output down to cryogenic temperatures for this power level might only be 1/25th as large, so only 6 kg(!)

Correction to fuel replacement mass.
In the comments section to the "Nuclear powered VASIMR and plasma propulsion doable now, Page 2" post, Rok Adamlje noted that my estimate for the fuel canister mass that needed to be replenished was too small. I was taking it to be just the uranium fuel mass when the actual total canister mass may be ten times higher.

The summation in the numerator is the sum of the reciprocals of the natural numbers and is well approximated by the natural log function ln(n). So this will be:

Note though the length of time the engine will need to be run is actually less than 39 days because of the small mission size due to the fast travel time. So we'll need fewer replacement fuel canisters and the actual average specific power will be greater.

Also it could be much of the canister(s) can be reused, primarily replacing just the uranium fuel. This will also increase the average specific power.


In the blog post "Nuclear powered VASIMR and plasma propulsion doable now", I argued that nuclear space reactors already have the capability to do fast transit times to Mars using plasma propulsion systems such as VASIMR or Hall effect thrusters.

Low Power Operation for Long Life.
However, there was a key fact left out of that analysis: when space nuclear reactors are run at full power they only have limited lifetimes, measured in hours:

This is alright for the applications usually thought of the nuclear rocket engines where they are used only for a few minutes for takeoff and landing.
But for plasma propulsion as with other types of electric propulsion they achieve high speeds by running them continually for days. Note though that in examples such as the Bimodal nuclear thermal rocket (NTR), they have two modes of operation, a propulsive mode at full power, and an electricity generator mode at greatly reduced power.
It is in the low power, electricity generator mode that they can run for months to years. Then one idea to deal with the short lifetime at full power is to run the engines at an intermediate power level that will allow them to run for just the few days needed for plasma propulsion.
We'll use this report to estimate the possible run-times when operated at lower power:

This report is interesting in that it uses the nuclear thermal engines for high thrust maneuvers such as Earth departure and slowdown at Mars arrival, and electric propulsion for the long interplanetary traverse to Mars. I envision as well low thrust electrical propulsion would be best utilized if they spacecraft is sent far outside Earth's deep gravity well by either chemical or nuclear thermal propulsion before the electrical propulsion system is turned on.
The full power level for the engines used in the report is 545 megawatts thermal for each of the three nuclear engines, at a weight of ca. 2,200 kg each. They would only be run at full power for less than two hours however. Most of the trip the engines would be run in low power mode:

For the 1-year round trip BNTEP mission, the total operational time for the BNTR engines is 324 megawatt - days (MWD) which includes 1.75 hours of high thrust / high power mode operation totaling 40 MWD and 284 MWD of reduce power EP mode operation. Assuming 1.2 grams of U-235 consumed per MWD, the total U-235 fuel loss in each engine is 389 grams. Since each cermet fuel BNTR has in excess 200 kg, the burn-up is less than 0.2% which is quite acceptable.
A One-year, Short-Stay Crewed Mars Mission..., P. 7.

Then to get a maximum of 324 megawatt-days while using it only in the long life, low power mode for say a 39 day flight time, that would correspond to a power level of 8.3 megawatts for each engine. At a weight per engine of 2,200 kg, that corresponds to a specific power of 3,800 watts thermal per kilo.

Long Life by Multiple Nuclear Fuel Canisters.
The above method would be to run the engine just at much reduced power to get the long life. Another method would be to run the engine at full power but just have multiple nuclear fuel canisters that can be used when one gets depleted. The mass of the fuel as given in that passage above from "A One-year, Short-Stay Crewed Mars Mission", page 7 is 200 kg. The run time for the engine at full power is given in that report as 2 hours. Then for a 39 day run time you would need (24/2) * 39 days = 468 fuel canisters, for 468 * 200 kg = 93,600 kg. Plus the 2,200 kg for the engine this would be 95,800 kg for the nuclear power system. Since in this case the engine is always running at full power this would be 545,000,000 W/95,800 kg = 5,700 watts thermal per kilo specific power. You could improve the average specific power perhaps by a factor of 2 by jettisoning the depleted fuel canisters.


Short Flight Time Actually Gives Smaller Mission Size.
Actually in a follow up post I'll discuss the specific power is actually higher in both these methods because the engines will not have to be run the entire 39 days to get the high delta-v needed for the short flight times. The main reason is you can use a much smaller habitat perhaps only 6 metric tons when the flight time is only about a month compared to the 25 metric tons or higher usually estimated for a 6 to 8 month flight time. I discuss this in the blog post, "Propellant depots for interplanetary flight." This then would translate into a smaller fuel load and shorter burn time.

In fact, the surprising conclusion you get is the short flight time requiring high delta-v results in a smaller mission size.

Efficiency of Conversion to Electrical Power.
Remember to get VASIMR or Hall effect thrusters at the 39 day flight time, we only need 1,000 watts per kilo as discussed in "Nuclear powered VASIMR and plasma propulsion doable now". But this has to be electrical power, not the thermal power of the NTR's. To get the conversion of the thermal to electrical power, I suggest turbines modeled on the Space Shuttle SSME's hydrogen turbopumps. These have a remarkable power to weight ratio of 150,000 watts per kilo, and efficiency of 80%: 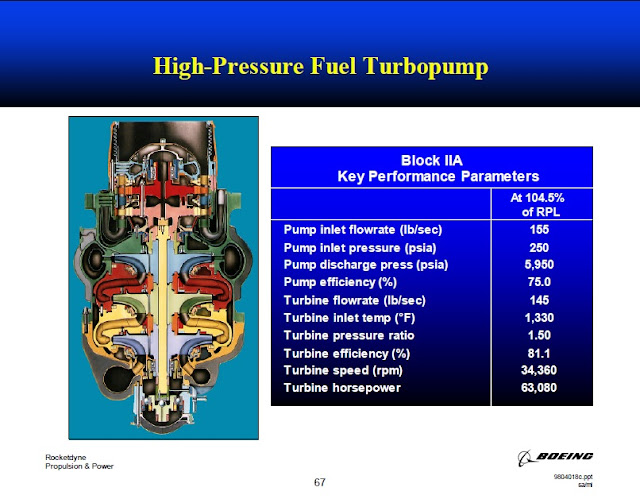 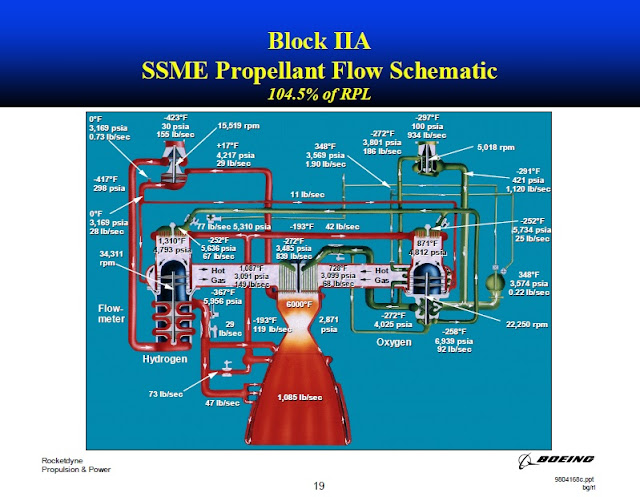 However, by being a space reactor we can have the pressure of the outlet be near vacuum and therefore get a much larger temperature drop. Then the Carnot limit can be above 90% and the 80% isentropic efficiency can put the thermal efficiency above 70%.
Once you have the conversion to mechanical power the conversion then to electrical can be 95% efficient.
Ground based power plants including nuclear ones may only get thermal conversion efficiency of ca. 30%. But this is limited by the Carnot limits of the temperatures of thermal source compared to that of the outlet, typically a cold water reservoir.
For the nuclear powered electrical propulsion, we want to have high efficiency to avoid needing large, and heavy, radiators, to reject the waste heat. If the efficiency were only 30% or below, most of the energy produced is simply thrown away and at great mass penalty.

Can We Improve the Burn Lifetime of Space Nuclear Reactors?
Space nuclear reactors have full-power lifetimes of just a few hours. This is compared to the fuel burn time of a few years for ground-based nuclear reactors before they need to be refueled. This is due to high temperature and high power level for their size for the space reactors. Indeed the temperature might be 3 times as high at full power for the space reactors compared to the ground ones.
Most disconcerting is the very small amount of nuclear fuel that actually gets burned because of the short runtime for the space reactors. From that passage in "A One-year, Short-Stay Crewed Mars Mission" cited above, only 0.2% of the nuclear fuel may get burned during the engine lifetime.
Compare this to the burn-up in ground-based reactors that might be in the range of 6.5%:

The reason why only a small portion of the nuclear fuel gets burned in any fission reactor is because the fission products after awhile build-up and inhibit the fission process. And the higher the power the reactors are run at for their size, the faster is the build-up of these fission products.
Then a proposal that might lengthen the lifetime of the space reactors is not to burn the fuel all at once but burn it in layers, outside in. If the layers are thin enough, we should get little blockage from the fission products. Once an outer layer fuel got consumed, we would remove that layer and allow the next layer in to react.
If we could get most of the fuel to be consumed, then we would need much less radioactive material to be sent to space so nuclear space propulsion would be much less controversial.
This method might also work for the ground based reactors. If the ground based reactors could use most of the fuel, much less uranium would be needed to operate a reactor and you would have lower operation costs and radioactive waste being produced.