Blue Origin made a significant achievement in successfully landing their New Shepard rocket after a suborbital spaceflight:


As their next development Blue Origin intends to make a several million pound thrust rocket capable of sending 25 metric tons to LEO. This would be a very large and expensive development for their first orbital rocket, comparable in size to the largest orbital rockets available now, larger for example than the Falcon 9.

I suggest an intermediate development for their first orbital rocket. Running the numbers, their New Shepard suborbital rocket could be used to make an orbital rocket using three cores with a smaller upper stage, a la the Delta IV Heavy.

It would have a payload to LEO in the range of 3,000 kg, about the size of the Arianespace Vega rocket. The Vega costs in the range of $35 million. Considering the small size of the New Shepard, even at three cores, Blue Origin should be able to beat this price.

Moreover, this version would have the capability to be reusable. SpaceX is planning to make the three cores of the Falcon Heavy reusable by returning the two side cores to the launch site and recovering the central core by a barge landing out at sea. Quite likely this would work for a 3-cored New Shepard launcher as well.

Specifications of the New Shepard BE-3 engine. 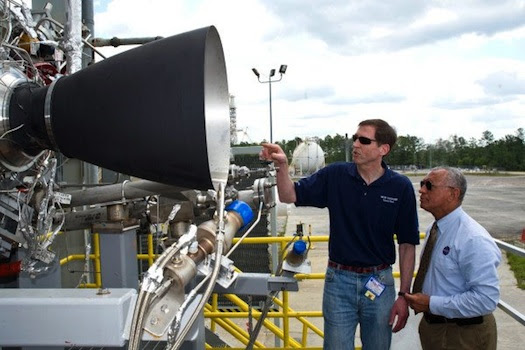 Here's a formula for calculating the sea level thrust from the vacuum thrust and back pressure:

We also need to calculate the Isp. One other piece of information will allow us to calculate this. This Blue Origin page gives the horsepower of the BE-3 as over 1,000,000 hp:

It is interesting that the diameter and sea level and vacuum Isp's are close to those of the RL-10A5,  the sea level version of the RL-10 used on the DC-X: 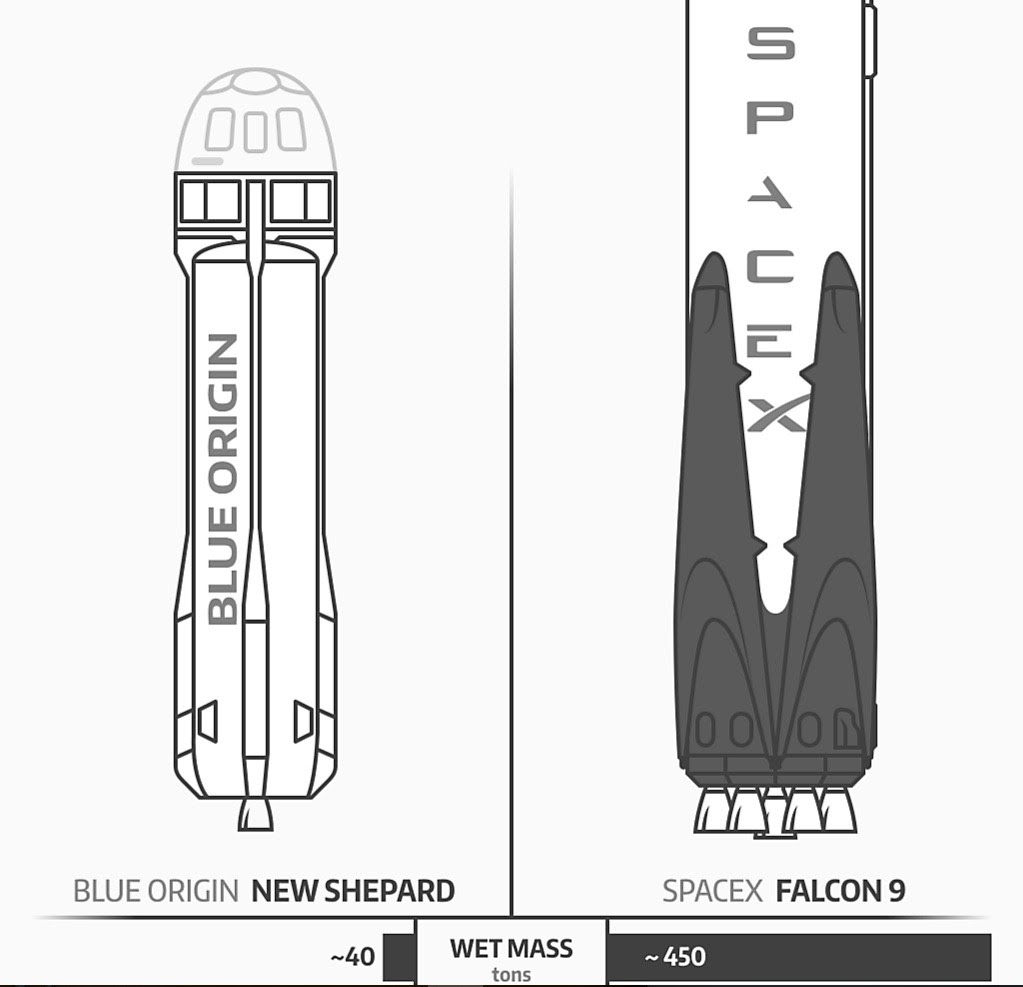 For the "Restartable upper stage" option check "No", otherwise the payload will be reduced. Select Cape Canaveral as the launch site and enter 28.5 for the launch inclination in degrees to match the latitude of the launch site.


This would be using an Arianespace upper stage. But this would be a competitor to their Vega launcher so that is problematical. Blue Origin could use instead the Rl-10B2 engine and their own constructed upper stage. The RL-10 though is a rather expensive engine. Another possibility is the 25,000 lb thrust hydrolox engine being developed by XCOR.

Altitude Compensation Increases Payload Even for Multistage Vehicles.
It is unfortunate that SSTO's have (incorrectly) been deemed unviable. Since altitude compensation has only been thought of in terms of improving the payload of SSTO's, little research has gone into such methods, with SSTO's not being considered worthwhile.

However, in point of fact altitude compensation improves the payload even for multistage rockets. As with the RL-10B-2 we can get a vacuum Isp of 462 s on the New Shepard hydrolox engine simply by the addition of a nozzle extension. Other methods of accomplishing it are discussed in the blog post "Altitude compensation attachments for standard rocket engines, and applications."

Increasing the Isp will also increase the thrust proportionally. So at a 462 s Isp for the BE-3, the thrust becomes 568.8*(462/360) = 730 kN. Entering these values into the thrust and Isp fields for the side boosters and first stage gives the result:


This now is a serious payload capability. Note for example NASA awarded Orbital Sciences with a billion dollar contract to deliver payload to the ISS with their Antares rocket with a 5,000 kg payload to LEO capacity.

Jonathan Goff on his SelenianBoondocks.com blog raised the possibility that a single New Shepard could serve as a booster for an orbital rocket. I confirmed it could at the 1 to 2 metric ton payload range by using the same type of hydrolox upper stage as discussed above in the triple-cored case:

New Shepard as a booster for an orbital launcher.
http://exoscientist.blogspot.com/2016/01/new-shepard-as-booster-for-orbital.html

It could also serve as a booster for a smaller launcher by using instead one of the Star solid rocket upper stages, giving a few hundred kilos payload. This would have the advantage that little extra development would be required.

Plus, it may allow Blue Origin to beat SpaceX at reusing a booster for an orbital launcher.