On the blog page "Altitude compensation attachments for standard rocket engines, and applications", I suggested various methods to accomplish altitude compensation with already existing engines. One method was a sort-of "inverted aerospike". It consisted of a movable spike pointed inward, rather than pointing outward as with the standard aerospike: 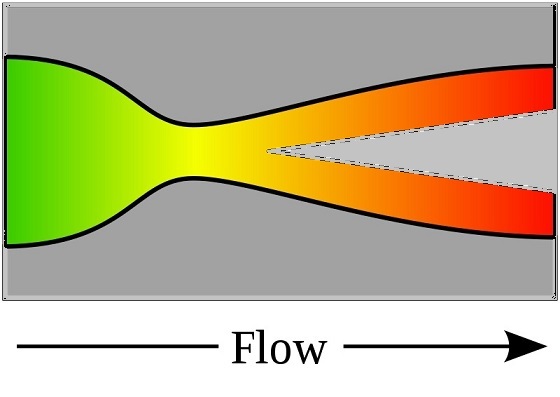 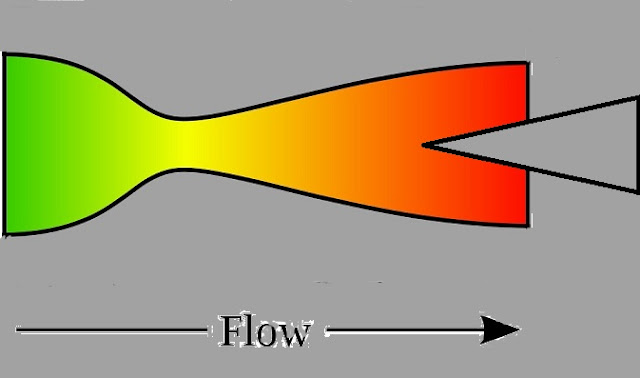 There are two disadvantages to this method. First the spike has to be movable so that adds mechanical complexity. Secondly, the size of the outer, fixed nozzle in order to achieve high Isp at high altitude has to be large. But this nozzle will be used all the way from the ground, so this will induce high drag at low altitude.

The reason why this nozzle has to be large is because you are not really using the altitude compensating capacity of a shaped spike on exit from the nozzle. The only purpose of the movable spike is to vary the size of the exit plane of the nozzle, to provide a variable area ratio.

But could we use a fixed nozzle and the usual outward-pointing aerospike? This would have the advantages that we could use the altitude compensating capacity of the usual aerospike, so we could use a shorter nozzle, and also have a fixed spike, reducing mechanical complexity.

The problem with this with a usual engine is you would need to change to a toroidal combustion chamber, an expensive change to an engine. So instead of this, we will also use an inward pointing spike so that the exit of the nozzle has a toroidal shape: 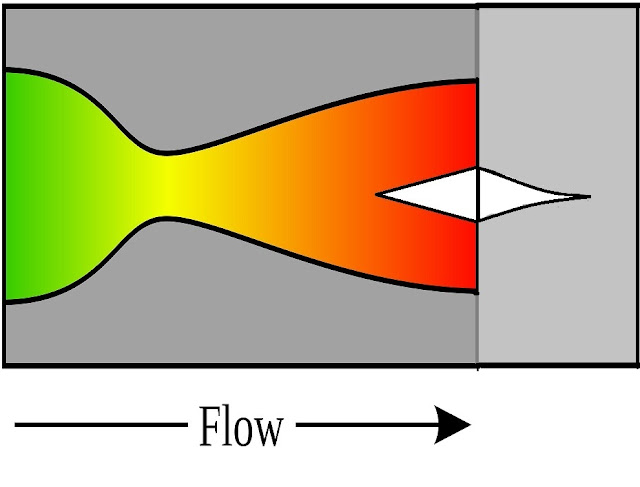 This now has two advantages. We will be using this as an attachment to a usual ground-firing engine and nozzle. Since these already expand the exit gases to a certain extent, you would need a much shorter, slimmer and lighter outward-pointing spike to accomplish the rest of the expansion at high altitudes. The usual aerospike has to accomplish the full expansion from ca. 100 bar combustion chamber pressures to near vacuum pressures at high altitude, requiring a large and heavy spike.

Another advantage is that nozzles for sea-level-firing engines actually overexpand the exit gases at sea level. This is because you want a longer nozzle to achieve at least moderate performance also at high altitude. But now, with the addition of the inward-pointing spike you can reduce the pressure at exit of the nozzle to that of sea level by reduction of the exit plane area. This will also improve the performance at sea level.

A smaller, faster version of the SpaceX Interplanetary Transport System to Mars, UPDATED, 10/15/2016.

In the blog post "A SpaceX Heavy Lift Methane Rocket, Page 2", I proposed some architectures for a Mars transport rocket. This was based on a quite large 1,800,000 lb. vacuum thrust of the methane-powered Raptor.

However, recently Elon Musk discussed the current version of the SpaceX Mars transport model called the Interplanetary Transport System (ITS). Here they are going back to a smaller version of the Raptor, at ca. 660,000 lb. vacuum thrust. In this version however, their booster will be quite large at ca. 7,000 metric tons (mT) gross weight. 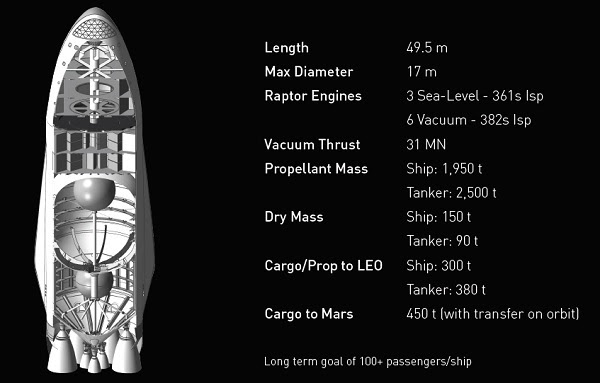 But because of the smaller engines in the SpaceX formulation they will use nine of the Raptors on the upper stage. I stated in the earlier blog post I wanted to use at most 5 of the larger Raptor engines to emulate the safety record of the 5 large engines on the Saturn V booster. However, SpaceX seems to have gotten the 9 engines on the Falcon 9 to work, and in any case you could just use the booster to send the cargo and habitats to space and use high safety rockets to launch the crew to meet up with the transport craft in space.

The objection could be made however, that this is supposed to be just an upper stage, not a booster stage. However, at his IAC presentation of this Mars transport system he stated that the upper stage in both the spaceship and tanker form could be SSTO. Furthermore, the tanker he said could be used a fast intercontinental transport craft. This means necessarily they would have to be able to launch from the ground. So it is not too much of stretch to assume they could be used as a first stage.


An advantage of making this smaller upper stage the actual booster is that Elon has said they will have a development craft within 4 years. So if we make now a smaller upper stage to go with it, we could have a valid Mars transport craft at that early date. If we made this new upper stage correspondingly 1/3rd size, then we would be able to get 1/3rd the crew size to Mars, so a crew of ca. 35 to Mars.

However, interestingly we might be able to use already existing upper stages on existing rockets for the upper stage, for instance possibly the famous Centaur upper stage used on the Atlas V or the Ariane 5 core itself used here as an upper stage.

We can estimate how much we could get to LEO using the ITS tanker as the booster and the Ariane 5 core as the upper stage. The required delta-v to LEO is 30,000 ft/sec about 9,100 m/s: Then for the propellant and dry mass values for the ITS tanker and Ariane 5 core we could get 225 metric tons to LEO:

This makes clear another key advantage of this architecture: whereas the original SpaceX ITS would require five flights of the ITS to refuel the upper stage spaceship, with this smaller version a single flight would be able to carry the spaceship to orbit as well as its fuel for its flight towards Mars.

But what would be the crew size for this smaller upper stage? We can estimate it by making a comparison to the delta-v possible in accordance with the stats of the ITS spaceship:

So we want the Ariane 5 case to be able to reach a delta-v of 5,400 m/s when fully refueled and firing in space headed towards Mars:

Elon in his IAC presentation says the ITS carrying its 100 member crew might be able to reach Mars in 80 days at a particular close Mars opposition. This is dependent on the departure delta-v however. In the blog post "Propellant depots for interplanetary flight". I noted that at a higher departure delta-v possible by using a smaller 6 metric ton habitat for only a crew of 3, the Ariane 5 used as the in space propulsion stage might be able to make it to Mars in only 35 days, when leaving at such a particularly close Mars opposition.

Dr. John Schilling's launch performance calculator is back up. This allows us to produce a more accurate payload estimate. The vacuum thrust for the 382 Isp Raptor is 3.5 meganewtons, 3,500 kN. So 9 would be 31,500 kN. We'll also increase the vacuum thrust of the Vulcain engine on the Ariane 5 to 1,450 kN in accordance with the increased vacuum Isp of 465 s. Inputting these and the other specs in the calculator results in:


So the calculator estimates 178 metric tons. This is less than the 225 metric ton estimate using just the rocket equation, but it still means a single flight could carry enough payload to fully refuel an Ariane 5 core upper stage for a flight to Mars.