Perhaps the evidence for HCQ effectiveness is there if we are willing to put together the clues: National Consumption of Antimalarial Drugs and COVID-19 Deaths Dynamics : an Ecological Study.
“COVID-19 (Coronavirus Disease-2019) is an international public health problem with a high rate of severe clinical cases. Several treatments are currently being tested worldwide. This paper focuses on anti-malarial drugs such as chloroquine or hydroxychloroquine, which have been currently reviewed by a systematic study as a good potential candidate and that has been reported as the most used treatment by a recent survey of physicians. We compare the dynamics of COVID-19 death rates in countries using anti-malaria drugs as a treatment from the start of the epidemic versus countries that do not, the day of the 3rd death and the following 10 days. We show that the first group have a much slower dynamic in death rates that the second group.”
https://www.medrxiv.org/content/10.1101/2020.04.18.20063875v2 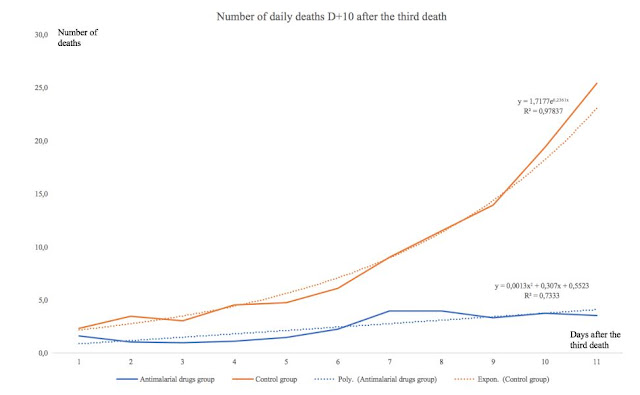 WORLD NEWS MARCH 12, 2020 / 9:51 AM
South Korea experts recommend anti-HIV, anti-malaria drugs for COVID-19
By
Elizabeth Shim
“The groups advised discretion among medical professionals, while recommending the administration of Kaletra, an anti-HIV medication that includes the drugs lopinavir and ritonavir.
Kaletra blocks the ability of HIV to replicate itself, and also inhibits the growth of cancer cells.
South Korean experts are also recommending the use of hydroxychloroquine in combination with the anti-HIV medication. HCQ is sold under the brand name Plaquenil, among others, and is used for the prevention and treatment of malaria.”
https://www.upi.com/Top_News/World-News/2020/03/12/South-Korea-experts-recommend-anti-HIV-anti-malaria-drugs-for-COVID-19/6961584012321/

Treatment Response to Hydroxychloroquine, Lopinavir/Ritonavir, and Antibiotics for Moderate COVID 19: A First Report on the Pharmacological Outcomes from South Korea.
“Conclusion: This first report on pharmacological management of COVID 19 from South Korea revealed that HQ with antibiotics was associated with better clinical outcomes in terms of viral clearance, hospital stay, and cough symptom resolution compared to Lop/R with antibiotics or conservative treatment. The effect of Lop/R with antibiotics was not superior to conservative management. The adjunct use of the antibiotics may provide additional benefit in COVID 19 management but warrants further evaluation.”
https://www.medrxiv.org/content/10.1101/2020.05.13.20094193v1

Indonesia to keep prescribing two malaria drugs for COVID-19 despite bans in Europe.
“The world’s fourth-most populous nation has since late March recommended that chloroquine and its derivative, hydroxychloroquine, be widely administered, including to coronavirus patients with moderate to severe symptoms, according to Food and Drug Monitoring Agency guidelines.”
https://www.reuters.com/article/us-health-coronavirus-indonesia-drugs/indonesia-to-keep-prescribing-two-malaria-drugs-for-covid-19-despite-bans-in-europe-idUSKBN2341XG

India Promotes Hydroxychloroquine, as WHO Stops Trials Over Safety Issues
BY AILA SLISCO ON 5/26/20 AT 7:42 PM EDT
https://www.newsweek.com/india-promotes-hydroxychloroquine-despite-who-stopping-trials-over-safety-issues-1506658

Commentary on “Hydroxychloroquine and azithromycin as a treatment of COVID-19: results of an open label non-randomized clinical trial” by Gautret et al.
Mondher Toumi & Samuel Aballea
Journal of Market Access & Health Policy, 8:1, 1758390, DOI:10.1080/20016689.2020.1758390
...
“Hydroxychloroquine treatment with massive testing and limited confinement has successfully worked in South Korea to control the outbreak with an impress- ively low rate of fatalities[44].”
...
“So far, European decision-makers have shown very little ability to learn from China [45] and South Korea [44], the only two countries that have been able to control the outbreak. Cultural differences, language barriers, and arrogance from the old Europe may cer- tainly explain why best practice knowledge sharing failed in this situation.”
https://doi.org/10.1080/20016689.2020.1758390

CORONAVIRUS
The Battle Over the Numbers: Turkey’s Low Case Fatality Rate.
BLOG - 4 MAY 2020
“Despite the prevalence of the virus among the population and rapidly increasing infection rates, what is striking is Turkey’s lower death rate. Turkey’s death rate per 1 million population is 37, making it even more successful than most comparable European countries for COVID-19. On the basis of official figures, Turkey ranked better than Germany, which has received a great deal of attention and admiration for its low fatality rates.”
COVID-19 Rates (as of 30 April 2020)
https://www.institutmontaigne.org/en/blog/battle-over-numbers-turkeys-low-case-fatality-rate

By Orla GuerinBBC International Correspondent, Istanbul
Turkey embraces hydroxychloroquine
The country has public health lessons to offer, according to acting head of the World Health Organization (WHO) in Turkey, Dr Irshad Shaikh.
"Initially we were worried," he told the BBC. "They were having 3,500 positive cases per day. But what has worked is testing. And they did not have to wait five or six days for results." He also credits the quarantine, isolation and contract tracing measures but says it's too soon to judge Turkey's treatment protocol for patients.
Controversially that includes the anti-malarial drug, hydroxychloroquine, as standard. It's much touted by President Donald Trump - but has been roundly rejected by the latest international research.
The WHO has temporarily suspended it from their trial of possible treatments for the virus. That followed research published in the Lancet which suggested hydroxychloroquine can cause cardiac problems in Covid-19 patients, and could do more harm than good.
We were given access to a hospital where it has been part of the standard treatment for thousands of patients. The Dr Sehit Ilhan Varank hospital, a two-year old-state hospital, is also state of the art. It's a bright, spacious battlefront against the virus. 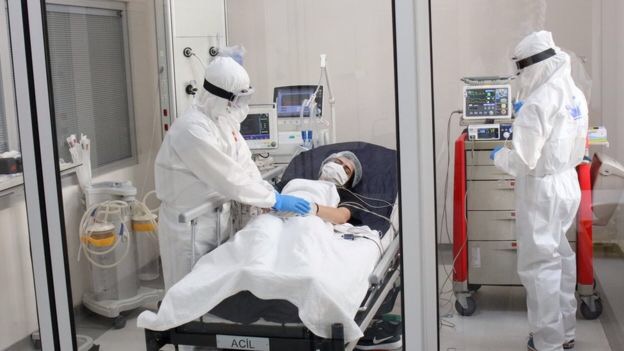 Chief doctor Nurettin Yiyit - whose art work is on the hospital walls - says it's key to use hydroxychloroquine early. "Other countries are using this drug too late," he says, "especially the United States. We only use it at the beginning. We have no hesitation about this drug. We believe it's effective because we get the results."
https://www.bbc.com/news/world-europe-52831017

It can be argued that because of confounding effects this is not a firm argument for the effectiveness of HCQ against COVID-19. For example many of the Asian countries have much reduced rates of obesity compared to Western countries, and obesity is a key risk factor for poor outcome for COVID-19.

More persuasive would be rates of infection and death within the same country. In this post I discussed some doctors in Italy who found HCQ effective with early treatment: Success in Italy reported in early treatment of COVID-19 using hydroxychloroquine.

NEWS | april 28, 2020, 5:40 pm
Hydroxychloroquine VS Covid-19, a therapy considered effective but controversial. The opinion of the Infectivologist Pietro Garavelli.
https://translate.google.com/translate?sl=auto&tl=en&u=https%3A%2F%2Fwww.newsbiella.it%2F2020%2F04%2F28%2Fleggi-notizia%2Fargomenti%2Fattualita-1%2Farticolo%2Fidrossiclorochina-vs-covid-19-una-terapia-considerata-efficace-ma-controversa-il-parere-dellinfet-4.html

And this report noted greatly reduced recent COVID-19 death rates in two Italian provinces and suggests antivirals such as HCQ as a possible explanation:

"In the two provinces under investigation, the treatment is currently based upon antiviral agents (Chloroquine / Hydroxychloroquine or Lopinavir / Ritonavir), intensive respiratory support [18, 19], and, from the latest days of March, low molecular weight heparin and monoclonal antibodies against inflammatory cytokines (e.g. Tocilizumab), which showed some preliminary, promising results [18, 20-23]."
https://www.medrxiv.org/content/10.1101/2020.05.23.20110882v1?versioned=true

In regard to this report however, I am dismayed that the authors decided to release a second version where they deleted all mention of HCQ:

In the first version, the authors report on the antivirals used in treatments which included HCQ. So that must have still been true in the second version released three days later.

Another case where great differences in COVID-19 death rates occur within the same country is in France:

A Look at COVID Mortality in Paris, Marseille, New York and Montreal.
Posted on May 23, 2020 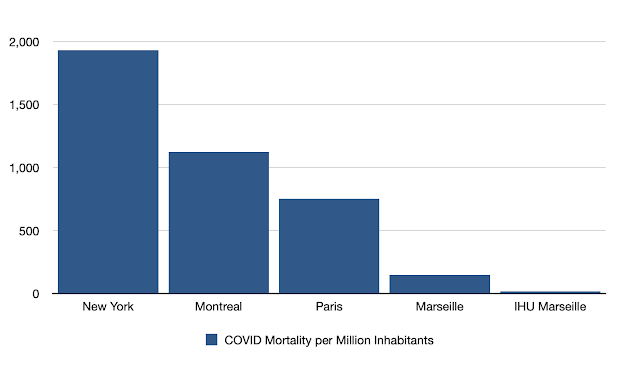 The table compiled by France Soir shows that, in Marseille, 3295 COVID patients were treated with the hydroxychloroquine – azithromycin bi-therapy, while 1564 were not.

In Marseille, the case fatality rate among those treated with the bi-therapy was 0.52%, while it was 8.63% for those who did not receive it. 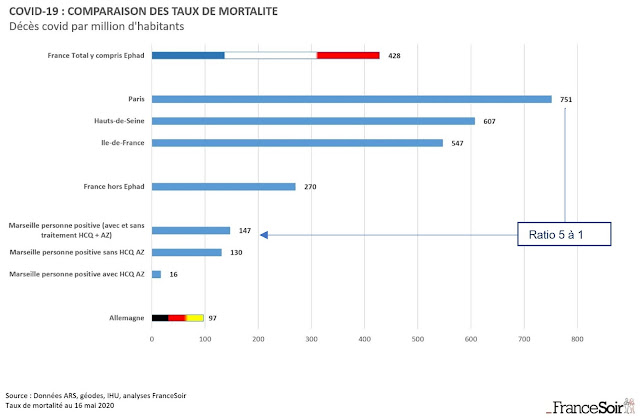 Dr. Raoult in noting this disparity has asserted that COVID-19 is disappearing in Marseille:

During a discussion of treatments of COVID-19 the question of Indonesia and Singapore came up. A commonly given explanation for why the Asian countries have death rates at 50 to 100 times lower rates than Western countries is because of their greater testing. However, Indonesia belies that explanation as it counts among the worst in testing but among the best in lowering the death rate:

But as shown in the first image above it counts among the lowest in COVID-19 death rates. And like most of the Asian countries it advocates for extensive use of HCQ:

Indonesia, major advocate of hydroxychloroquine, told by WHO to stop using it.
Kate Lamb and Tom Allard
Indonesia, the world's fourth most populous nation, had told doctors to use the drugs to treat all COVID-19 patients with symptoms from mild to severe. The country has ramped up production since March, granting two dozen licenses to local manufacturers who have churned out millions of doses.

Singapore, again like most Asian countries has a remarkably low COVID-19 death rate. Singapore though does not promote HCQ as the primary treatment regimen for COVID-19. But actually it promotes a drug that might be even better, interferon.

In this blog post I wrote about an early report that claimed that HCQ was ineffective against COVID-19, "A new possible treatment for COVID-19: interferon alpha." I was really quite amazed in reading the various news articles about the report that the most important take away was missed: the report showed that for the patients in their study interferon alpha had a 100% cure rate against COVID-19!

It was really quite remarkable in reading the news articles about the report that the focus was so much on highlighting the (inaccurate) claim that it disproved HCQ, that science journalists and doctors reviewing the results of the report completely missed the surprising results on interferon it contained.

Since that report numerous other reports have come out reporting on the effectiveness of interferon of various types on treating COVID-19.

Based on the facts that they used an effective antiviral early and included the potent antiviral and anti cancer medication interferon as part of their treatment protocol, and that they have been very successful in keeping their death rates low, I think the Singaporeans treatment strategies should be investigated as possible models to follow for Western countries.

Another recent study reported on some surprising results:

Not only did quinine have antiviral capability in vitro against COVID-19 but at 10 times better effectiveness than HCQ or CQ!

Interesting! I’ve been puzzling about the low death rate in Germany compared to other European nations:

I once read someone suggest on Facebook that it was because the amount of tonic water, which is quinine in water, that the Germans drink. This possibility was discounted by medical professionals because of the low amount of quinine in tonic water:

Note also here that in alcoholic spirits the amount allowed is much higher:

A couple ways this could be tested would be to see if people who drink tonic water or mixed drinks with tonic water on a regular basis have reduced rates of COVID-19. Another test would be to see if regular users have higher levels of quinine or its metabolites in their blood, and if this is high enough to be protective according to this recent research.