About the article, “Observational Study of Hydroxychloroquine in Hospitalized Patients with Covid-19”. UPDATED, 6/26/2020

Attached below is an email message to the authors of a recent report on hydroxychloroquine and COVID-19, “Observational Study of Hydroxychloroquine in Hospitalized Patients with COVID-19.”  In the first part, I discuss a simplified approach to compensating for the fact that in non-randomized trials you often don't have comparable numbers in the treatment groups compared to the control groups. The method commonly used to compensate for this, "propensity score matching", is computationally complex and often leaves doubt about the validity of the calculations. The method I suggest is simple and can be done by anyone with a hand-calculator.

In the second part, I discuss a surprising calculation from the data. The authors had concluded that HCQ offered no benefit. But when I calculated the survivability numbers for intubated patients, those on ventilators, I was startled to find the ones on HCQ had twice as good survivability than those not on HCQ! This is an extremely important point because in general the survivability of patients on ventilators is so poor. In fact, in New York only 20% survive being on ventilators with COVID-19. It's mystifying that the authors did not find this significant enough to mention. If you have a medication that can double the chance of survival of patients on ventilators then that fact should be heralded rather than hidden.

Lastly, the authors have suggested in interviews that their results show HCQ is no better than "standard care". But it was not mentioned that in this study, and in actually in several other studies, what "standard care" means is that the patients are just given other antivirals, and one of them in this study is the potent antiviral and anticancer medication interferon. Just calling the control group under "standard care" would mistakenly give readers the impression that it is perhaps just bed rest and extra oxygen. Then what this study really shows is not that HCQ is ineffective but rather that it is no more effective than those other antivirals. And in actuality, that is also doubtful because those other antivirals did not have the good effect HCQ had for patients on ventilators.

Recent news releases from the RECOVERY trial suggest that hydroxychloroquine offers no added benefit in COVID-19 treatment, but that dexamethasone improves survival 30% for COVID-19 patients on ventilators.

It is easy to imagine that a drug for various reasons may be more effective for patients with different risk factors. For example, HCQ is an anti inflammatory, as is dexamethasone, so it might be expected to help intubated patients. It is notable that CT imaging can show lung damage due to COVID-19. Then whether or not HCQ does have this effect of reducing lung inflammation for COVID-19 patients might be something observable in real-time on CT scan.

This would be extremely important for determining its effectiveness in such cases since it could be seen right away if it were working or not, rather than waiting to see if the patient survived or not, which could be due to other factors anyway.

At least one other study has shown that HCQ improves the survival for ventilated patients:

Quite notably the authors observed in real time a reduction in the level of IL-6, a key marker for inflammation, during the treatment with HCQ. So from both CT imaging and inflammation marker readings we could tell if HCQ or other anti-inflammatories were having a beneficial effect on patients under severe disease.

About your article on HCQ treatment for COVID-19. 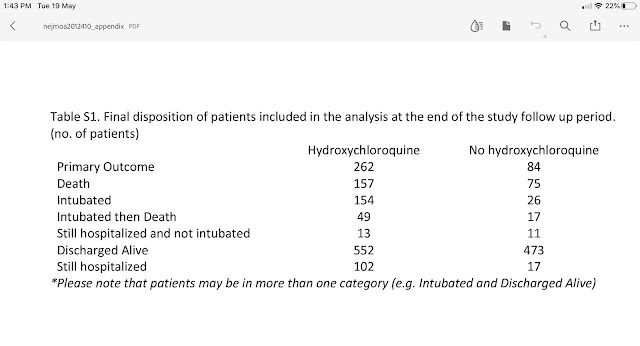 Hello. I was very interested to read your article, “Observational Study of Hydroxychloroquine in Hospitalized Patients with Covid-19”. I have a few questions I hoped you or someone on your team could answer.

In reference to your Table 1 (attached), how do the “propensities” go into the calculation of the likelihood of death? For hypertension, when expanding the non-HCQ no. from 38 to 146 for propensity, do you keep the same ratio of deaths to the total in the category?

For example, if originally, the ratio of deaths was, say, 13/38 in the non-HCQ group in the hypertension category, when expanded to 146 cases is the ratio made to be 50/146? That would seem to me to be a reasonable thing to do since the intention is to compensate for a likely higher rate of death in this category, which would unfairly inflate the mortality rate for the HCQ group since so many of them had hypertension.


So it would be extremely important to find drugs that would improve that number.

Adding “deaths” to “intubated” complicates the analysis. So I looked just at intubated.
From your Table S1 in the Supplemental Appendix file (attached), we get:

So HCQ is twice as good for survival for intubated patients.

So focusing just on this category of intubated patients gives another example where you would want to break the cases up into the various risk factors and compare survival between HCQ and non HCQ groups. Then you could also calculated a more accurate death rate by using the method I described in part I.) above. Getting survival to ca. 70% using HCQ or perhaps higher would be extremely important.

III.) I was also extremely interested to see that all patients, HCQ and non-HCQ, took interferon. Interferon is a potent antiviral and anti cancer medication. There have been multiple studies now showing interferon shows benefit in treating COVID-19. Then the closeness of HCQ and non-HCQ numbers may have been because the interferon improved the outcomes of both groups. In order to assess the usefulness of HCQ, clearly that would be better illuminated if it were compared to a non-medicated control group.

No doubt for medical ethical reasons though, you didn’t want to leave any patients unmedicated, even the controls. Also, I presume you also wanted to give the HCQ group the interferon since the HCQ was an unproven medication. By the way Dr. Raoult has been criticized in his studies because he didn’t use controls. He says for medical ethics reason he didn’t want to leave patients unmedicated. I think you can see this is the same reason in yours and other studies assessing HCQ they always gave the control groups other medications.

But this leaves doubt about the conclusion that HCQ offered no benefit. A more accurate description would be the HCQ offered no ADDITIONAL benefit over using just interferon alone. Let me explain this another way. Suppose other medical professionals took literally the conclusion that HCQ offered no benefit. Then they might conclude they didn’t have to give these patients even under severe disease ANY medication. By making clear instead this was in comparison to interferon they would understand there might be other medications such as interferon that could work just as well or better.