The SLS is now projected to cost $4 .1 billion per flight. Because of that severe cost it is projected to only fly once per year. This can not form the basis of a sustainable Moon colonization plan. But suppose we could make the SLS reusable? It’s already known the side boosters can be made reusable as with the shuttle program. The engines on the SLS core stage were derived from the shuttle engines which were intended to be reused up to 100 times. However, since the SLS was intended to be expendable the shuttle-derived engines on the core were designed cheaper to be expendable. However, any rocket engine even an expendable in reality is reusable at least 10 times or more. This is because they have to be certified for several firings for testing purposes. This is described by the well-regarded space expert Henry Spencer:

>I think this is an area where critics can speak the loudest.  Today's

>existing engines all leave something be be desired as true, good SSTO engines.

>This is mostly due to history.  Most engines (other than SSME's) were

Actually, this does not have a lot of bearing on their suitability for

RLVs.  Most ELV engines are, despite their application, reusable, because

they have to be developed and tested.  The F-1 was specified for 20 starts

as part of the service-life tests.  DC-X's RL10s looked "pristine" after

>...In terms of using SSME's, sure those can used,

>although doing something to reduce the required level on maintenance on

>the existing engines is quite desirable...

was that, with a *lot* of work, you could probably get SSME maintenance

costs down to $750k/engine/flight, which is unsatisfactory if you're aiming

Then even reusing the vehicle 10 times could result in a factor of 10 reduction of launch cost, if the maintenance cost could be kept relatively low. That quote about $750, 000 maintenance cost after a lot of work may seem low but from memory I recall it being in the range of $1 million to $2 million per engine after several years into the shuttle program.

But how to land the SLS core? Starting the SSME’s is a complex process. Modifying them to be air-startable would not be trivial. Instead, I suggest using the method proposed for making the Centaur a lunar lander, multiple pressure-fed side thrusters for a horizontal landing. 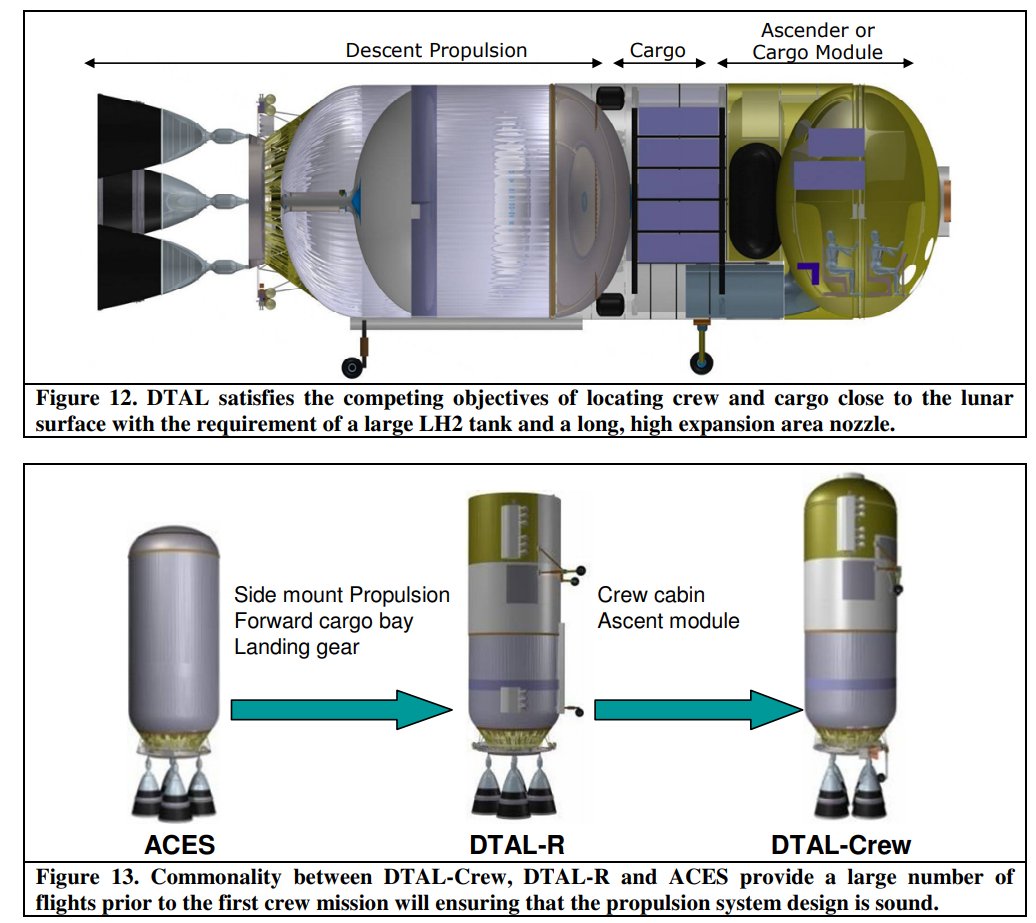 Note then that for a stage reentering to Earth broad-side almost all the reentry velocity is burned off aerodynamically just by air drag so that the stage reaches terminal velocity at approx. 100 m/s. For a stage nearly empty of fuel, this low amount of velocity could be cancelled relatively easily by pressure-fed thrusters with the thrusters running on just the residual of propellant left in the tanks.

About the landing, there would be additional development cost for the horizontal landing thrusters.  But pressure-fed thrusters are a relatively simple technology. Compare for example the time SpaceX spent developing the Draco thrusters on the Dragon to the time developing the Merlin engine. And from discussion of the thrusters on the Starship they seem more like an afterthought compared to the cost, time, and complexity put into the Raptor engines.

How about giving the RS-25’s on the SLS core restart capability? Again I’ll refer to the redoubtable Henry Spencer:

Subject: Re: One part Oxygen, two parts Hydrogen and BOOM!

>> The SSMEs use "torch" igniters, little oxygen/hydrogen burners firing into

>> the preburners and chambers.  The igniters themselves are ignited by,

>I see... obviously there cannot be a spark in a vacuum.

Not entirely true, but irrelevant -- when the igniter fires up, there's an

oxygen/hydrogen gas mixture there for the spark to travel through.

>there is more to the story?

start, and ground equipment (and gravity!) helps out with that.  It would

not be difficult to develop a variant which could start itself in space,

but there has been no reason to do that.

So likely it could be done by Aerojet, but I have no confidence they could do it in an affordable manner. Or more precisely, I have no confidence they would do it at an affordable price charged to NASA. For instance the RS-25 engine used on the SLS is derived from the SSME. It was expected to be cheaper than the SSME as it it used a lower parts counts and was not required to have the 100 times reusability of the SSME. But instead Aerojet charged more for this engine than the SSME even when accounting for inflation:

NASA will pay a staggering $146 million for each SLS rocket engine. The rocket needs four engines, and it is expendable. ERIC BERGER - 5/1/2020, 6:55 PM https://arstechnica.com/science/2020/05/nasa-will-pay-a-staggering-146-million-for-each-sls-rocket-engine/

About the payload lost on reusability, a stage that goes to LEO can remain in orbit for a few orbits to come back over the landing site so minimal propellant is burned to return to launch site.

If we do use a large upper stage, then the SLS would not go to orbit and as SpaceX showed you would need minimal fuel burned if landed down range, and so minimal payload lost, rather than returning to launch site. However, there is then the cost of the upper stage. If it were the Ariane 5/6, the cost of the Ariane 6 being as low as $77 million, it should be even lower than that without the Ariane side boosters or upper stage.

ARIANE 6 VS. SPACEX: HOW THE ROCKETS STACK UP The European Space Agency is planning to use the Ariane 6 for a variety of missions. ESA MIKE BROWN 1.24.2022 2:00 PM In January 2021, Politico reported that the Ariane 6 could launch for as little as $77 million. That’s a steep discount from the $177 million price tag for the Ariane 5. https://www.inverse.com/innovation/ariane-6-vs-spacex

About the landing thrusters, I wouldn’t give a contract for it to any of the usual aerospace companies under NASA’s cost-plus contracts. Instead I would prefer doing it “in house”, so to speak. I was quite impressed by a team at Johnson Space Center led by chief NASA engineer Stephen Altemus developing an unmanned lunar lander for only $14 million development cost:

The Morpheus lunar lander as a manned lander for the Moon. http://exoscientist.blogspot.com/2014/06/the-morpheus-lunar-lander-as-manned.html

The approach the NASA team used on saving costs was likely analogous to that used by commercial space in cutting costs.  No doubt also the pressure-fed engines being used rather than complex turbo-pump engines contributed to the low development cost.

This report estimates the launch market as approx. $48 Billion per year by 2030:

At a going rate of approx. $10,000 per kilo to LEO that would amount to 4,800 tons to orbit.  For a SLS lofting nearly 100 tons to orbit even in SLS 1 form, that’s quite a lot of launches it could take part in per year IF it could do it at a competitive price. If  it could do 10 reuses, that could bring the price down to $400 million per flight, or $4,000 per kilo, about the price of the reusable F9 when new, or a bit more than $3,000 per kilo of the used F9. But IF it could do 20 reuses, within the capabilities of some expendable engines, it would be $2,000 per kilo which would beat even the F9 used reusable price.

In point of fact though the first four SLS vehicles would all use original Space Shuttle engines. Then likely each has dozens of uses left in their operational lifetimes: