Beamed propulsion doable now, and with it space solar power.

A dream of advocates of low cost space access has been beam propulsion of various types, whether laser, microwave, or particle beams. 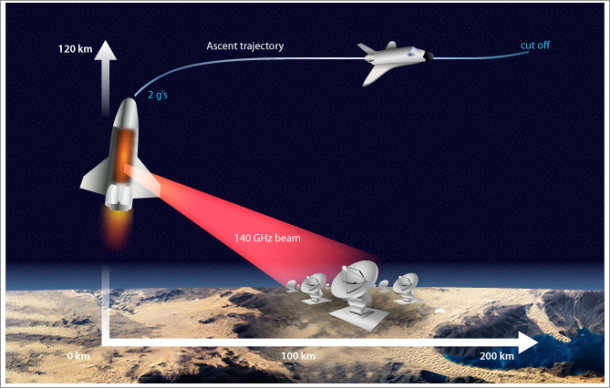 This image displays how beamed microwave technology could be used to launch payloads into space. Source: Escape Dynamics 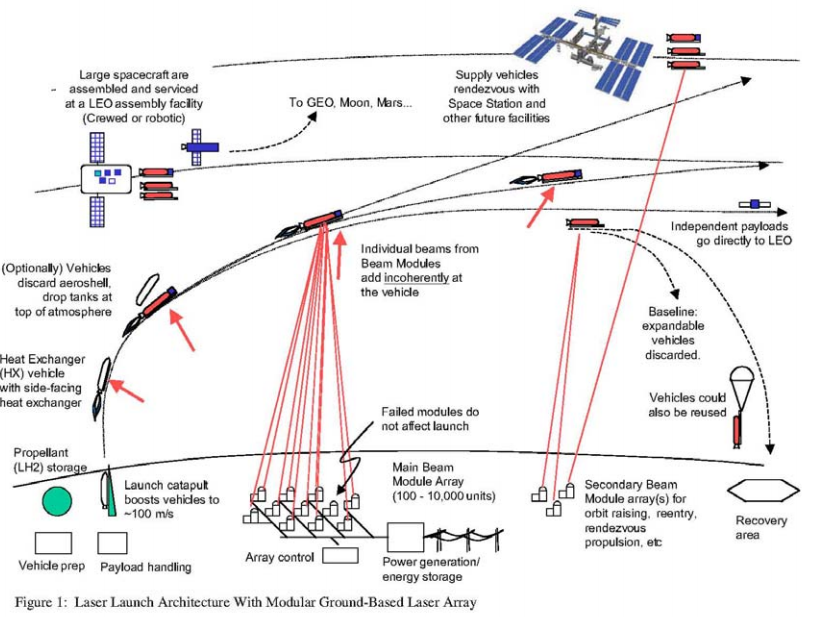 The problem has been the size of the laser beam installation needed to launch sizable payloads has been prohibitive.

The standard estimate for how much payload you can send to orbit with laser-propulsion is 1 kg in payload for 1 megawatt (MW) of laser power. See for example this report by the late Jordin Kare:

By this measure to launch a 5 metric ton capsule payload would require 5 gigawatts of laser power. In a follow up post I'll discuss some methods that might decrease the amount of power required.

A further consideration about the power requirements is that if done via some type of gas generator these are typically only about 33% efficient in conversion to electricity, so it would actually take 15 gigawatts. This would be like a nuclear power plant installation. Another possibility would be to use large chemical engines such as the SSME's to generate the heat energy which would then be converted to electrical energy. Three SSME's generated in the range of 27 gigawatts. This would suffice for in the range of a 9 metric ton payload.

It would take about a day to refurbish the engines for another shot, and then there would only be in the range of 100 shots possible based on the reusability of the SSME's. Considering this would be the primary cost and the vehicle itself would be highly reusable this would still result in a substantial reduction in launch cost.

Another possibility might be the nine engines of the Falcon 9. These also produce in the range of gigawatts of power. They are also intended to be reusable. But reportedly the number of reuses will only be in the few dozen range.

As I mentioned, the primary impediment to sizable payload laser propulsion has been the costs of the large laser installation. Currently, the costs for lasers are in the range $15 per watt. Then for 5 gigawatts of laser power that would be $75 billion. That's too much development cost for a single launch installation.

However, a key new advance may bring the laser cost within what is feasible. The key advance is in the realm of microscale LED's that have remarkably high power density per area:

The report discusses micro-scale LED's whose light output scales up to 300 W per square centimeter, 3 megawatts per square meter. So a gigawatt could be produced from an array 30 meters on a side.

Another article on the InfiniLED's:

Products, Materials & Tools | Jan 21, 2013
InfiniLED MicroLEDs achieve Ultra-High Light Intensity.
InfiniLED’s latest MicroLEDs (µLEDs) have produced record optical beam intensity. This new device is capable of producing up to 1mW of light from a single 20µm pixel at 405nm. This is equivalent to a light output density of more than 300 W/cm2 – the highest recorded for a commercially available LED type device.

A cluster of 25 MicroLEDs beside the tip of a needle. The parabolic reflector shape can be seen in the inset close-up
https://www.led-professional.com/products/leds_led_modules/infiniled-microleds-achieve-ultra-high-light-intensity

From the appearance of these micro-scale LED's, they should permit simple automated production to produce many copies to cover a macro-scale area to generate light even at gigawatt power levels. 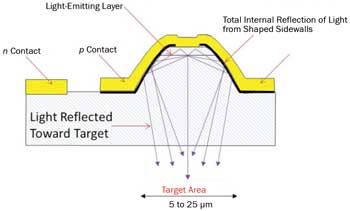 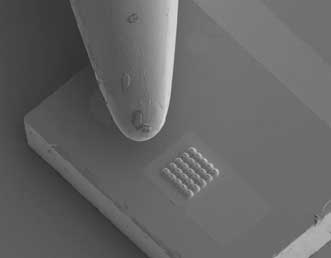 Figure 2. A cluster of 25 microLEDs beside the tip of a needle.

However, for laser propulsion to be useful the beam has to be focused on the target spacecraft. This is possible for the coherent light of a laser. However, it turns out what is only really needed is for the light to be collimated, that is, consisting of parallel beams, and the light produced by these microLED arrays is collimated. From the "InfiniLED MicroLEDs achieve 300 W/cm2 output density from tiny source" article:

The MicroLED is built using an LED semiconductor structure and can bedriven like standard LEDs. But the manufacturing process, which includesetching of a parabolic reflector at the semiconductor level, delivers acollimated beam like a laser (see the parabolic structure in the nearbyphoto). The result is both high-intensity light and high efficiency."This device can be seen as a cross-over between the power and collimationof a laser and the simplicity of an LED. The unique devices enable a rangeof applications," said chief commercial officer of InfiniLED, Bill Henry."InfiniLED are proud to have achieved the landmark performance of opticaldensity greater than 300 W/cm2. This was achieved without the need forexternal optics indicating the potential for further improvement of theperformance."

This means the light rays are parallel. But this is what is needed for the light to be focused to a point (Airy disk) using a parabolic mirror. It doesn't really need to be coherent like a laser. Not actually having to make it be a laser inherently makes it a simpler and cheaper system. However, we will need to array many copies of the MicroLED's to create a large beam. But when the pattern is repeated, likely the degree of collimation will be degraded somewhat over the entire size of the array. That needs to be determined.

Still, even if there is a lack of collimation over a large array, we can produce a large collimated beam from the individual collimated beams using an optical element called a collimator: 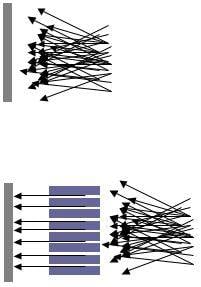 There is the question of whether non-coherent light will have worse disperion through the atmosphere. However, this report discusses experimentation that suggests atmospheric dispersion is actually worse for lasers than for noncoherent light generated by LED's. See for instance the video in Fig. 2 on this page:

Another possible advantage of just using LED's rather than going for a laser is that LED's can have high efficiency, as much as 80%, though the efficiency of the InfiniLED's isn't specified. Lasers on the other hand typically only have an efficiency of 30%.

There is also the cost advantage of just using LED's instead of actual lasers. The cost for LED's is about $1 per watt. Then potentially the cost of the beam itself might only $5 billion for the 5 gigawatt installation for a 5 metric ton launcher. This is within the range for the development cost of a new orbital launcher.

However, the microLED's are a new development so their cost might be above the $1 per watt level. Still, Apple is expected to start soon on large scale production of microLED's for use in cell phones, tablets, and TV screens. This will tend to drive down costs.

The large power requirements would be for launching large payloads such as manned capsules. But there is a market for small payloads. In fact, the DoD has funded programs to develop launchers for payloads in the range of 25 kg to 40 kg at a ca. $1 million launch cost. None of the funded programs have succeeded so far but this cost and size range should now be well within the capabilities of laser launch. A 25 kg payload at the 1 MW per kg measure would require 25 megawatts of laser power, or perhaps of 75 megawatts of thermal power if the electrical power required is provided by a gas turbine.

But gas turbines at this power range are available for sale at the few tens of millions of dollars cost range:

Since these are designed to operate continually they could provide thousands of shots. They would also satisfy the DoD requirement of "launch on demand".

Laser Defense Application.
With Iran and North Korea possibly acquiring the capability to deliver nuclear tipped ICBM's, the need for missile defense becomes more urgent. A promising program for this wound up being cancelled:

27 Sep 2017 | 15:11 GMT
Laser Weapons Not Yet Ready for Missile Defense.
Prototype laser weapons can zap drones from the sky. But they won't protect the U.S. from North Korean nuclear missiles.
https://spectrum.ieee.org/tech-talk/aerospace/military/no-quick-laser-missile-defense

This was a megawatt-class laser carried on a modified 747. However, to be effective it would have to have 20 to 30 times more power than that. But the InfiniLED's can manage 3 megawatts per square meter. So to get a 20 megawatt beam you would only need a 2.5 by 2.5 meter array of InfiniLED's.

There was also a problem with the power requirements at lightweight as discussed here:

As described here we already have well above this capability for power production/conversion:

Space Solar Power Application.
In this blog post I suggested we have the capability for space-based solar power:

The reason was the huge mass thought to be needed for lofting the required solar cells can be drastically reduced by using nanotube-based mirrors as solar collectors to focus the light on much smaller solar cells.

Now with beamed propulsion the cost to orbit is reduced even further, in fact approaching just the energy cost to orbit with multiple launches. With orbital assembly you wouldn't need gigawatt,  multiton launch installations. You could send very many tens to hundreds of kilo mass payloads to orbit to be assembled into the solar collector arrays. With the payloads in this size range you could use gas turbines to provide the power supply to make continuous launches.

However, a key aspect was left out of that earlier post: the transmission of the power back to Earth. But we now have the capability of making high power collimated light beams at lightweight as well.