Advantages of Altitude Compensation.
Methods of altitude compensation such as the aerospike or aeroplug have been investigated for decades now. The idea behind altitude compensation is that rocket engines get their best performance at high altitude, in near vacuum conditions. Because of the physics, this will be when they use large nozzles. However, such large nozzles can not be used on the ground because they can cause dangerous flow instabilities that can actually rip apart an engine.

A disadvantage though is that it requires a toroidal combustion chamber or numerous small engines arranged around a central spike that can act as a toroidal chamber.

Example of an aerospike nozzle with a subsonic, recirculating flow [from Hill and Peterson, 1992]

Another possible way this would work be an inflatable nozzle such as investigated by a Goodyear aerospace division back in the 1970's.

Another discussion of it appears in this report that discusses both the aerospike and the inflatable nozzle: 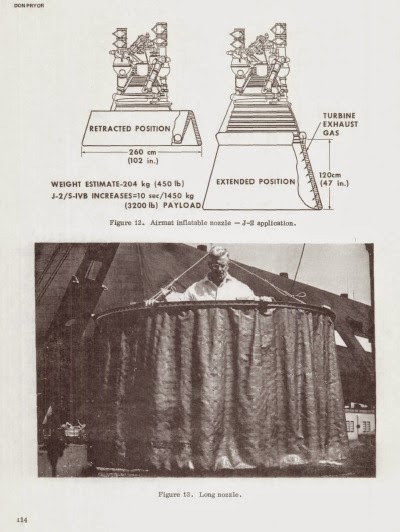 Another possibility would be the high temperature ceramic discovered by mathematician/engineer GW Johnson. According to Johnson it is extremely lightweight:


BTW, instead of it being inflatable it may work for the extendable nozzle to be folded up and gradually extended by mechanical actuators as the rocket gains altitude.

Note that the 100% increase in payload using altitude compensation for a single stage vehicle compared to the 25% increase for a multistage has importance in relation to the usefulness of SSTO's.  In the "The Coming SSTO's: Falcon 9 v1.1 first stage as SSTO, Page 2" post I calculated that taking further into account the fact that a reusable first stage has to reserve propellant to return to the launch site, thus losing payload, a reusuable SSTO can get better price per kilo than a reusable multi-stage vehicle.

However the 25% increase in payload for a multi-stage vehicle has importance to their use as well. For the the F9 expendable this would put it in the payload class of the Ariane 5 at ca. 20,000 kg. The F9 is a much cheaper rocket than the Ariane 5 at $56 million compared to $200 million, but the Ariane 5 has an advantage in being able to lift heavier payloads. If this relatively low cost addition to the F9 would give it the same payload capacity as the Ariane 5 but at only one-fourth the price, then the Ariane 5 could become completely obsolete.

However, such altitude compensation should also be applied to the Ariane 5 as well. Assuming this would also increase its payload by the approx. 25%, this would give it a payload in the 25,000 kg range. The importance of this is that the ESA intends to spend ca. $1.35 billion to develop the Ariane 5 ME to give the Ariane 5 an additional 20% payload capacity. Then a just an altitude compensating nozzle attachment to the core stage and side boosters engines could accomplish that or better at a much lower cost.

Only one company seems to have realized the usefulness of altitude compensation even for multi-stage rockets and that is the smallsat launcher start-up, Firefly Space Systems. They propose to use multiple small engines arranged around a central spike or plug.

This method could also be used on the F9 first stage though you would have to remove the center engine. This would appear to reduce the thrust on the first stage. But at least in regards to the vacuum thrust the loss could be minimal. The reason is by using altitude compensation you improve the vacuum Isp and thrust of the engines. For instance if the Isp can be increased to the 340 s Isp of the Merlin Vacuum compared to the usual 311 s Isp of the Merlin 1D, then removing the center engine reduces the thrust by a factor of 8/9 but the altitude compensation improves the thrust by a factor of 340/311 resulting in a change of thrust of (8/9)*(340/311) = .97, only a small reduction.

However, it is known that the aerospike does not fully recover the performance of a full vacuum-optimized bell nozzle. Then methods that use an adaptive nozzle might be preferred. However, each of the 9 engine nozzles expanding to an vacuum optimized nozzle probably wouldn't fit within the F9's diameter. Another way it could be done would be to use a single large nozzle for all the engines. According Phil Bono, progenitor of so many SSTO concepts, this could actually improve your Isp:

This would appear to increase the stage weight in having such a large nozzle but actually you either remove the original nozzles entirely or cut off a significant fraction of their length under this proposal. Either of the methods of having adaptive nozzles of having a nozzle extension that moves into place at altitude or an inflatable nozzle could be used in this scenario. 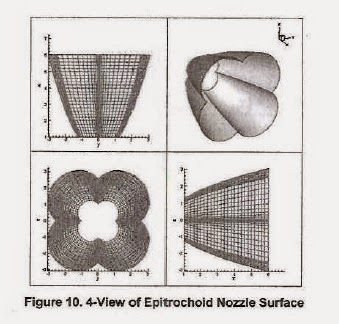 The title refers to the lobed shape of the nozzle. According to the authors this shape improves performance.

1.) One possibility would make a slight adjustment to NASA's conical inflatable heat shield. Notice it consists of a series of increasing diameter inflatable tubes.

Then we could obtain the bell shape by moving the tubes slightly downward and inward so that a bell-shape is obtained rather than a conical one.

2.)Another possibility is suggested below.

The proposal would have various means of achieving this variability. One method would have it be hollow filled with either gas or liquid. Then change in size would be accomplished by varying the amount of contained fluid.

However, nozzles should have a certain curvature, i.e., bell shape, to optimize the exhaust flow velocity and direction. Simply increasing the fluid content would just lengthen the nozzle, without maintaining the optimal shape. Then the proposal is make the nozzle of varying wall thickness so that the thinner wall sections would lengthen more and the thicker parts less, thus resulting in a curved shape.

This method of using fluid to change the shape would also have the advantage that the fluid could be made to flow within the hollow nozzle to cool it if needed. However, the adaptive nozzle could be attached to the bottom of a regular, short, first stage nozzle. As exhaust gases reach the end of a nozzle, they cool. Then with the high temperature resistance of this material no special extra cooling may be needed.

An alternative method of using this material for an adaptive nozzle would be to simply stretch it over a metal framework in the shape of an extended nozzle. Then actuators would be used to pull the elastic material over the framework, thereby maintaining the optimal shape.

However, as described in the research reports on this nanotube rubber, it is susceptible to burning in an oxygen atmosphere as the carbon nanotubes themselves are. One approach to address this issue would be to apply coatings to it to prevent oxidation or burning as done with the carbon-carbon composite leading edges on the space shuttle wings and with graphite nozzles on solid rocket motors. A question here though is whether the coating would be susceptible to cracking when the nozzle is stretched or compressed, though this might be addressed by actually infusing the coating throughout the material during the formation process.

Another approach would be to adapt this method of producing high temperature rubber using nanotubes or nanofibers to using different materials other than carbon. For instance it has long been known such nanoscale tubes or “whiskers” can be made of metals such as iron and tungsten. Nanotubes have also been made of boron nitride and silicon, which might be used for the purpose. The carbon nanotube rubber obtains its elasticity from the multiple connections and reconnections formed among the individual nanotubes as the material is stretched and compressed. Then the same principle may work using nanoscale fibers of materials other than carbon.

There is an analog to this in a recent development involving aerogels. A NASA research team wanted to produce aerogels like those used on the shuttle insulating tiles but with higher strength and more flexibility. An approach that worked was to use polymers to form aerogels replacing the silica commonly used in aerogels, [4].

3.) Another approach would be to maintain the gradually increasing diameter of a bell nozzle internally:
Altitude compensation nozzle by internal adjustable spike(patent pending).
Firstly, another problem with the aerospike is that it has to do the pressure variation all the way from the 100 to 200 bar combustion chamber pressure to the pressure of the vacuum. It would be simpler if it only had to do this from, say, atmospheric pressure to the vacuum.

Then we will attach our altitude compensation extension to the bottom of a regular nozzle, not to the bottom of the combustion chamber. The method will use a widened bell shaped extension, wider than a usual bell nozzle of comparable size. But inside there will be a variable position or expandable spike. This spike will be moved or expanded as the altitude changes to obtain the correct area ratio for that altitude. 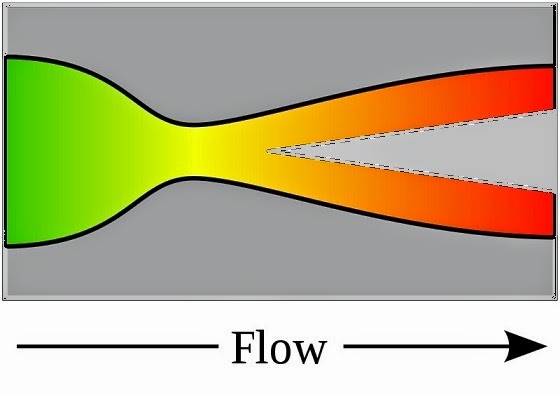 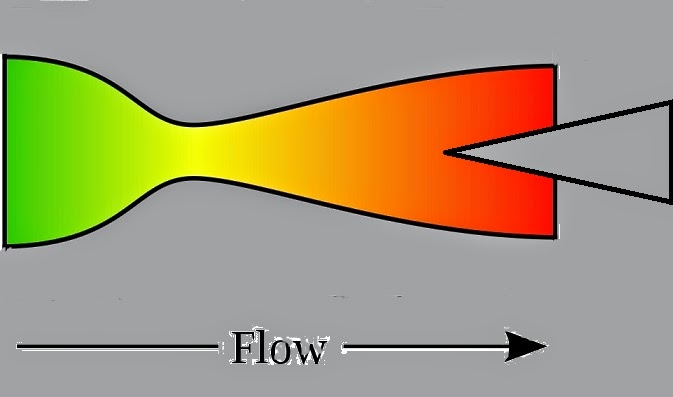 The appearance would be like an aerospike pointing inwards towards the engine instead of outwards. The spike would be shaped so that as it is either moved up or down or expanded in or out, it would maintain the desired area ratio by the area between the outer bell-shaped nozzle and the inner spike.

As indicated there are two methods being considered for varying the area ratio. One by moving the inner spike in and out, and secondly by expanding/contracting it.  For this second method there are a couple of ways to do it. You could have it be filled with a fluid and expanded or contracted by varying the amount of fluid.  Or you could have it in the form of an expandable structure such as an umbrella.

All of these methods would require a temperature resistant material for the spike. There are various high temperature canvas-like materials that can be used,for instance, the materials currently being investigated by NASA for inflatable heat shields. Another would be the tufroc material used on the X-37B. Still another might be the toughened ceramics being studied aerospace engineer G.W. Johnson. Lastly, what might also work would be the high temperature carbon nanotube rubber-like material recently discovered discussed above.

However, the key difference is that here the spike would be shaped to give the correct area ratio as it is moved during the flight corresponding to the ambient pressure unlike the pintle used in the exp.-def. nozzle.

Another advantage is that the shocks could be shaped or even canceled out by techniques such as the “Busemann biplane” method. This could result in increased efficiency of the nozzle. 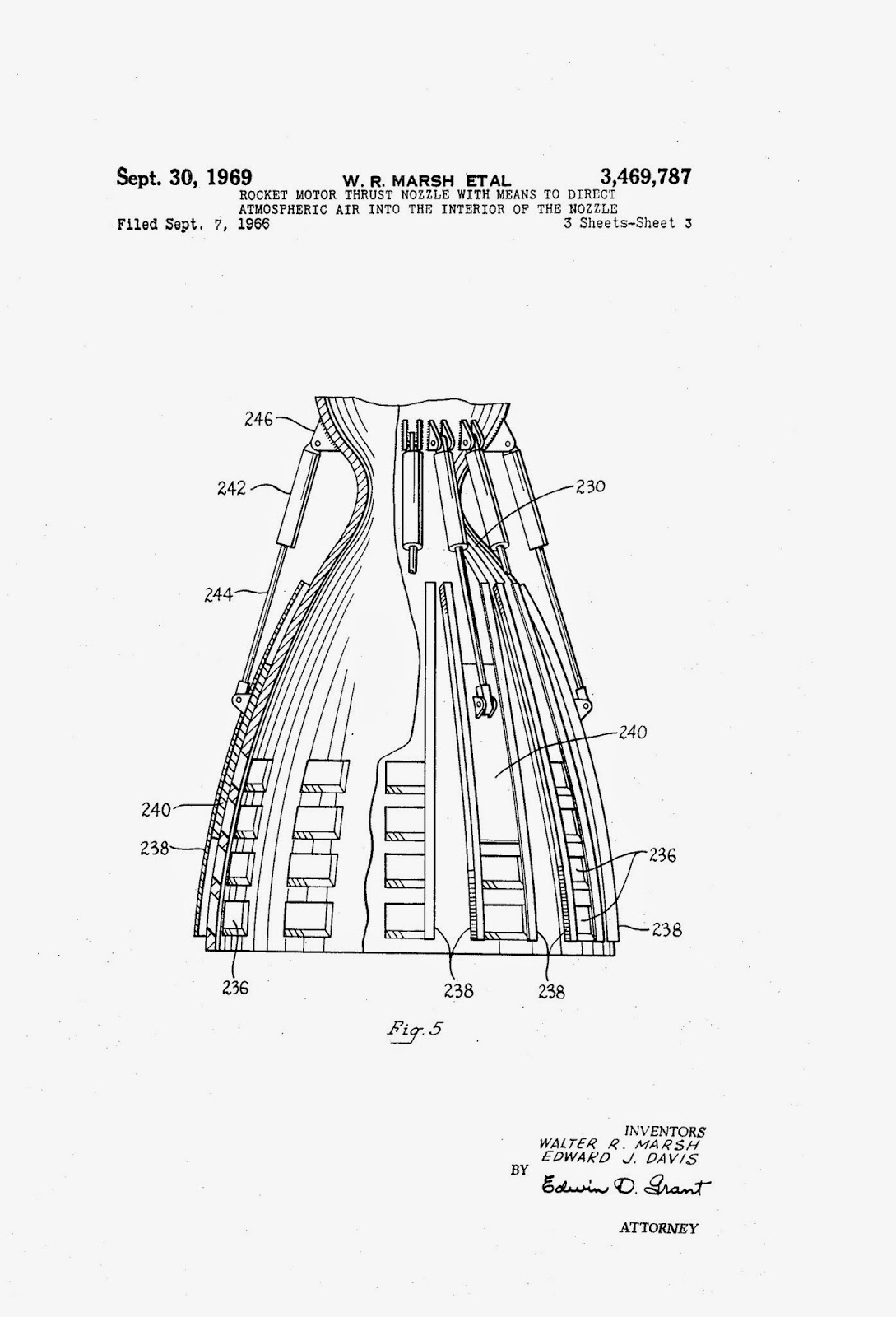