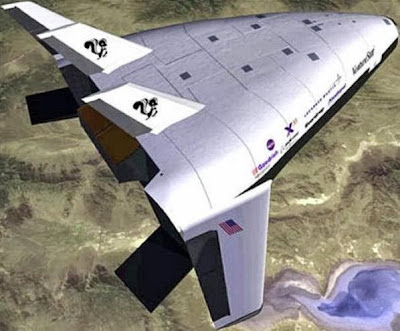 DARPA has announced that it will be funding research into a reusable first stage booster to carry an orbital upper stage. But looking at the specifications of the cancelled programs the DC-X's suborbital follow-on, the DC-X2, and on the X-33 you'll note that they each could have performed this role. This would have led to greatly reduced orbital costs. Then both programs were cancelled prematurely.

The story of the X-33 is well-known now among space advocates:

However, the composite tanks failed on the X-33. Since it was felt the SSTO version could not succeed with regular metal tanks, the program was cancelled. However, in point of fact even if you replaced the failed composite tanks with aluminum-lithium ones the X-33 could still be used as a reusable first stage.

The problem with the tanks is that their unusual conformal shape required them to use greater tank mass compared to the mass of propellant carried than by usual cylindrically shaped tanks:

However, ironically it turned out that the hydrogen tank weight for the X-33 actually went down when replaced by aluminum:

From "X-33/VentureStar – What really happened" :


Faced with a project failure, Lockheed Martin and X-33 NASA managers gave the green light to proceed with the fabrication of the new tank. Ironically this new tank weighed in less than the composite tank – disproving one of the reasons for going with a composite tank in the first place.
While the aluminium LH2 tank was much heavier than the composite tank in the skins, the joints were much lighter, which was where all the weight in the composite tank was, due to the multi-lobed shape of the tank requiring a large amount of surrounding structure, such as the joints. Ironically, the original design of the X-33 on the drawing board had the tanks made out of aluminium for this reason – but the cost played a factor for the potential customer base.

Now choose for the upper stage an efficient cryogenic stage such as the Centaur or the Ariane H10. We'll use Dr. John Schilling's Launch Performance Calculator to estimate the payload possible. Take the specifications for the Centaur rounded off as 2,000 kg dry mass, 21,000 kg propellant mass, 100 kN vacuum thrust and 451 s vacuum Isp. Then the Calculator gives a payload of 5,275 kg to orbit:

Even taking into account inflation the cost should not be terribly much more than that when you also take into account the decrease in price for composites because of their more common use.

The launch preparation costs should also be low since the X-33 was expected to be operated by only a 50 man ground crew compared to the 18,000 required for the shuttle system:

A lower cost launcher could be obtained using a cheaper upper stage, such as the Ariane H10 stage. This is about 12 mT in propellant load and 1.2 mT in dry mass at 445 s vacuum  Isp and 63 kN vacuum thrust. The Calculator gives a payload mass of 3,762 kg.

The cost for the H10 stage according to Astronautix is $12 million. Then the total would be $16.5 million. At a payload of 3,672 kg, this is $4,500 per kilo. This would be a great cut in cost for small size payloads, but the total cost is still too high for the DARPA price requirements.

Another possibility for a cheaper upper stage would be the Falcon 1's first stage. This has a dry mass of 1,450 kg and propellant mass of 27,100. We'll use for it though the upgraded Merlin 1D Vacuum at 800 kN vacuum thrust and 340 s Isp. Then the Calculator gives a payload mass of 5,238 kg.

The latest listed price for the Falcon 1 in 2008 was about $8 million. But we only need the first stage. Elon Musk has said for the Falcon 9 the cost of the first stage is 3/4ths the cost. If also true for the Falcon 1, that would put the cost at $6 million for the first stage. Then the total cost would be $10.5 million, $2,000 per kilo. This is a quite low cost per kilo and it would be a significant advance to have payload this size launched at such low cost, whether or not it would qualify under the DARPA program.
We can get closer though to the DARPA total cost requirement by taking instead the Falcon 1's upper stage. This has a 360 kg dry mass and 3,385 kg propellant mass. The vacuum thrust is 31 kN and vacuum Isp, 330 s. Then the Calculator gives a payload of 959 kg. Taking the cost of the Falcon 1 upper stage as 1/4th that of the $8 million cost of the Falcon 1, this puts the total cost as $6.5 million

This is a little below the DARPA requirement to LEO of at least 3,000 lbs and at a cost a bit above the $5 million limit, but likely tweaking the sizes of the lower and upper stages can get them within the required range.

In regards to changing the size, an ideal solution would be to get an upper stage from a scaled down X-33. This would in fact allow us to get a fully reusable two-stage system. Say we scaled down the size of the X-33 by a half in the linear dimensions. This would give us a vehicle 1/8th as large in mass. Then the dry mass would be 4,000 kg with 12,000 kg propellant mass. Take the thrust as 1/8th as large as well at 300 kN, while using the same Isp 436.5 s. Then the Calculator gives us a payload of 1,902 kg.

Given its 1/8th as large mass, we may estimate the cost to build this half-scale X-33 as $45 million. Using again a 25% price markup over 100 flights, that would be $560,000 per flight. This then would be quite close to the total cost range requirement for the DARPA program.