SpaceX Dragon spacecraft for low cost trips to the Moon. 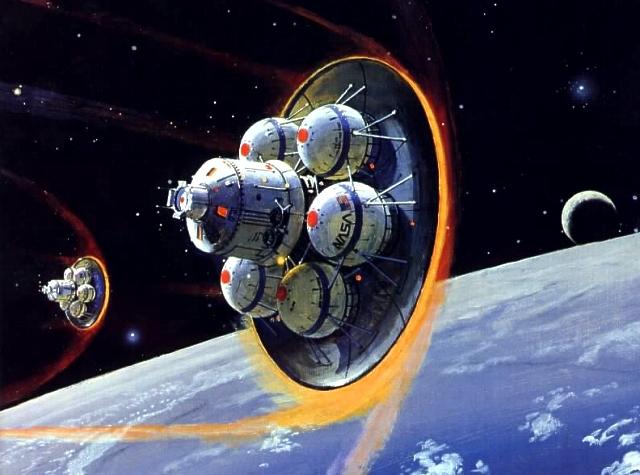 
SpaceX has said two Falcon Heavy launches would be required to carry a manned Dragon to a lunar landing. However, the 53 metric ton payload capacity of a single Falcon Heavy would be sufficient to carry the 40 mT (Earth departure stage + lunar lander) system described below. This would require 30 mT and 10 mT gross mass Centaur-style upper stages. This page gives the cost of a ca. 20 mT Centaur upper stage as $30 million:

The 53 mT to LEO capacity of the Falcon Heavy would also allow large lunar cargo transport using two of the 20 mT gross mass Centaurs that already exist either using the Dragon to carry the cargo or by carrying somewhat more cargo just within a lightweight container.

An important cargo delivery to the Moon would be in-situ resource utilization (ISRU) equipment, specifically for producing propellant from the water discovered to lie within the shadowed craters near the lunar poles. Elon Musk has said a key goal of his is to mount a manned Mars mission within 1 to 2 decades. Such a mission could be mounted more cheaply if the large amount of propellant required did not have to be lofted from the Earth's deep gravity well but could be taken from the Moon.

Another important cargo delivery would be to carry a rover that could do a sample return mission from the near polar locations. Lunar orbiter observations suggest there may be valuable minerals concentrated in such locations:

SCIENCE -- October 21, 2010 at 2:05 PM EDT
Moon Blast Reveals Lunar Surface Rich With Compounds.
BY: JENNY MARDER
"There is water on the moon ... along with a long list of other compounds,
including, mercury, gold and silver. That's according to a more detailed
analysis of the chilled lunar soil near the moon's South Pole, released as six papers by a large team of scientists in the journal, Science Thursday."
https://www.pbs.org/newshour/science/its-confirmed-there-is-water

If these tentative detections could be confirmed then that could possibly form a commercial market for flights to the Moon.

Riches in the Sky: The Promise of Asteroid Mining.
Mark Whittington, Nov 15, 2005
http://www.stepbystep.com/Riches-in-the-Sky-The-Promise-of-Asteroid-Mining-133440/

It is quite important to note then that since the delta-V requirements to some near Earth asteroids is less than that to the Moon, that the sample return version of the lunar lander could also be used to return samples from the near Earth asteroids. If these asteroidal detections could be definitively confirmed by a sample return mission then that would provide further justification for private investment in lunar propellant production installations.

SpaceX expects to launch the first Falcon Heavy in 2013. Because the required Centaur stages already exist it is possible that a lunar lander could be formed from such mated together stages within this time frame at least for a unmanned cargo version.

It is important though that such a lander be privately financed. Because the required stages already exist I estimate a lander could be formed from them for less than a $100 million development cost. This is based on the fact that SpaceX was able to develop the Falcon 9 launcher for about $300 million development cost. And this required development of both the engines and the stages for a 300 mT gross mass and 30 mT dry mass launcher. But for this lunar lander, the engines and stages already exist for a total 40 mT gross mass and 4 mT dry mass system.

If the system were to be government financed then based on the fact that SpaceX was able to develop the Falcon 9 for 1/10th the development cost of usual NASA financed systems, the cost of the lander would suddenly balloon to a billion dollar development.

But asteroidal mineral retrieval flights could be launched much more cheaply if the propellant could be obtained from the Moon. Then there is a strong financial incentive to produce ISRU installations on the Moon which would require lunar return missions from the shadowed crater regions to assess the best means of harvesting this lunar water for propellant. If such return missions also confirm the presence of valuable minerals in the shadowed craters then that would be like icing on the cake for justification of private investment in such missions.

CALCULATIONS.
The Orion spacecraft and Altair lunar lander intended for a manned Moon mission are large craft that would require a heavy lift launcher for the trip. However the Dragon capsule is a smaller capsule that would allow lunar missions with currently existing launchers.

The idea for this use would be for it to act as a reusable shuttle only between LEO and the lunar surface. This page gives the dry mass of the Dragon capsule of 3,180 kg:

The wet mass with propellant would be higher than this but for use only as a shuttle between LEO and the Moon, the engines and propellant would be taken up by the attached propulsion system. With crew and supplies call the capsule mass 4,000 kg.
On this listing of space vehicles you can find that the later versions of the Centaur upper stage have a mass ratio of about 10 to 1:

The Isp's given for the RL-10A engines used on these stages are around 450 s, but an updated version with a longer, extensible nozzle has an Isp of 465.5 s:

This page gives the delta-V's needed for trips within the Earth-Moon system:

The architecture will be to use a larger Centaur upper stage to serve as the propulsion system to take the vehicle from LEO to low lunar orbit. This larger stage will not descend to the surface, but will remain in orbit. A smaller Centaur stage will serve as the descent stage and will also serve as the liftoff stage that will take the spacecraft not just back to lunar orbit, but all the way to back to LEO. The larger Centaur stage will return to LEO under its own propulsion, to make the system fully reusable. Both stages will use aerobraking to reduce the delta-V required to return to LEO.

The price for these launchers is in the range of $100-140 million according to the specifications on this page:

Two would be in the range of $200-$280 million. The Dragon spacecraft and Centaur stages being reusable for 10+ uses would mean their cost per flight should be significantly less than this. This would bring the cost into the range affordable to be purchased by most national governments.

Still, it would be nice to reduce that $200 million cost just to bring the propellant to orbit. One possibility might be the heavy lift launchers being planned by NASA. One of the main problems in deciding on a design for the launchers is that there would be so few launches the per launch cost would be too high. However, launching of the propellant to orbit for lunar missions would provide a market that could allow multiple launches per year thus reducing the per launch cost of the heavy lift launchers. For instance, the Direct HLV team claims their launcher would cost $240 million per launch if they could make 12 launches per year:

Reduction of the per launch cost for the heavy lift launchers would then allow affordable launches of the larger spacecraft and landers for lunar missions.